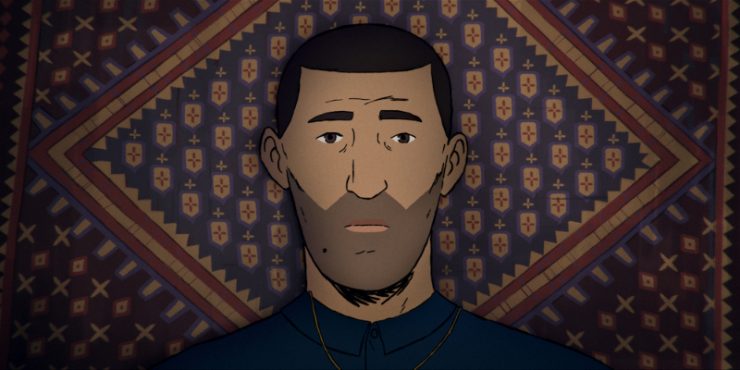 Flee transcends the arbitrary constrictions of film genre, using animation and dramatic reenactments to tell a harrowing migrant story. Through interviews with his friend, Amin (at the beginning, the film says that names are changed for the protection of the cast), director Jonas Poher Rasmussen pieces together the troubling details of Amin’s adolescent journey from a war-torn Afghanistan to post-soviet Russia and, finally, to refugee status in Denmark. Though details are avoided, we can tell by the candor of the interviews that Jonas and Amin are very close, but Amin has kept his story under wraps for their entire friendship. Finally willing to open up, Amin allows Jonas to tell his story cinematically, crafting a ravishing but daunting portrait of self-discovery.

In contemporary Copenhagen, Amin lives a presumably happy life, engaged to his boyfriend Kaspar and giving talks in the United States. Once again, details on Amin’s profession are sparse, but he appears to be successful. Despite all this, Amin is riddled with inner conflict, and as the true story of his past comes to light, it’s clear that demons from his childhood still haunt in vibrant and painful ways. Jonas thought he knew at least general facts – that Amin’s entire family was killed, that his friend’s existence is racked by grief and trauma – but the truth ends up becoming much more complex, even more difficult to reconcile than you’d already expect.

Flee often contrasts Amin’s life as a refugee with his life as a gay man. Both aspects cause him consternation as a teenager, and one finds itself affected by the other in unexpected ways. As Amin’s story unfurls (now it’s my turn to be scant with details), it becomes a much fuller portrait than what we think we know about migrants. In telling this personal story with such vulnerability, Rasmussen pays dividends toward each individual’s journey away from war and oppression, breaking up the monolithic imagery of the desolate, trafficked masses. Flee both acknowledges the unspeakable tragedy but lingers on the perseverance, humanizing Amin but also humanizing anyone who’s victimhood has been so readily portrayed. In this way, Flee is very defiant in the face of most migrant stories, giving it an edge that takes Flee to another level.