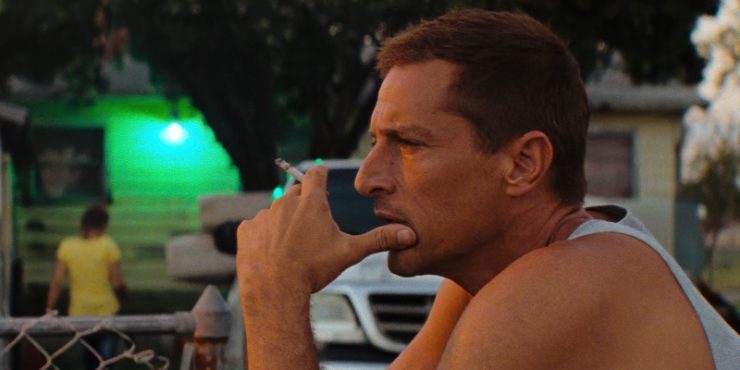 The protagonist of Red Rocket is so incredibly shameless, a bottomless pit of delusion and self-indulgence. His name is Mikey Davies but he’s better known as Mikey Saber, a multi AVN Award-winning porn star who’s spent over a decade in the business, playing alongside all the heavy hitters. In his mind, he is more than just an adult film actor; he’s a talent scout and developer, a content producer and – in his own warped definition of the word – an entrepreneur. There’s no real evidence of this in Red Rocket, which opens with him sleeping on a bus in Texas City, TX, his face bruised and his clothes tattered. Played with unwavering energy by Simon Rex, Mikey has only his volcanic ego to fall back on, humbly returning from California to his childhood home, desperate to start anew.

This is the latest from Sean Baker, who knows a thing or two about difficult protagonists with NSFW job descriptions. His 2012 film, Starlet, was also about a porn star (played by Dree Hemingway) who starts an unorthodox relationship with an elderly woman. His two biggest films, Tangerine and The Florida Project, were stories involving prostitution in direct and tangential ways. Humanizing sex workers has become his forte, as well as an exciting visual style despite scant resources (Tangerine was famously shot on an iPhone). Red Rocket is the only of one these films that focuses on a man and that’s an important distinction. Where Tangerine and Starlet found exit ramps to empathy for their troubled leads, Rocket sinks into Mikey’s despicability, his grandiose vision of himself being the engine that makes the story go.

Even at his most pathetic – banging on the front door of his estranged wife’s house, penniless, and having not showered in days – Mikey still manages to be cocksure and condescending. Homeless, he begs for the mercy of his wife Lexi (Bree Elrod) and her mother Lil (Brenda Deiss), and doesn’t exactly win them over as he does wear them down. Once inside, he spouts promises of finding a job and helping with rent. That proves difficult, as Mikey’s reputation precedes him, both as a porn star and as a former teenaged Texas City troublemaker. He eventually reconnects with a local drug supplier, Leondria (Judy Hill), who reluctantly gives him a job. Ever resourceful, Mikey moves her product quickly and efficiently, giving Lil the rent that he promised and giving Lexi hope that Mikey could be something more than a deadbeat husband.

That dream falls apart when Mikey meets Strawberry (Suzanna Son), a seventeen-year-old who works at a donut shop. Stunned by her doughy eyes, her vibrant red hair and prodigious freckles, Mikey immediately sees a path back to the top. His pursuit of Strawberry is instant and aggressive, and she is responsive. She enjoys his chiseled good looks, his impressive physique, and his gift of gab, but he is envisioning much more. To Mikey, Strawberry is a five-star porn prospect, a possible megawatt star that only needs his guidance to reach legendary status. As soon as the thought enters his mind, all plans to redefine himself with Lexi fall aside, and his seduction of Strawberry kicks into high gear. All things appear to be lining up perfectly for Mikey, who sees more AVN awards in his future, but we all know that’s not how it will end.

And that downfall, when it comes, feels more than welcome. Baker’s expertise for humanist storytelling is meant to make you feel uncomfortable, to bristle at the hero’s untidy path toward grace, but the ick factor in Red Rocket is sky high. The film dares its audience to be judgmental at its own peril, but by the film’s second half, I was essentially begging the film to give Mikey his comeuppance. The porn actor’s talent for emotional manipulation (which ties into his penchant for sexual exploitation) leads Lexi into fraught psychological spaces, and convinces Strawberry that he is something more valiant than a red district weed dealer. A friendship with a local boy named Lonnie (Ethan Darbone) proves he isn’t just this way with women, using the young man for rides and as a personal ego booster. Lonnie worships Mikey’s local-boy-turned-sex-god narrative, and Mikey pounces on that. Let’s just say things do not end well for Lonnie.

Mikey’s behavior is often played for laughs, but Red Rocket side-steps a much darker reality about men like him. The disturbing detail of Strawberry being seventeen is paid little lip service other than taking pains to point out that it’s the legal age of consent in Texas. Putting aside the fact that Suzanna Son herself is actually in her mid-twenties, Baker makes a point to both emphasize her petite girlishness and her own sexual agency (when the relationship begins in earnest, it’s Strawberry who makes the first move). The combination is already a major porn staple, so no wonder Mikey thinks she’s got the goods to go pro. But I don’t think Red Rocket really ever gets a good handle on what Strawberry actually wants. Is she actually won over by his charm? Or is he a tantalizing ticket out of Texas City?

This feels like a step back for Baker. Rocket understands that Mikey is a particularly tragic American character, but the film’s comedic instincts neuter the effect. The performances from Rex and Son are great, and Elrod and Deiss, whose mother-daughter relationship is compelling both with each other and with Mikey, are especially good, but to what end? The movie takes place in the Summer of 2016, which allows us to see multiple clips from that doomed presidential campaign. Why, it’s hard to say; perhaps to show how tectonic political moments mean little to people like this – the effect was lost on me. There is less purpose here than with Tangerine or Starlet, and it doesn’t have Florida Project‘s innocent purview. Baker’s films often contain a real human honesty, shining light on people and professions we usually like to keep hidden away, but there is something forced in Red Rocket, daring you to admit that you’re captivated by this terrible man. I dare to admit that I was not.