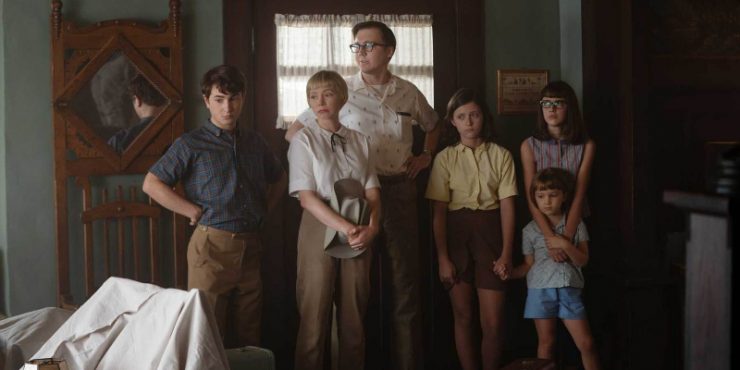 The name ‘Steven Spielberg’ is synonymous with the best in Hollywood filmmaking. Other than Hitchcock, Spielberg’s name may be the first most people think of when they think of “movie director”. We are getting close to fifty years of legendary, uncommonly sustained success – both artistically and commercially – for Spielberg who, at age 75, refuses to behave as if his best years are behind him. The Fabelmans, his latest film (released less than a year after his triumphant remake of West Wide Story), is his autobiographical film, an auteurist tradition as old as time. The film is his exploration of memory as told through the lens of a single Jewish family living in post-war America. His career, filled with escapist classics like Raiders of the Lost Arc and Jurassic Park, seldom approaches this level of intimacy. His comfort level has more often been in telling stories outside of his own experience, but as The Fabelmans shows us, that reputation may be more mythology than reality.

Sammy Fabelman (played first by Mateo Zoryon Francis-Deford) lives with his family in 1950’s New Jersey. His father, Burt (Paul Dano), is a computer engineer working on the cutting edge of an exciting technological revolution. His mother, Mitzi (Michelle Williams), is a pianist who fell short of her dreams of artistic stardom but whose joie de vivre is the spark that lights up the whole family. When they decide to take Sammy to his first movie, Cecille B. DeMille’s The Greatest Show On Earth, the young boy instantly falls in love with the movies. He is particularly obsessed with an elaborate train crash scene, whose violence and realism holds him completely enrapt. When Burt gets Sammy a full train set over the course of Hanukkah, the first thing Sammy does is try to recreate the scene. With some help from Mitzi, and the use of Burt’s 8mm camera, he manages to pull it off, making the first film of his life. But it certainly wouldn’t be the last.

As Sammy gets older (now played by the terrific Gabriel Labelle), Burt’s position in the burgeoning fields of computers gets him exciting new positions, but also forces the family to move West, first to Phoenix and then to Northern California. All the while, Sammy’s obsession with filmmaking only grows, acquiring new, better cameras and convincing his parents to get him a moviola editing machine. Burt, ever practical, wants Sammy to be thinking beyond his “hobby”, and to start considering a more pragmatic career path. Mitzi, much more romantic, wants only to encourage Sammy’s endeavors. “In this house, it’s the scientists versus the artists,” Mitzi explains, “Sammy’s on my side”. As the push-and-pull of his well-meaning parents stretch him in opposite directions, Sammy gets his own education on the reality of his parents’ lives. As he matures, so too does his understanding that they are not simply his parents but individuals with their own fears and desires. Unsure how to comprehend it, he turns towards the movies, his obsession helping him cope with uncomfortable truths.

Spielberg is a credited screenwriter on Fabelmans (something that hasn’t happened since 2001’s A.I.: Artificial Intelligence) alongside Pulitzer-winning playwright Tony Kushner. This is the fourth film that Kushner has written for Spielberg (the others being Munich, Lincoln and the aforementioned West Side Story), and their collaborations may represent the best of what Spielberg has produced in this latest stage of his career. The Angels in America writer has an innate sense of structure, a brilliance with metaphor, and (perhaps most important) is consumingly in touch with the humanity of his characters. While his plays and scripts may often inspire tears, it never feels cheap or sentimental. Working alongside Spielberg, and tracing the contours of his family’s life, what Kushner constructs most is an emotional story of how young Sammy’s work behind the camera was all he could do to make sense of the life that was happening in front of it.

It is perhaps a massive expression of ego to make a film about your childhood and to represent yourself as a preternatural cinematic genius, but Spielberg pulls it off. For one, the very skill throughout The Fabelmans (back with his usual cinematographer, Janusz Kaminski) is enough to prove that he has the goods. For another, he and Kushner structure the story beautifully, artfully showing the ways his family’s successes and struggles were applied directly into his filmmaking. We’ve all heard the stories of Spielberg’s wunderkind years, but The Fabelmans is a family story first and movie-making story second. As Sammy, Gabriel Labelle gets the unenviable task of bringing this to life on screen. I’ve never seen Labelle in anything before, but his performance, perfectly sweet and vulnerable, is an incredible introduction, wonderfully articulating the vanity and insecurity that comes with being a cherished prodigy at such a young age.

Dano and Williams, playing the North and South poles of Sammy’s young life, are both stunning. Dano, one of our steadiest and most dependable character actors, is heartbreaking in his portrayal of Burt. Brilliant at his career but naive in his dealings with his family, Burt’s discouragement of Sammy’s directing might make him the villain of the story, and many actors may have played it that way. Dano, playing against that, instead gives Burt an aching sympathy, a man whose intelligence fails to alert him to the glaring problems right in front of his eyes. Williams, an actress whose brilliance is well-recorded, ends up being the true star of The Fabelmans. Mitzi’s flair for the dramatic entertains the Fabelman clan, but her wearying melancholy is never far behind, weighed down by the loss of a life she never got to have. It’s Mitzi’s behavior that gives this movie its biggest push of plot (and I’ll keep it spoiler free here), and Williams understands brilliantly how to play this fascinating character’s imperfections.

The entire ensemble cast is incredible in The Fabelmans. This includes Julia Butters and Keeley Karsten as Sammy’s younger sisters, Natalie and Lisa, both equal parts loving and exasperated, willing actors for Sammy at first, they quickly grow restless with their brother’s obsession. Seth Rogen plays Benny, a family friend and work companion of Burt, whose ties to the Fabelman family ends up presenting an unavoidable complication. Jeannie Berlin gets a few scenes as Burt’s piercing mother, whose skepticism of Mitzi proves prophetic. In a startling ten-minute sequence, Judd Hirsch arrives and plays Mitzi’s long-lost uncle Boris, a circus performer who sits Sammy down and explains to him in plain (if harsh) detail about the sacrifices of an artist’s life. It’s a brilliant turn from the veteran actor, who for a brief moment becomes the center of this movie’s universe. Another cameo near the very end of the movie is too good to mention but it might just knock you completely on your ass.

It’s possible that The Fabelmans is too long. At a full two hours and thirty minutes, it makes no effort to hurry, and it’s five-act structure may lead you to think the end might be near when the opposite is true. Like all legendary directors, Spielberg treats final cut as an opportunity to be unwavering about telling a story on his own terms, and that includes keeping scenes for tender, nostalgic reasons that most filmmakers would be forced to sacrifice (see also: two of the last three Martin Scorsese movies broaching the three hour mark). Of the many things that moved me throughout The Fabelmans (and there was a lot), a big part was how caring Spielberg was in his choices, including touching human moments that many films may find superfluous. There are plenty of movies that are too long, but I don’t believe The Fabelmans is one of them, because there is not a single frame that is thoughtless. Quite the opposite, this may be the most affectionately constructed movie of the year, made with the fondness of a devoted son.