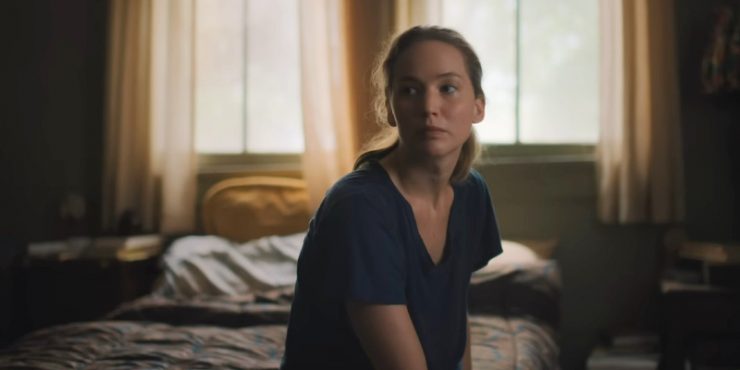 The meteoric rise of Jennifer Lawrence was so fast and furious that it’s difficult to remember that it all started with a tiny independent film called Winter’s Bone. Soon after Bone got her the first of her four Oscar nominations, she was quickly swept up into the franchises of X-Men and Hunger Games, not to mention the chaotic connection to director David O. Russell, which garnered her other three nominations (and her win in Silver Linings Playbook). Lawrence has the talent and screen presence of a bonafide star, and that was proven when she became more famous than any one person should ever be in the mid-2010’s. The overexposure and eventual backlash led to a rocky period which has brought her to Causeway, her first effort as a producer and her first independent film in over a decade. This back-to-basics performance is not only very good but gives us a side of Lawrence we haven’t seen before, trading her natural charisma for measured interiority.

Causeway is the feature debut for director Lila Neugebauer, who’s directed several episodes of prestige television but is most known for her directorial efforts on the stage, particularly the 2018 Broadway premiere of Kenneth Lonergan’s The Waverly Gallery (Elaine May won a Tony for the lead performance). Neugebauer’s reputation for coaxing strong performances probably played a big part in getting to head Causeway, a movie that deals solely with its characters’ unseen struggles. Lawrence plays Lynsey, a U.S. soldier sent home from Afghanistan after a car explosion causes major head trauma and brain bleeding. Her home is in a quiet town near New Orleans, in a house with her mother (Linda Emond), the only one left of a dysfunctional family that triggered initial departure overseas. Lynsey is initially sent to a sort-of veteran halfway house where she undertakes a brutal series of physical therapy to relearn basic functions – even this is preferable to her than returning to that dreaded house she left years ago.

The film’s troubled production – delayed first by Hurricane Barry before being delayed even longer by the oncoming COVID-19 pandemic – forced the story in a new direction. Originally meant to include several flashbacks to Afghanistan and Lynsey’s service, Neugebauer instead stripped the film down to its more basic elements: in particular, Lynsey’s sudden relationship with James (Bryan Tyree Henry), a local mechanic who quickly recognizes Lynsey’s struggles and offers assistance, first with a truck that has broken down before providing rides and other favors. For Lynsey, James provides an outlet to help her hide away from her mother and their civil but fraught home life. For James, Lynsey provides a much needed friend. An amputated leg hints that he may have his own demons, and the two of them provide solace and companionship through their individual crises, becoming a story that very few films explore: the complications within adult friendship.

The film’s script – originally written by Elizabeth Sanders, then re-tinkered by Luke Goebel and best-selling novelist Ottessa Moshfegh – leaves a lot of meat on the bone, and the character psychology that is central to the plot is pretty simplistic. But it ends up mattering little since Lawrence and Henry – two singular, spectacular talents – give such strong performances that flesh out the shallow impressions on the page. Neugebauer’s approach to the material is careful and intimate. Perhaps at times her decisions are too neutral, but she coaxes out a wonderful chemistry between her two leads. Henry, who has shined in FX’s Atlanta but has also proven to be a fine film actor, does a fantastic job, easing into the film’s gravitas while still maintaining a levity that perfectly counterbalances Lawrence’s strict intensity. Lawrence’s performance, so aggressively against type, is deceptive in its quietude. It’s almost like she’s testing herself to see if she can hold an audience without the bombast and charm of her previous successes. Spoiler alert: she can.

This is one of a great many films being distributed by A24 this year. They’ve had a handful of box office triumphs (Everything, Everywhere, All At Once being the prime example) and a few failures (Men failed to win a significant audience and also failed at being a competent film). Causeway was given a microscopic theatrical run before being placed on AppleTV+ this weekend. It’s a bitter reality when a star like Lawrence gets her indie producing debut basically relegated to a streamer. It’s perhaps a way to measure expectations for a strong but muted human drama getting released amongst the heavy hitters of Fall movie season. This is a good, not great, film but it does have performances from two incredible actors whose understanding of the material makes that material better than it actually is. Perhaps Causeway is a much easier pill to swallow than it should be, but it brought Jennifer Lawrence back to a place where the acting is the most important part. No small feat.