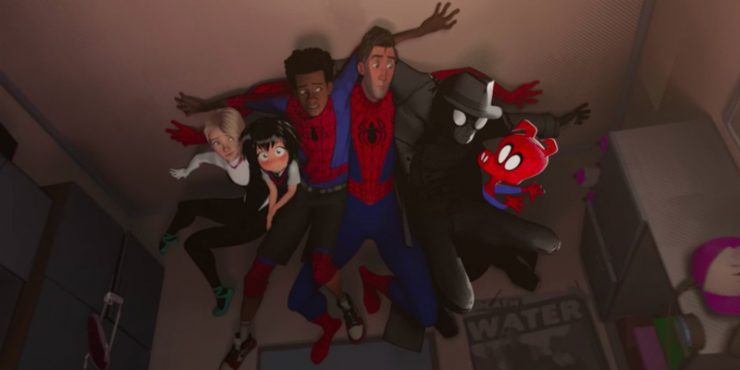 We don’t need a new Spider-Man movie. I’m not sure we ever have. The reason Spider-Man: Into the Spider-Verse works so well is that it seems to understand that. The film – which is produced by Phil Lord and Christopher Miller, and Lord has a credit on the screenplay as well – has a fluid, refreshing charisma that supplements a not-quite satirical view of the Spider-Man oeuvre which pokes fun only so much, but maximizes entertainment. The Lord and Miller style works so well because it is less beholden to monolithic enterprises, which is what has allowed them to make successful films out of things as nebulous as LEGO toys and the Cloudy With a Chance of Meatballs book. Spider-Verse is different though. Its view is narrower, its fan base more demanding. And perhaps that is why they shy away from directing this one, leaving the tender homage to three very exciting filmmakers in Bob Persichetti, Peter Ramsey and Rodney Rothman

There are several different Spider-Men (and women!) in Spider-Verse, and none of them are ones you’d be familiar with from the Spider-Man films of the last two decades. Gone is the nebbish high school charm of Tobey Maguire or the more recent, even more boyish Tom Holland. Our main Spider-Man is Miles Morales (Shamiek Moore), a half-black, half-Puerto Rican teenager from Brooklyn, who gets bit by a radioactive spider while tagging the inside of a MTA subway station. Miles happens to be present when Wilson Fisk (Liev Schreiber), a broad-shouldered baddy, accidentally rips a hole in the time-space continuum, and different Spider-Mans from different dimensions end up arriving in Miles’ world. Still getting used to his newly found powers, Miles learns that heroes can take many different forms.

There’s Peter B. Parker (Jake Johnson at his most Jake Johnson-y), the closest facsimile to the usual thing, except he has burned out, gained a few extra pounds, lost Mary Jane and has a rather tenuous feeling about being Miles’ mentor. There’s Gwen Stacy (Hailee Steinfeld), a Peter Parker love interest in some dimensions, but Spider-Woman in this one. There’s Peni Parker (Kimiko Glenn), a Japanese anime character who comes equipped with a robot whose shape is spider-adjacent. Spider-Man Noir (Nicholas Cage) is a black-and-white gumshoe sporting a trench coat, drawn with Frank Miller-like severity, and boasting a Cagney-esque accent. Lastly, Peter Porker or Spider-Ham (John Mulaney) is a broad, Looney Tunes take on Spider-Man who’s small stature appears to hide great hero-like strength.

The various Spider men and women rotating in and out of the film establishes an absurdity that hasn’t been previously apparent in a Marvel film, and the very nature of it being an animated film separates it from the previous films of the MCU. There is a remarkable uniqueness to Spider-Verse which suggests that this genre has a much wider range than anyone – most importantly, Hollywood executives – had previously realized. The animation style which shows several different forms of 2D and 3D rendering, mostly recalls the panels of a comic book, but the clashing of other forms of CGI and glitch cinema disjoints the imagery, creating the combination of different comic book styles without making the film itself too crowded. Like most Lord and Miller productions, the imagery is dense, with references and easter eggs in every frame, and the way that directors Persichetti, Ramsey and Rothman allow these styles to coexist is exciting, and occasionally breathtaking.

Like Black Panther from earlier this year, Spider-Verse proves that there is still something rather radical about seeing a non-white superhero make these comic book mythologies their own. Miles is torn between his father, Jefferson (Bryan Tyree Henry), who is a stern, disciplined cop and Aaron (Mahershala Ali), his laidback uncle with ambiguous professional obligations who is more encouraging of Miles’ reckless instincts. The choice Miles must make between his two male role models is central to his character, and reflects a decision too many young men of color must make: lawfulness vs. lawlessness. Spider-Verse is less rhetorical in its explorations of blackness than Panther, though, and its cast is much more white, but the way it makes Miles’ race both central to his character and unessential to the plot is one of the script’s greatest achievements.

Like all of these superhero films that aspire for deconstruction, they eventually come around to the same moralities and sentimentalities that they claim to be sending up. By Spider-Verse‘s third act, all of its clever set-ups reveal a much more recognizable conclusion. That doesn’t detract from its cleverness though, and it widely avoids the cynicism of a film like Deadpool. The film also makes an almost touching effort toward creating a credible fictionalization of New York City, more so than any previous Spider-film, focusing less on gleaming skyscrapers and noteworthy locales and more on its placement as an urban mecca. It does its city proud.