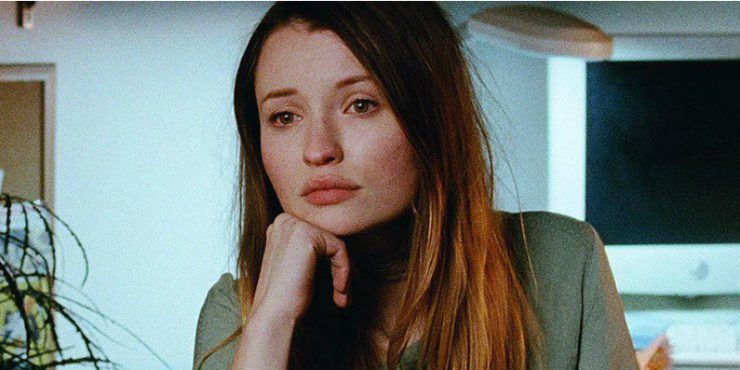 I’m not usually the biggest Alex Ross Perry fan. His films feverishly examine the New York phenomenon of Mild White Affluence, where people work office jobs, drink lots of canned beer and seemingly never have to rely on public transit. They usually want the intellectual elitism of Woody Allen without ever admitting any of the privilege. They have a presumed humility that I’m not totally sure is earned, nor do I tend to think its the best ways to tell the stories he wants to tell. But Golden Exits felt different. It felt honest and refreshing, as if Perry has finally found the cast and material where his dissections of adult petulance can succeed.

The film’s ensemble circles around Emily Browning’s Naomi, an Australian who’s living on a work visa in order to assist Nick (Adam Horovitz) in cataloging a dead man’s archives. That dead man happens to be the father of his wife, Alyssa (Chloe Sevigny), though he has been hired by his sister-in-law, Gwen (Mary-Louise Parker). Naomi’s arrival creates almost immediate tension between Nick and the sisters. For Alyssa, Naomi presents more reason to fear a reprisal of Nick’s past of infidelity with younger women. For Gwen, Naomi is an extra expense in a process she feels is already taking Nick too long to complete. The family is already on shaky ground, and now they’re beginning to crumble.

The only person Naomi knows in Brooklyn is Buddy (Jason Schwartzman), and even that connection is tenuous. He is the son of a friend of her mother’s, but even so, she still wishes to find at least one person who knows her in this exciting, but intimidating city. Buddy runs his own recording studio and works with his wife Jess (Analeigh Tipton), who begins to feel funny about Buddy spending so much time with Naomi, considering how little they actually know each other. Jess’ sister, Sam (Lily Rabe), is a floundering, single personal assistant who frequently visits Jess to bemoan the aimless track of her life. Sam works as a personal assistant, we find out, for Gwen.

The world of Golden Exits is one of duplicity and fear. The characters enact a vicious cycle of dishonesty and mistrust and seem to speak a language almost exclusively comprised of half-truths. The egos of the male characters hurdle violently against the independence and the vulnerability of the women. Confirming Alyssa’s worst fears, Nick is attracted to Naomi, but he is a gray-haired middle-aged man with a tedious, uninteresting job. It’s a hilarious but realistic character flaw that Nick would even begin to imagine Naomi would be interested in him. Meanwhile, Naomi’s curiosity and transient lifestyle leaves her (in her words) susceptible to infatuation. She’s unsure what she even wants out of romance, but is willing to try a few different people, and countries, to find out.

In this film, loneliness is less an affliction than a perpetual state of being. A feeling that permeates through you whether you have found someone to be with or not. The characters search for connection from their spouses, their siblings, and even sometimes in strangers. Golden Exits doesn’t argue against the euphoric feeling of connection, but instead shows it as fleeting, an increasingly mortal experience that always finds its inevitable end. This is more of the kind of relational cynicism that usually turns me off of Perry’s films, but Golden Exits works precisely because it’s honest about its characters feelings and motivations. These seem like real people, instead of his usual New York City affectations; instead of championing a simmering grumpiness, we actually have moments of humane grace.