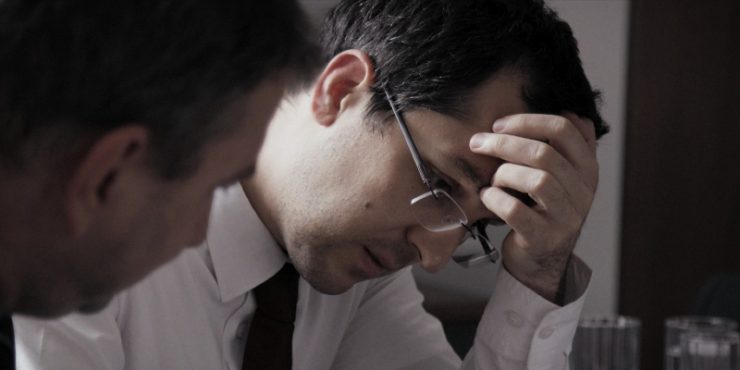 There are moments in Collective that feel unbelievable as you’re watching them. One happens in the first ten minutes. Soon after a metal band finishes their set in a popular Bucharest club called Colectiv, a fire quickly consumes the club. The speed with which the event goes from buoyant to deadly is disorienting and emotionally gutting. A camera catches the ceiling as it’s engulfed in flames within a matter of seconds. Concertgoers panic as they attempt to flee, but Colectiv does not have the proper amount of fire exits. Twenty-seven people are killed instantly and one hundred and eighty are injured. A harrowing tragedy in and of itself, and one that led to the resignation of the Social Democratic government. What was uncovered after this is what makes up Collective, an explosive piece of documentary filmmaking.

The quagmire that is Romanian politics has been covered in many films, some more thoroughly than others. Nationwide corruption has stalled basic social programs and left its population in morose aimlessness. Collective shows that even its press has fallen behind, with the most rigorous reporting coming from its Sports Gazette. Catalin Tolontan, the gazette’s most high profile reporter, decides to dig deeper when victims from the Colectiv fire continue to die in hospitals after the initial tragedy. Months later, thirty-seven more people have perished. Many of these deaths have little to do with the severity of their burns but concern the gross negligence of the hospitals, which leaves patients without proper care, susceptible to bacterial infections which are even more agonizing than the original burns.

The sudden intake of burn victims exposes a gaping hole in hospital management, doctors and hospital managers running the operation with shocking carelessness. The government does its best to hide the behavior, claiming that it’s working to the best of its abilities, but journalists continue to push for the truth. Details come out of government contracts with pharmaceutical companies that dilute disinfectants to the tune of ten times what they’re advertising, leaving hospitals with disinfectants that could in fact cause bacterial growth as opposed to prevent it. The investigation leads to a new health minister, Vlad Voiculescu, who finds the position has less to do with actually helping people receive proper healthcare, but instead fighting political battles, as the corrupt Social Democratic government wages war against those attempting to take them down.

Aside from its footage of Tolontan and his fellow journalists doggedly trying to hold its ineffective government accountable, the most memorable images in Collective are probably of Voiculescu, who’s forced to spend large amounts of his day simply ingesting numerous accounts of misdeeds and incompetence in Romanian healthcare. Doctors and hospital managers work for bribes, leaving patients to the wind. About halfway through the film, footage is released that shows a burn victim growing maggots on his skin after not being properly cleaned for days. Voiculescu doesn’t have the time to dwell in his own exasperation, but he finds it hard considering the awful news he is frequently receiving. Hanging above everything is a new election, one that has the possibility of removing the corrupt government for good and replacing it with something that can actually make a difference.

Governmental dishonesty is so commonplace, it hardly engenders much reaction from the public these days, but director Alexander Nanau shows the dangers of such apathy. As the system becomes further and further infected with greed, there is always a tipping point where people are met with harm. Collective shows how a single tragedy can spiral outward and into a referendum on a nation as a whole. People like Tolontan and Voiculescu come off as idealists in the media, arguing against those who want to keep the status quo, but their noble quests find traction among the people, who are fed up with the dishonesty. Collective‘s thriller-like pace comes from their inability to get complacent.

This is not an optimistic film. But it isn’t cynical either. The frankness with which it shows a problem proves that this event was not an extraordinary accident. Instead, the precision and calm that come from Tolontan and Voiculescu imply a Groundhogs-Day-like misery to the whole thing. Journalists keep exposing Romania’s hypocrisies – agencies devoted to investigating corruptions have it in their best interests to expose as little as possible – only to be outspoken by television media. Voiculescu imposes stricter measures to keep hospitals from mistreating its patients, only to have a Social Democratic mayor rail against his policies (and successfully). More than anything, Collective shows the burden of taking on painful information. Just because you have it, doesn’t mean you have the means to change it. But that doesn’t mean they’ll stop trying.