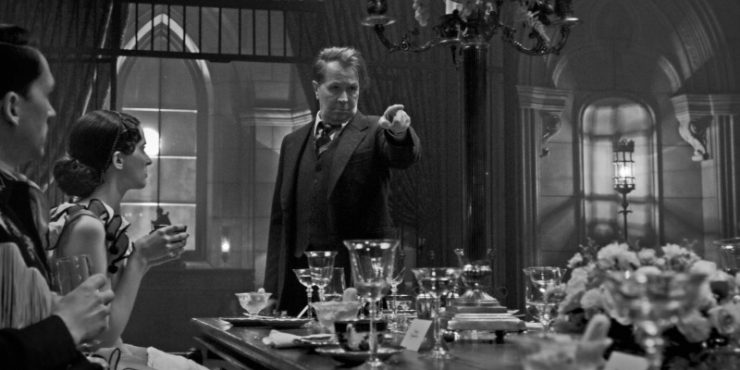 Herman J. Mankiewicz was a movie character long before Mank. He was an invaluable supporting character within the grand epic of Hollywood’s Golden Age, a vibrant Falstaff during the height of the Classical Studio Era. He was charming but brash, a welcome dinner guest with a perpetual talent for overstaying his welcome. He made many friends with his outspoken personality, a trait that also managed to turn a number of those friends into enemies. His courting of danger, his voracious alcoholism, his insatiable gambling appetite, and his bitter cynicism were all part of the illustrious Mank package. It is what brought him into the circles of newspaper tycoon William Randolph Hearst and legendary filmmaker Orson Welles. The famed tempest between Welles and Hearst only began because of Mankiewicz. He knew all the secrets, and was willing to tell them.

Mank purposely relegates the immensely famous Welles and Hearst to being sideline figures. They are now the supporting characters. Gary Oldman plays Mank, some twenty years older than Mankiewicz actually was at the time (when he exclaims “I’m 43”, it’s hard not to gasp). The casting choice is not only a decision for talent – Oldman’s taste for cerebral bombast fits perfectly for the part – but also goes a way toward displaying the consequences of Mank’s self-destructive qualities. He’s said to have always looked decades older than he actually was. Whether that’s true, we get a sense from the beginning that director David Fincher is framing Mank as a man undone by his own brand of wisdom, run through the gears of the Hollywood machine, and is happy at this point to still simply be standing.

What Mankiewicz is most famous for, professionally anyway, is his co-writing credit on Welles’ Citizen Kane. Kane is often cited among the greatest of American films, with Mankiewicz’s contributions bearing a varied degree of responsibility for it. Mank doesn’t spend that much time on Mankiewicz’s supposed battle for credit (famously discussed by Pauline Kael decades after Kane, whose insistence on Mank’s unquestionable stamp on the film made her no friend of Welles), but instead focuses on Mankiewicz’s treacherous writing experience. After a serious car accident leaves him with a broken leg, Welles (Tom Burke) approaches Mank about writing a screenplay for his first film, then titled “American”. It was meant to show the tragic nature of American ingenuity, Shakespeare meets Arthur Miller, and Mankiewicz knew just the figure to base it on.

Mank flashes back and forth between Mankiewicz’s dealings with Hearst (Charles Dance) and MGM studio head Louis B. Mayer (Arliss Howard) in the 1930’s, and being shacked up and bedridden in the Mojave dessert in 1940. He’s been tasked with producing Welles’ screenplay in sixty days. Under the scruples of Welles’ dutiful producer John Houseman (Sam Troughton) and a strict British secretary, Rita Alexander (Lily Collins), Mankiewicz is asked to keep dry so he can produce the script while Welles is doing theater in New York. Struggling under the no-drinking rule, Mankiewicz does less writing and more daydreaming about his days within the inner circle of Mayer and Hearst. Finding their glamour and indulgence distasteful, Mankiewicz still enjoyed the closeness to power, as if it legitimized his own flamboyant behavior. He once vomited vociferously on Hearst’s dining room floor.

Mankiewicz makes particularly good friends with Marion Davies (a terrific Amanda Seyfried), an actress who also happened to be Hearst’s much younger mistress. A talented comedienne with a thick Brooklyn accent, Davies and Mankiewicz bond on their collective fish-out-of-water experience within this world of riches. The two of them mostly stand by as Hearst wields his illustrious power to effect elections, choose presidential cabinet members, playing the puppet master behind crucial decisions of American society. Those who did not follow his advice felt the full brunt of his media machine, which was substantial enough to consider him untouchable. When Mank’s behavior finally pushes him over the edge – scorned by Hearst, he becomes un-hirable – he chooses his best revenge: making Hearst the center of Welles’ film.

The screenplay is written by Jack Fincher, David Fincher’s father, who passed in 2003. Jack Fincher was a career writer and Mank is a testament to professional scribes. Nobody could deny Mankiewicz’s talent, even if many would scrutinize his methods and practices. His supposed genius seemed born from chaos, a chaos that managed to encircle others around him, including his wife, Sara (Tuppence Middleton), whose commitment to her husband left her with the notorious nickname “Poor Sara”. David Fincher has been trying to make this film since the 90’s, when his father was still alive, but was never able to pull it off. The script and its sentiments for integrity seem to rub against Fincher’s more natural style, which cares little for reputations and always seems to find the evil roots of our very best intentions.

Fincher’s attempts at austerity seem ill-fitting, especially since this is his first film since 2014’s Gone Girl, which was a wonderfully devilish take on personal relationships, perhaps the most cynical film he’s ever made. To follow this with an ode to heroes of the past (even if Mank is more of an anti-hero), seems something like a flip-flop. The last time Fincher has shown this much reverence was The Curious Case of Benjamin Button, which was a box office smash and an Oscar cash cow, but was also his least interesting film by a mile. At times, there is a tension between Jack Fincher’s deferential screenplay and son David’s distrustful insinuations about human nature. These moments are the best in Mank. They add complexity, and they are also comparable to the tension between Welles and Mankiewicz, whose differing opinions on the character of Charles Foster Kane led to cinema’s most seductively enigmatic protagonist.

There is certainly a part of me that wonders how effective Mank could be to an audience unfamiliar with Citizen Kane‘s most principle off-screen drama. By making Mankiewicz the unquestionable center of the story, the film makes a lot of assumptions about what the audience knows about Hearst and Welles, and their eventual high-profile stand-off. Perhaps by doing so, Mank is trying to prove that we’ve been following the wrong characters all this time. Still so, Fincher mostly manages the balancing act of homaging Classical Hollywood, while also thumbing his nose at its underbelly of extreme right wing propaganda. Even in his visual cues, there are contradictions. Sight and sound are meant to replicate Studio Era, even down to adding fake cigarette burns in the corners of the screen, a choice that seems on one side like a love letter to film projection, while on the other a very Tyler Durden-esque middle finger.

The performances are the strongest part of Mank, led by Oldman whose own wily reputation plays well with the character; but also with Seyfried who perfectly embodies the devil-may-care attitude an actress had to have to survive the 1930’s Hollywood. Arliss Howard’s Mayer is a tremendous testament to the Too Big To Fail attitude of the Studio Era, while Tom Pelphrey brings a softer touch as Joseph L. Mankiewicz, Mank’s younger brother on the cusp of becoming his own version of a Hollywood titan. Mank is filled with Welles-ian low-angle shots, and despite Fincher’s might, there is a healthy respect for Kane sub-textually strewn throughout the film. But Fincher and cinematographer Erik Messerschmidt fall well short of replicating Gregg Toland’s mastery of deep focus on Kane, perhaps a sobering reminder of the limits of digital filmmaking. But saying a film isn’t as well-made as Citizen Kane is not exactly the most scathing criticism.