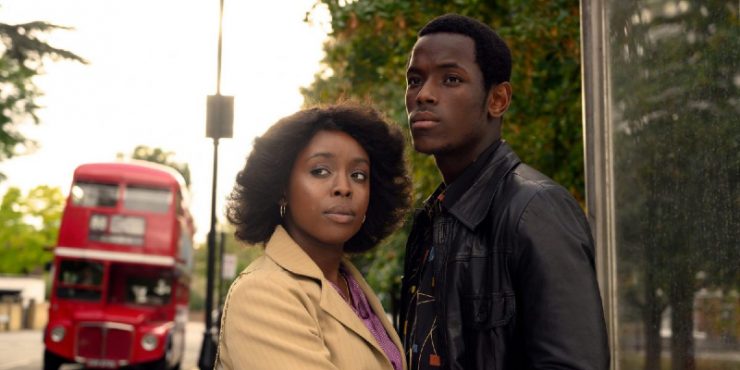 If the first installment in Steve McQueen’s Small Axe series (Mangrove) was a tense procedural, the second is a loose dance party. Literally. A collection of people, ranging from teenager to young adult, meet in a small home in 1980s West London for a house blues party. There’s music, there’s dancing, there’s a DJ who MCs the entire night. The film is sparsely plotted, less interested in innate drama, and more focused on the spiritual experience. For a single night, these young West Indian Londoners can enjoy themselves apart from the ruthlessness of the outside world. Though it’s hardly the reason, their party is an act of defiance, a statement against a city that has deemed their culture unseemly.

Lovers Rock is a companion piece to Franco Rosso’s 1980 film Babylon, which also took place within the racial tensions between Rastafarian Reggae culture and England’s conservative white community. Babylon was a much grittier film, much more aggressive in its presentation of racism and its effect on the area’s Caribbean population (it’s release was delayed – in some countries for decades – because of fear that it might incite racial rioting). Lovers Rock only has sparing moments of resentful whites, popping up occasionally as a reminder of what our characters are trying to forget. Both films are tied explicitly to their music, which becomes a form of resistance against those who wish to crush their culture. Living in tension every day, these characters embracing a music that not only embodies their heritage but also their struggle is quite moving indeed.

There are some characters in Lovers Rock. There’s Martha (Amarah-Jae St. Aubyn) and Franklyn (Michael Ward), who meet at the house party and quickly become inseparable. There’s Patty (Shaniqua Okwok), Martha’s friend who is not happy when Martha runs off with Franklyn and leaves her with the much more uncouth Reggie (Francis Lovehall). There’s Cynthia (Ellis George), whose birthday is the catalyst for the party, and Bammy (Daniel Francis-Swaby), an ominous figure whose laser-like focus on seducing one of the party’s women leads to more than one uncomfortable encounter. When these characters speak to one another, words are often misconstrued, tensions flare up. But when they dance, all of these problems seem to fade away.

The house party isn’t complete bliss. Bammy’s insistence nearly turns to violence, and the mood shifts after the arrival of Clifton (Kedar Williams-Stirling), Martha’s troubled cousin who is still deep in mourning over the death of his mother. Even these two men, obviously motivated by inner torment, find ways to approach peace when in the thick of the party’s effervescent atmosphere, music playing either on top or below the film’s action for nearly the entire duration. In the dance scenes, in classic McQueen intimacy, the camera enters into the fray, shoulder-to-shoulder with the participants. Many of these characters don’t say a word, but we learn about them through their movements, their singing and their enthusiasm.

Unlike Mangrove, Lovers Rock makes a concerted effort not only to avoid conventional narrative but to also focus on Black happiness. For an artist whose harsher critics suggest an almost masochistic documentation of suffering, McQueen’s work on Lovers Rock feels almost radical. It’s a peek at how much joy there can be when white eyes are not there to survey. It’s not a paradise – there are still the same resentments and perils like any human relationship or gathering – but it is remarkably unblemished by the presence of an other. The tradition of “lovers rock” is one steeped in the Reggae community in London, one that stands on its own two feet without support, and McQueen proves that it can support its own feature film as well.