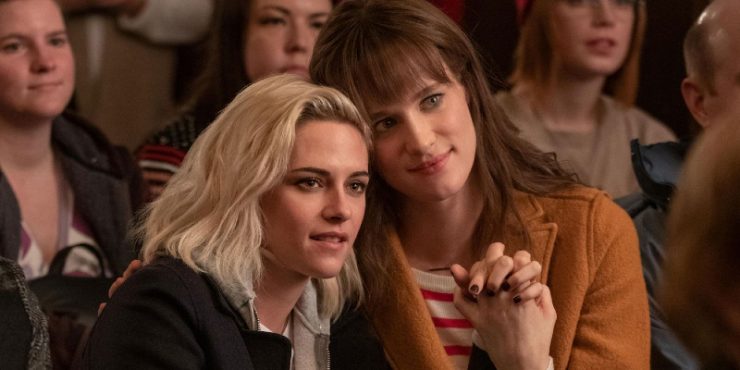 Harper’s girlfriend, Abby (played by Kristen Stewart), is not a Christmas person, but she’s willing to deck the halls and be merry if that’s what Harper wants. The film’s script (written by director Clea Duvall and actress Mary Holland) makes use of the common connections between Christmas and family: Harper loves Christmas because she’s close with her parents, Abby doesn’t because her parents are dead (ack!). But Harper wants to rebuild Abby’s faith in the “happiest season”, and so she impulsively invites her to spend the holiday with the Caldwell family in a small town outside Pittsburgh. Abby agrees and even allows herself to be excited about the prospect of a full-throated, expanded Christmas celebration. That is, until she learns that Harper has yet to come out as a lesbian to her parents. Furthermore, to really put them off the scent, Abby is going to have to pretend to be straight as well.

There is inherent comedy in personal secrets and self-doubt, as the cup runneth over with dramatic irony, but Happiest Season only plays these notes half the time. The other half is filled with anguish over Harper’s closeted-ness. We feel this through Abby, whose half-committed participation in the scheme belies her own insecurities with what she thought was a fundamentally solid relationship. Abby’s plan was to propose on Christmas morning, but now that has to be scrapped. Harper’s secrecy makes a tad more sense when we finally meet her family, a collection of nebulously conservative personalities, led by her father, Ted (Victor Garber), whose current run for public office makes him particularly sensitive to familial scandal. Not to mention her mother, Tipper (Mary Steenburgen, in full Steenburgien glory) whose own brand of delusion comes out in an incessant need for cosmetic perfection, curating Ted’s social media presence to broadcast the All-American family.

Happiest Season‘s decision to be noncommittal on the exact nature of the family’s politics is perhaps the film’s only dash of subtlety. Otherwise, there is a heavy-handedness, both in theme and humor. (When Stewart’s Abby unwittingly finds herself trapped in a storage closet, it’s hard not to groan.) DuVall wants to have it both ways. She wants to portray the inner turmoil of being forced to suppress your true self, and she also wants to create a broad Christmas comedy. I actually think (as much as a straight, cisgender man can) that she succeeds in making the former, but occasionally short changes her story by trying to force-feed it into the latter. There is perhaps nothing more Christmas-y than a family collectively refusing to accept the truth about their lives, but that story requires complexity, which DuVall opts not to display.

Kristen Stewart has become one of the better actresses of her time, a singular talent who has legitimately pulled off being emotionally effective while also seeming perpetually detached. One watches her best work (Personal Shopper, Clouds of Sils Maria), and imagines the fierceness of Anna Karina or Monica Vitti. Her stardom is based heavily on her enigmatic qualities and this film betrays her by revealing her lack of comic timing. This is only magnified with comedically gifted co-stars like Dan Levy (the witty, gay best friend), Alison Brie (Harper’s over-competitive older sister), Mary Holland (Harper’s loopy middle sister, getting the movies most consistent laughs), and Aubrey Plaza, who even in the straight role as Harper’s pastime high school girlfriend, flashes more alacrity with the film’s sense of humor. All of these supporting characters are playing parts in a comedy, but Stewart and Davis are not. The contrast there gets exasperated as you begin to realize that you know almost nothing about them, or their relationship, and wonder why the focus is on them to begin with.

The film’s tension does create legitimate anxiety, but more so in the meet-the-parents variety, as Abby contends with a rather unpleasant family. The general thoughtlessness and uncaring of the Caldwells – even Harper, herself – seems like a much bigger red flag than being closeted. And the script’s attempt to stack the deck, by making their intolerance the result of political ambition, feels incredibly hollow, especially when – I guess this is a SPOILER ALERT – everything and everyone ends up totally fine by the end. Minds are changed and personalities shift in an effort to bring everyone together for Christmas. It’s a happy ending, but one that hardly lines up with the previous hour and a half – it’s a happy ending for those who need happy endings no matter the cost. It’s a happy ending for Christmas people, because no matter the thematic complications, Christmas always wins in the end.