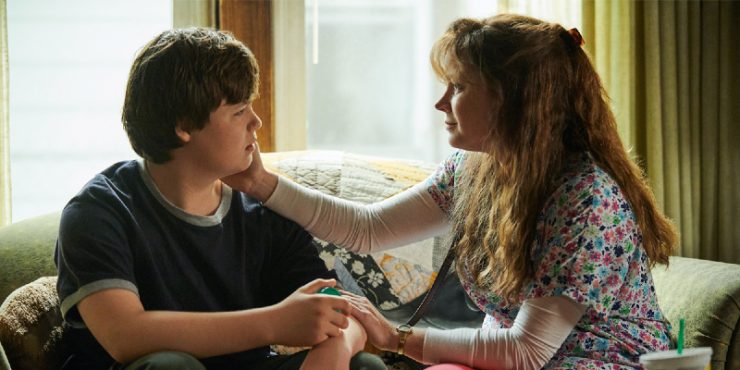 J.D. Vance’s memoir Hillbilly Elegy kicked off a literary trend in 2016 of nonfiction books meant to reconcile the plight of lower class whites in America. These books were liberal olive branches to poor white communities, ravaged by global capitalism and a devastating opioid pandemic. Coinciding with Trump’s presidential campaign and eventual election victory, they were also liberal attempts at understanding the political migration of rural white communities toward a conservative political machine that has convinced them of their own victimhood. Throughout the Trump administration, Vance and other liberal institutions have done their best to make amends with a community that has succumbed to social and economic despair, as well as dangerous political indoctrination.

It’s all to say that Vance’s memoir was probably a more novel idea in 2016, before four years of Trump, and before the market was saturated with stories coming to terms with the Fall of White People. The film adaptation, directed by Ron Howard, and coming weeks after the US voted to avail themselves of Trumpism, feels ill-timed. This is an issue that is totally separate from the fact that the film is simply not good, a failure on all levels and not even able to find entertainment in its own messiness. Even if it weren’t, there is a bit of a cursed aspect to this movie that’s hard to ignore. Even on the best terms, how could one expect to choke down yet another tale of redeemed white delinquency? What is the liberal obsession with mending fences with those who have no interest in meeting you halfway?

Alas, because the film is so bad, we don’t really have to have larger conversations about why these stories have become so tired, or why we bend over backwards to find meaning in the undoing of working class white neighborhoods. Vance is the film’s main character, played by Gabriel Basso as a Yale law student in his twenties, and by Owen Asztalos when the film flashes back to J.D.’s troubled childhood. His young life has often been thrown into turmoil by the antics of his mother, Beverly (Amy Adams), an addict whose violent mood swings suggest unaddressed trauma. As a child, J.D.’s relationship with Beverly was riddled with constant fluctuations between intimate affection and raging fury. Despite support from his responsible older sister Lindsay (Haley Bennett) and Beverly’s no-nonsense mother, Mamaw (Glenn Close), growing up with Beverly has left emotional scars.

Ast Yale, J.D. finds himself lost amongst his peers, who are more familiar with the upper class lifestyles that most of the law community exists in. Overwhelmed by salad forks and internship interviews, he finds himself drawn back into Beverly’s chaotic world when she overdoses on heroin and he returns to Appalachia to care for her. Trying to balance caring for his mother while not wanting to encourage her self-destruction, J.D. tries to come to terms with his own responsibilities and the troubles of his family. The film frequently cross cuts between J.D.’s childhood and his adult return home, coloring his present-day decisions with shades of context from his past. Far from unique as a screenplay structure, Hillbilly Elegy establishes itself as a shiftless film which tries to workshop its way out of an uninteresting story.

Ron Howard is the epitome of a professional Hollywood director. His broad appeal can be a demerit to many a cinephile, but his competence as a director is easy to take for granted. This is one of his worst movies, one that encompasses all of the criticisms of tepidness that have been levied against him. He and producing partner Brian Grazer enjoy making adult dramas that focus on overcoming struggle. Feel-good is meant to be part of the package, but you still need to have objective thought. Howard’s specialty is maximizing sentimentality without cheapening the end result. Hillbilly Elegy is wall-to-wall hysteria, turning the distress of the white working class into a spectator sport. The Vance family become the subject of a detailed anthropological study, but the study breeds no conclusions, just sequences meant to make poverty seem culturally exotic.

Even Adams and Close – two brilliant, glamorous actresses who are both blowtorched by the hair and wardrobe team to effectively play “poor” – feel lost among the weeds. They are both masters at emotional complexity, but Hillbilly Elegy‘s script (by Vanessa Taylor), strips the characters of any kind of complexity, giving them little to play outside of extreme melodrama. The performances are bad, but they feel more a failure of directing and writing than they do of acting. Even Basso and Asztalos, playing both sides of J.D. Vance, is put in difficult positions to really succeed. J.D.’s complete superiority over every other character isn’t quite the shortcut to heroism that Taylor thinks it is. It’s obvious that the filmmakers are out of touch with their characters and the subject matter at large, but the level of obtuseness here is cringe-y. Perhaps this is the story that the book intended (I have not read it), but I can’t imagine that even Vance would call this anything like authentic.

I won’t touch my own personal feelings about Vance’s hypotheses about personal responsibility and the role it plays in poverty and “community rot”. Instead, I’ll comment on Howard and Taylor’s inability to even consider a real commitment to understanding their characters. The problem with pandering toward a demographic is that you can easily condescend, and they barrel over that line quite liberally. I’m not sure who the audience will be for Hillbilly Elegy. As I said before, even the good version of this film would have found itself boxed out by a contemporary news cycle that has become fatigued by white trash recognition. So maybe it’s merciful that this film finds itself slipping out during the height of a pandemic that spares it the scrutiny of a serious theatrical run. The worst thing that could happen to Hillbilly Elegy is that a lot of people actually see it.