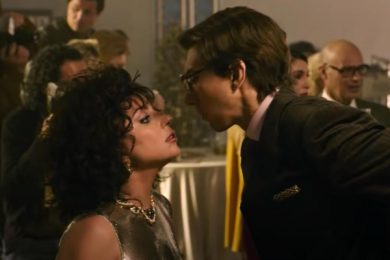 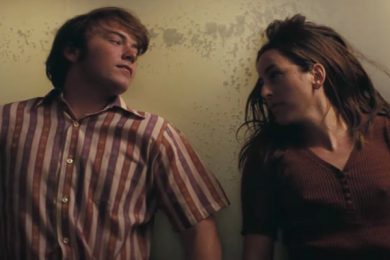 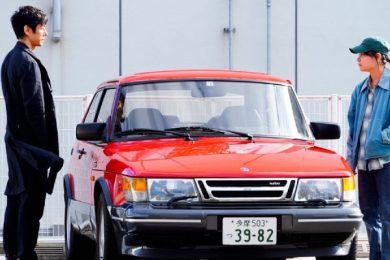 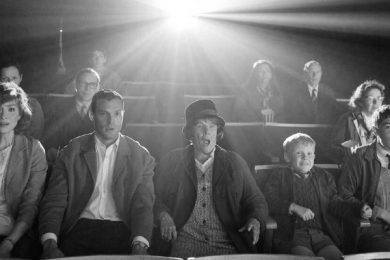 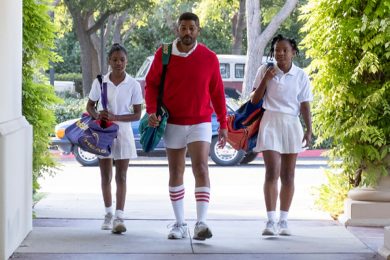 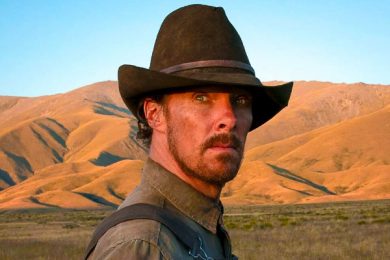 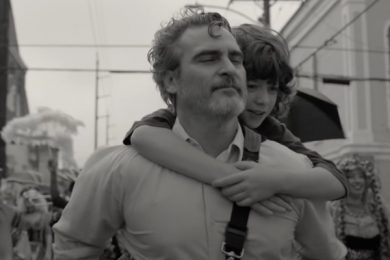 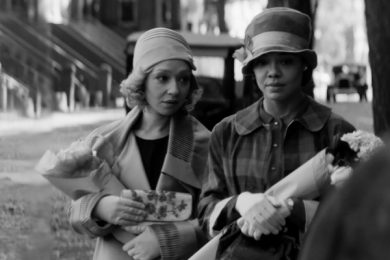 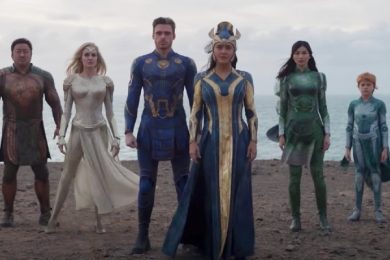 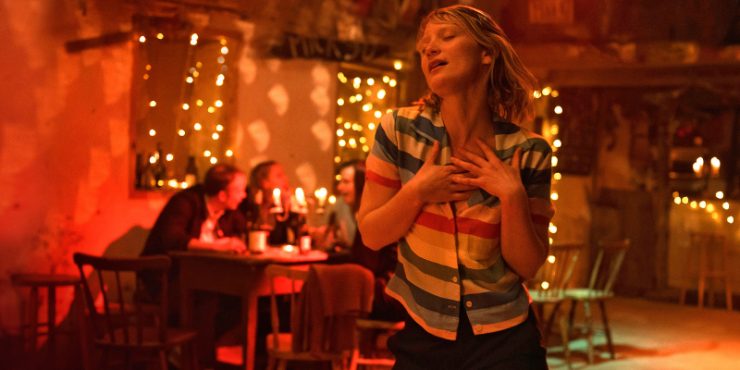 Not sure there is any region of the world more defined by a single filmmaker than Scandinavia is by Ingmar Bergman. The legendary and prolific director made over sixty films in a sixty-one year period, with a handful of them ranked amongst the greatest ever made. The Swede’s stories were cruel and existential, brutal examinations of the human condition with nihilistic interpretations of the behavior of man. The Swedish island of Fårö was his home for many years and also the location for a lot of his films (Persona, Through a Glass Darkly, to name a couple). After the death of his fifth wife, Ingrid, it is said that he rethought his notoriously atheist beliefs and felt her spirit with him in his home. Fårö itself is haunted by the ghost of Bergman, and it’s this presence that brings many from around the world to visit the island, hoping to gather inspiration from the director himself.

Bergman means a lot to Tony (Tim Roth) and his partner Chris (Vicky Krieps), two film directors who live in America but whose accents give away European origins. Their trip to Fårö is meant for work – both of them are beginning new scripts – but there are also enticing sightseeing opportunities. Tony is a renowned filmmaker in his own right, and even in faraway pockets of Sweden he can get invited to screen one of his films and give a talk to an adoring audience. This division of success between Tony and Chris is just one of the things that creates friction in their relationship. For Tony, everything comes easy; writing, directing, even watching films. He worships Bergman, where Chris has her qualms. As a woman, she can’t get past Bergman’s shortcomings as a husband, the sacrifice his many wives had to make with his nine children. For Tony, that’s the price of genius.

Writer-director Mia Hanson-Løve perhaps shares Chris’ skepticism over the Bergman idolatry. Bergman Island vacillates between confirming his god-like status and rolling its eyes at all the sycophants. The director’s reputation moves him past human expectations, and so Hanson-Løve uses him as a symbol for artistic perfection and all the human imperfections that stem from it. Hanson-Løve, a modest and tasteful storyteller with a talent for dissecting human relationships gives us her most personal film here, a story that bridges the gap between life and art while attempting to define the line that stands between them. Like Bergman, things begin to blend and the difference between what’s real and what’s not becomes a bit hazy. Unlike Bergman, humanity is proven to be resilient, vulnerable to heartbreak and failure but strong enough to overcome it.

Two-thirds into Bergman Island, Chris decides to tell Tony about the story she is working on. The film itself begins to play in front of us, with Mia Wasikowska as Amy and Anders Danielsen Lie as Joseph. As Chris narrates, we learn that the two have a romantic past that has never materialized into anything substantial because of missed timing and bad luck. They spend three days at a wedding in Fårö, where their affair begins again. The situation is fraught; she is raising a young daughter with another man and he has a girlfriend that he is committed to. Passion prevails but truths come out and (like Bergman!) feelings are not spared. This film-within-a-film is about desperation, as Amy lusts shamelessly for Joseph who’s too weak to say no, but too principled to give her any confirmation of love. Chris has the whole story except the end, but Tony has little advice to give. He can’t fathom Chris’ writer’s block, but he also seems uninterested in her apparent love story that leads to nowhere.

Compared to Chris’ vulnerability, Tony seems like a granite stone of obstinance. He’s affectionate and caring but seems unable (or unwilling) to meet her at the depths of her isolation. Is it indifference or is it deliberate ignorance of the fact that Chris’ passions often lead her to men that aren’t him? Early in their trip she stands him up for a bus tour called ‘Bergman Safari’. She instead spends the afternoon with a young film student named Hampus (Hampus Nordenson) who gives her his own tour of Fårö where they share a bottle of cider and an intimate visit to the beach. Tony is content with Chris, willing to accept her casual flings, but less willing to hear it recounted under the rouse of fiction. But Chris herself is still conflicted, grasping for Tony’s attention and input, maybe even courting his scorn.

After screening Cries and Whispers (one of Bergman’s more harrowing emotional hellscapes), she tells Tony that she hopes Bergman is happier in life than his films suggest, but perhaps it’s her own dissatisfaction she is weary of. Tony is loving, but it’s clear he would be fine without her. After all, where do they stand? They have a child together but remain unmarried; both haunted by yet another ghost – abandonment. Chris’ own success as a filmmaker (Hampus likes her movies), doesn’t provide her with the same feeling of self-sustenance that Tony has, and she can’t figure out why. Is it just because she’s a woman? Bergman Island is filled with these questions, exploring the dynamics of love and gender through the prism of cinema. Bergman’s films were always meant to illuminate the bleak realities of human existence that we desperately keep hidden away. Hanson-Løve uses the same devices, but in lieu of religious meaning and existentialism, Bergman Island instead takes apart the foundations of desire and happiness. As the film (and the film-within-the-film) unfolds, Chris’ own complicated relationship with storytelling becomes more apparent, and Tony’s stubborn pragmatism is shown in a whole new light.

Vicky Krieps, so unbelievably good in Paul Thomas Anderson’s Phantom Thread, once again plays a woman entangled with an esteemed older man. In Bergman Island, Krieps lies perfectly in that middle ground between insecure infatuation and stubborn refusal of subjugation. It is a further confirmation of her remarkable talent. As her younger facsimile, Wasikowska is stunning, crafting a fully realized story of heartbreak and longing within the film’s metafictional narrative. Tim Roth, ever the veteran, hits Tony’s notes perfectly, often generous with others in terms of screen presence, but always radiating the power of an influential artist. As Joseph (and later, as a version of himself) Danielsen Lie continues to prove his ability to play sensitive, emotionally complex men. Between this and the to-be-released The Worst Person in the World (another must-watch about the ways art can heal and the ways it can harm), Danielsen Lie proves to be the indie heartthrob of 2021.

There’s yet another piece of context: Hanson-Løve herself is a director who has had a child with an internationally-beloved filmmaker, Olivier Assayas, and this small piece of biography adds yet another intertextual element that enriches Bergman Island‘s own sense of art imitating life, and the spiraling nature that comes with telling your own story. 2021 has been filled with spectacular films about the therapeutic power of creating art (Drive My Car, The Souvenir Part II, to name two more), and Bergman Island is perhaps the very best. Art can also reveal, which is the key to Bergman; revealing infidelity, betrayal, and most importantly God’s silence. Hanson-Løve agrees but her methods are much kinder, her thoughts on humanity less severe. Bergman Island tips its hat to the Swedish legend, but also takes the time to make clear: he didn’t know everything.

Written and Directed by Mia Hanson-Løve