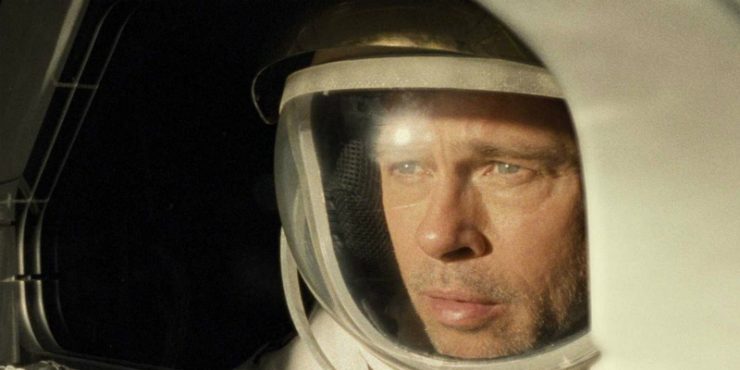 Ad Astra is a perfect illustration of the paradox of Brad Pitt. He’s a born movie star who wishes desperately to be a serious character actor. He prefers idiosyncratic characters, to show off a range that I’ve never been totally convinced he has. He is at his best, usually, in more conceptual roles that play off his screen persona. If you want a note-perfect example, watch his brilliance in Once Upon a Time… in Hollywood just two months ago. A film like Ad Astra requires an emotional depth that Pitt has always struggled to produce (he came close with Moneyball). As Pitt wanders through the terrifying silence of our universe, one may wonder what makes him so special that we’re forced to follow him.

The film is the latest from James Gray, a magisterial film director with a flair for opulence, who turns his eyes now to the stars. More times than not, his movies are much more complex cinematically than they are narratively. His previous film, The Lost City of Z, was perhaps his best, one that encapsulated the grandness of his ideas and his vision. Ad Astra is another astonishing visual creation, a movie that posits the terror of the future without neglecting the tensions of the present. The near future of its setting has the people of Earth precariously searching the outer limits of space in an attempt to find intelligent life willing to rescue them from their dying planet. This doesn’t exactly sound like a huge stretch from where we are now.

Pitt is Roy McBride, an accomplished astronaut tasked by the US Space Command (SpaceCom) for a mission that will take him to the outer limits of the universe. He’s meant to find the source of mysterious power surges coming from Neptune that are wrecking havoc on Earth (and nearly killed Roy in the film’s tense opening scene). SpaceCom veteran Colonel Pruitt (Donald Sutherland) explains to him that they believe the surges are coming from a ship associated with the Lima Project, an ambitious program led by Roy’s legendary father, Clifford (Tommy Lee Jones). The Lima Project was meant to find intelligent life, but was thought to have gone missing or been destroyed. In a single moment, Pruitt explains not only is Roy’s father still alive, but now Roy must find him and stop the surges.

Roy’s mission is classified (SpaceCom is not interested in revealing that their beloved Lima Project has turned into a death machine), and his journey is complicated by things as varied as bureaucratic strong holds, ineffectual spaceship captains, violent research primates and – you heard right – moon pirates. As Roy’s mission becomes more and more fraught, Ad Astra‘s plot morphs into an interplanetary Heart of Darkness. As he gets further from Earth, the meaning of his destination becomes more and more obscured, and the substance of what he’ll find there feels more and more dangerous. By the end, Roy’s persistence stems from trying to reconnect with an absentee father, whose non-presence has ruptured his emotional life.

At its best, Gray’s latest is a sobering meditation on isolation, the inherent loneliness that becomes part of the human condition, and the paralyzing anxiety that comes with imagining the mortality of the human race. With wondrous cinematography (from Hoyte von Hoytema), Gray transforms the beauty of endless space into a suffocating cell. Within the ships and stations, the striking set design (from production designer Kevin Thompson) is both flush with color, and also terse and hostile. Every space, both open and closed, plays its part toward alienating Roy. Cutting him off not only from the rest of the film’s characters, but seemingly from the rest of human existence.

That is all theoretical, though, and within the film’s script, the characterization is surprisingly thin. As I mentioned before, Pitt simply isn’t an actor that could give more to Roy McBride than what he has on the page of the script, and all he has there is daddy issues and a divorce (Liv Tyler plays the voiceless wife in a few flashbacks) that is apparently caused by said daddy issues. Ruth Negga appears briefly as a SpaceCom director on Mars who has lots of beef with Clifford McBride and the hypocrisy of the whole operation, but that too leads to little more than furthering Roy’s treacherous journey, and only highlights the shallowness of what Ad Astra wants to achieve with its characters.

The specialness of a James Gray film cannot be understated. This is certainly his most ambitious project, and part of the excitement of watching his films is that his scope only appears to get bigger. The ideas within Ad Astra are certainly noble, and I appreciate Gray’s attempts to make a film about space that tackles minute human themes, but the canvas is both too small and too big in equal measure. Gray and Pitt are too often at cross hairs with the director trying to overplay emotional developments (the lush Max Richter score is heavy on the audience cues), while Pitt takes the more somber approach. At times this feels like a minor character study in an astonishing epic’s clothing, and it’s worth watching for the time the balance is struck correctly.