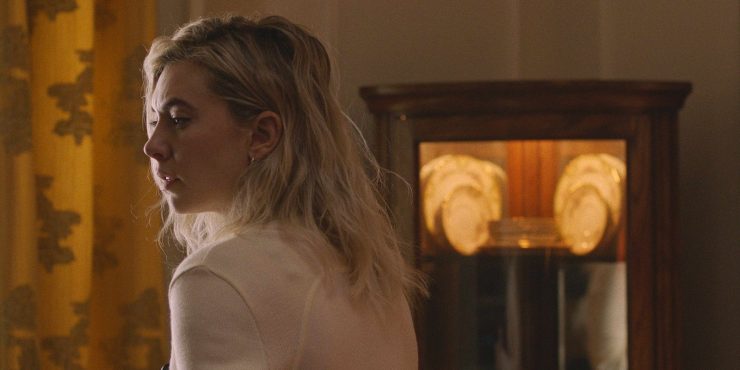 Pieces of a Woman exists in the spaces between grief and explanation, examining the vacuum created by the arbitrary nature of tragedy. How does someone manage to simply exist in these spaces? Where all seems lost and paths to recovery seem impossible to grasp? Woman os about the loss of a child, and its first half-hour is consumed mostly with a single take inside a Boston townhome, where a planned home birth goes horribly wrong. The mother is Martha Weiss (a brilliant Vanessa Kirby), and her commitment to the home birth is not examined extensively, though the decision in itself explains a lot about her: she does not want her or her child’s life dictated by societal intervention. It’s a decision that requires great faith in those you’re most intimate with. When it goes wrong, it’s hard to know where or how to reroute that faith.

This is the first English-language film from Hungarian director Kornél Mundruczó. The script is written by Mundruczó’s partner, Kata Wéber, and is based on their own harrowing experience with childbirth. His 2013 film White God managed to make a movie star out of a dog (perhaps no better a reminder that directing and editing is critical in the shaping of performance) by reflecting pathos and triumph in the expressions of a mutt named Hagen. In Pieces of a Woman, Mundruczó is back to working with a cast of humans, but his practice of projecting their inner torment through subjective camera composition stays the same. His formalism is austere and deliberate, and the camera is often focusing on the exact things the characters would prefer to avoid, highlighting their senses of grief and self-denial.

Martha’s partner is Sean (Shia LeBeouf), a boorish former addict who works in construction. His rough, blue-collar style clashes against Martha’s blonde glamor (she’s some kind of executive, in one of those upscale buildings with lots of glass), but their relationship seems to work, despite the objections of her mother, Elizabeth (Ellen Burstyn). Sean and Elizabeth are in frequent loggerheads, but they put it aside to support Martha in her pregnancy. When her water breaks, things become complicated when her midwife is unable to make it and is forced to send Eva (Molly Parker), a replacement at the last moment. Sean and Martha have faith in Eva despite the unfamiliarity, but complications arise and before the baby is even born, Eva requests an ambulance. Their worst case scenario becomes fully realized. I’ll refrain from saying more other than the striking, visceral nature of this sequence is unlike anything I’ve ever seen.

In the aftermath, Martha fails in several attempts to rebuild her life. Beyond her, Sean’s sobriety teeters under the weight of the anguish and Elizabeth is eager to push for a civil case against Eva. Eva herself has become a media villain, the monstrous star of a local scandal; a baby killer. Martha becomes detached from it all, avoiding family and friends, and turning inward. “Penny for your thoughts?” Sean often asks her, and her responses are often underwhelming. The state prosecutor against Eva is Suzanne (Sarah Snook), who also happens to be Martha’s cousin. Suzanne agrees with Elizabeth, and even pushes the possibility of a lucrative payoff in court. As everyone around her searches for tangible ways to undo their grief, Martha is focused on simply trying to stay upright.

The film’s overwrought tone and dreary Massachusetts setting may remind some of Kenneth Lonergan’s ultimate feel-bad family drama Manchester By The Sea. Like Lonergan, Mundruczó’s film is a strategically plotted melodrama disguised as a shiftless, character-led narrative. Wéber’s script gives us an ensemble tinged with vicious backstories and unspoken resentments finally coming to the surface, spiraling around a protagonist consumed by her own psychological crisis. Manchester was about the albatross of Catholic guilt that saddles most aimless Northeastern men, but the city of Boston is much less of a character in Pieces of a Woman. The tragedy here is more random, less connected to the personality of its heroine. But both films place their main character in a crucible of personal pain, frankly displaying that there is nothing that can be done to help them escape.

Kirby’s performance, the unquestioned center of this story, is the key to everything that works. The melodrama succeeds mostly because Kirby seldom participates in any of it. It’s LeBeouf and Burstyn who are most histrionic and work well within it (I don’t think I’ll be the only one uncomfortable with how closely the details of Sean’s volatility matched up with accusations of abuse against LeBeouf by former girlfriend, FKA Twigs), while Kirby’s rages all scream from the inside until the inevitable overflow. Martha’s sense of her own grief, her almost curiosity at the tempest of emotions she’s experiencing, locks her within, creating a swell of worry in those around her. In her near-comatose state, people try to decide what is the best plan of action, and she resents every single one of them for it.

Pieces of a Woman is more traditionally structured than it might appear. Even Howard Shore’s wondrous score swells with Sirk-ian emotional cues. The use of long takes (cinematographer: Benjamin Loeb, editor: Dávid Jancsó) in the film’s more emotionally-charged moments allows the actors to really consume the pain of their characters. They all get their showcases, their monologues, their blow-ups. The exception is Molly Parker whose Eva is vilified for reasons out of her control. The film mostly watches without comment as she silently takes the blame for the harrowing event – it’s a brilliant little performance in a film filled with giant ones. Mundruczó is harkening back to a former Hollywood staple, the Melodrama, albeit presenting it in much harsher terms. Like those classic films, human pain is filtered through cinematic concepts (penetrating camera, string-heavy music), and brought to our consciousness.