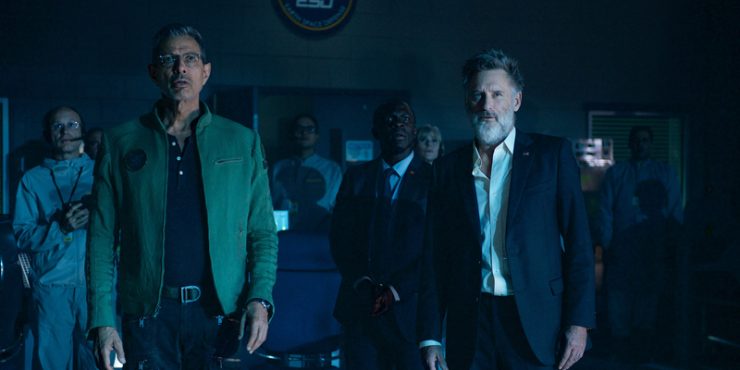 Roland Emmerich has destroyed the world on so many occasions, and in such a wide scope of ways, that it’s hard to remember just how groundbreaking his 1996 film Independence Day really was. Hollywood had been pumping out disaster films for decades, but it was Roland Emmerich who taught us just what a true Hollywood disaster was. No landmark too sacred, no skyscraper too high; Independence Day took actual aim and blew it all to smithereens. Twenty years later, we’re getting a sequel we never needed. The very concept of continuing these storylines runs against the spirit of the original film, which made it quite clear that there was no real way that humans could handle the threat of the alien invaders on their own.Independence Day took on that scrappy American enthusiasm of the mid-90’s and spun it into an international mantra of us against them, and had the gaul to think that humans would defeat these incredibly advanced beings with their cunning. Its all completely preposterous, and the film probably balances that line between stupidity and sincerity better than any large-scale action movie ever made.Resurgence, the bloated sequel we’ve been saddled with, has all the stupidity and none of the sincerity, nearly all of the preposterousness and none of the charisma. One thing the script to the first Independence Day knew was that characters had to be strong. Nearly all the major characters from the first film have returned, all twenty years older, all seeming to do karaoke versions of the people they’d once played. AndResurgence supplies us with a crop of new, younger characters, all of which are resolutely terrible, unable to even cobble a glimpse of the charm of Will Smith (who’s noticeably absent this time around) or Jeff Goldblum or Bill Pullman, let alone match it. What we’re left with is a mess of a film, that takes its audience’s intelligence for a sack of beans when characters use phrases like “fusion drive” and “moon milk”. And yet, is it still possible that I had fun?

Resurgence‘s concept of time is so incredibly lacking in basic logic, that the thing that makes the most sense if that the film takes place in 2016. In the twenty years since the alien attack, Earth has achieved remarkable international peace (worldwide destruction somehow actually brought the people together), and they used the leftover alien ships, harvested the technology and rebuild the planet. Travel is a breeze, even getting to the moon seems to take less than an hour in the right kind of ship, and on the twentieth anniversary of their victory, President Lanford (Sela Ward) is leading America through a time of great morale and flourish. The only person who seems to be having a tough time is former President Thomas Whitmore (Pullman), who is still suffering from vivid nightmares of the creatures who tried to destroy Earth during his presidency. Whitmore is thickly bearded, walking with a cane that doesn’t seem to serve any specific purpose. He’s been reduced to a cook who must not leave his hotel room, screaming about the return of aliens. His daughter, Patricia (Maika Monroe), is the press secretary for President Lanford, though she seems to spend more time doing damage control for her troubled father. Patricia’s fiance, Jake Morrison (Liam Hemsworth), is a skilled fighter pilot with a penchant for taking dicey risks in the air, the latest of which nearly got his best friend, Dylan (Jessie Usher), killed. So while Dylan gets to meet the president and run an air show for the Fourth of July, Jake is stuck doing a tour on the moon, hanging out with the an awkward brainiac named Charlie (Travis Tope), who has the IQ of Einstein but the hormones of a fourteen-year-old. Because the plot wasn’t already convenient enough, Dylan is also the adopted son of Steven Hiller – AKA Will Smith’s character in the ’96 film. Resurgence‘s script (which has FIVE credited writers on it), spares us a forced love triangle between Patricia, Jake and Dylan, but that’s about the only disaster it does avoid.

David Levinson (Jeff Goldblum), the environmentalist cable repairman-turned-Earth-saver from the first film works on research at Area 51, and is a valuable, powerful political advisor to the president, particularly when dealing with future extraterrestrial encounters. He travels to an African village in which a warlord named Dikembe Umbutu (DeObia Oparei) tells him the details of the ground war his people fought with the aliens for nearly a decade. Also in the village is a medical scientist named Catherine Marceaux (Charlotte Gainsbourg), researching symbols that many victims of the attacks seem to be drawn to. When a ship that has spent the last twenty years sitting over the village suddenly begins functioning, David is worried that his worst fears may finally be coming true: they’re coming back. At Area 51, the captured aliens have awoken from a coma, springing to life with great fervor. The same happens to Dr. Brakish Okun (Brent Spiner), last seen pressed against a window with an alien tentacle wrapped around his neck in the ’96 Independence Day, Okun has spent the the last twenty years in a coma, awakening to find just how advanced the world has become in his absence. He’s awake just in time for the second wave of attacks. As America and the world learns of their return, the aliens come in a ship so big that it knocks out the Earth’s satellites and creates a gravitational pull so disruptive it lays complete waste to both Hong Kong and London in one fell swoop. The speed and severity of the attack leaves the world sobered and helpless, but quickly the great minds of David and Okun huddle together to create a plan, while Dylan and Jake bury their differences in an attempt to fight back the aliens in the air. All while Patricia must cope with both the dangerous situation Jake finds himself in with the mental deterioration of her father. Let’s just say she doesn’t get to do a whole lot of press secretary-ing done.

In many ways, the differences between Independence Day and Independence Day: Resurgence says a whole lot about how blockbusters were made in the 90’s versus how they’re made now. The influx of pandering toward international crowds is obvious with the casting of African and East Asian characters. The ’96 film was a star-spangled circle jerk that had the balls to take an exclusively American holiday and impose it on the whole world. Not that I’m against diverse casting, especially if it runs against the traditions of past films, but what good is done really by having Chinese model Angelababy (yes, that’s the actual name she’s credited with) play a celebrated fighter pilot who only has five lines and whose sole purpose is to be doted on by the nebbish character of Travis? Or set Deobia Oparei’s character up to be a resource to fight against the aliens, only to turn him into a foil for the completely unnecessary character named Floyd? (Very quickly: Nicolas Writght plays an accountant named Floyd who, for some reason, joins David and Catherine on their trip from Africa to Area 51. The Jon Oliver look-a-like plays the kind of hair-brained comic-relief character that can begin and end a career in one instant. He’s this movie’s Jar-Jar Binks.) These casting decisions are further proof to the film’s commitment not only to thoughtlessness, but to being offended by the very idea of thought. The original film had at least elementary ideas about computer viruses, and seemed to at least know how the presidential chain of command worked. This film was obviously written without even the courtesy of a simple Wikipedia search. SPOILER ALERT: The film even ends on a suggestion of a sequel, which we know every commercial film must provide. ConsideringResurgence‘s underwhelming box office performance, it’s a sequel I’m not sure we’re going to see. /end spoiler

Not having Smith return is a big hit to Resurgence, especially at a time when Bill Pullman seems to actually be in a coma during this performance, and Jeff Goldblum seems to be only interested in performing self-parody at this point (watch his cameo in the second season of The Unbreakable Kimmy Schmidt to see how this can be done perfectly). But this movie is obviously a commercial for the trio of Hemsworth, Monroe and Usher, the three youngsters and former BFFs who must find away to rebuild their trusting bond for the good of the planet. Maika Monroe has It Follows fame, but seems absolutely lost here in this mega-blockbuster. Performing in a movie like Independence Day requires a certain amount of shamelessness, a lack of vanity to have yourself look ridiculous. In trying to keep her dignity, it’s Monroe that looks the most ridiculous, and it doesn’t help that her performance is wooden and unresponsive. **Mae Whitman, the original Patricia Whitmore is still a working, talented actress, but maybe Resurgence filmmakers don’t find her to be a realistic enough fiance for Hemswortht? Barf.** Hemsworth at the very least understands the shamelessness, but younger Thor seems in a mode of super-overcompensation. Watching him was like watching Anne Hathaway try to host the Oscars with James Franco in 2011, he’s working but he’s also embarrassing himself. As for Jessie Usher, there’s not much to say about him except that I remember precious little about the character or the performance. Avoiding that love triangle that I mentioned earlier renders the character of Dylan Hiller utterly useless outside of the fact that he’s meant to be the son of the original film’s most popular character. But a replacement for Will Smith he is not. The humor is absent, the screen presence as well, and the one part of the character that was in any way interesting – his mother, played by Vivaca A. Fox, returns! – takes up the least possible amount of screen time.

There’s a fascinating moment toward the end of the film where Resurgence seems to suggest a queer relationship between Dr. Okun and his dedicated, loving assistant Milton (John Storey), but just like the film’s interest in international characters, the placement feels token and is made worse by the fact that the movie never actually commits to it, or explicitly states the nature of their relationship (though circumstantial evidence makes it obvious). As Okun, Brent Spiner takes a fifteen-minute part from the first film and turns it into Resurgence‘s singular watchable plot line. It’s not that Spiner’s character is any more intelligent than the rest of the film, it’s just that the Star Trek actor is the only one who understood the spirit of the ’96 film and came ready to represent it. The truth is, there was never any reason for Emmerich to return to this story. The first film was in many ways a passion project between him and his creative partner Dean Devlin (they’re the only two credited screenwriters on the ’96 script), while this film is a blatantly obvious capitalistic endeavor. Any fun that I did have during this film comes from a pure nostalgia for my childhood love of the first film, and certainly any laughs I had during this film came at the movie’s expense. Very simply, nobody here seems to be having any fun. Consider this scene in the first film, as Will Smith’s Steve Hiller parachutes down to the desert floor, and begins walking toward the crash-landed alien spacecraft that was attempting to kill him moments earlier, shouting boastful epithets. The energy, spirit and enthusiasm in this sub-two minute scene trumps any moment in Resurgence. There’s no evidence that a Smith return would have made the film any better. Twenty years is a long time, and Smith isn’t exactly the same kind of movie star he once was, we certainly know Goldblum and Pullman have had career shifts. But twenty years also seems long enough to forget that you should never make a sequel to a movie as perfectly placed as Independence Day.