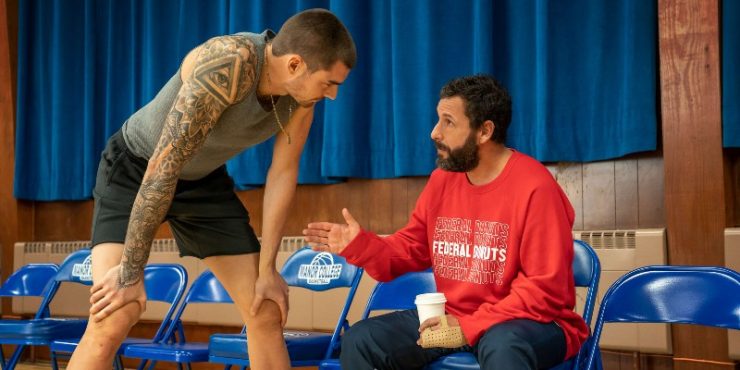 One of Adam Sandler’s many everyman traits that he touts in interviews and various celebrity appearances is that he loves basketball. I, too, love basketball. I also love Adam Sandler movies – well, at least I like the good ones. Good Adam Sandler movies can be a hunt to find, but when talented directors have taken gambles on his acting ability, the results have been surprisingly good. Not surprisingly for a mega-rich superstar, his preference is for the creature comforts of juvenile comedy, usually produced by his production company, Happy Madison, which replicates a formula that can go stale in the wrong film, especially as Sandler has entered his fifties. But then there’s Punch-Drunk Love, The Meyerowitz Stories, and the already iconic Uncut Gems. His latest movie, Hustle, places him in the world of professional basketball, a venn diagram circle meant to appease my interests and another opportunity for Sandler to show his chops.

Hustle is not quite a Good Adam Sandler Movie. It’s earnest as hell and Sandler brings a slouched, baggy-eyed weariness to the role that fits well. He plays Stanley Sugarman, a former college basketball player turned international scout for the Philadelphia 76ers. Stanley’s job is to travel the world in search of the next basketball phenom, eating fast food while writing scouting reports and compiling advanced stats on the world’s brightest young superstars. He reports directly to Sixers owner, Rex Merrick (Robert Duvall), though he does butt heads with Rex’s fiery, opinionated son, Vince (Ben Foster, in peak sleazeball mode). Early in the film, Rex promotes Stanley to assistant coach, the fulfillment of a lifelong dream, but hours later Rex tragically dies, leaving the Sixers, and Stanley’s position within the franchise, in an uneasy position.

Vince initially keeps his father’s promise and Stanley starts the season as an assistant coach, which allows Stanley to finally spend more time at home with his wife, Teresa (Queen Latifah), and their teenaged daughter, Alex (Jordan Hull). But that doesn’t last long. “You’re valuable as an assistant coach,” Vince explains, “You’re indispensable as a scout.” A comment that belies how often Vince neglects Stanley’s advice. So the sage talent scout is shipped off to Spain, only to find out the prospect he’s there to watch has gotten injured. Dejected, he walks past a pick-up game, where he sees a street game progressing with a rambunctious crowd. One player, Bo Cruz (Juancho Hernangomez), stands out. At 6’9” with a massive wingspan, Bo plays in construction boots and is still able to dominate the competition. Stanley is immediately convinced that he’s found the missing piece.

Hustle is produced by LeBron James’ production company, Springhill, which no doubt helps the film get licensing for the actual NBA franchises and also assists in scoring the film’s many cameos by active NBA players. Basketball fans might get a kick out of seeing Khris Middleton and Kyle Lowry in small, basically meaningless roles. As the film is mostly about the 76ers, Matisse Thybulle, Tobias Harris, and Tyrese Maxey feature in a handful of scenes (Sixers megastar Joel Embiid is mentioned but conspicuously absent). Hernangomez himself is a player in the NBA, though this movie may oversell his overall impact on the league. This is the central push-and-pull of Hustle, a movie that aspires to be an honest portrayal of the league. The appearance of real basketball stars lends credibility. It’s also clear early on how little interest the movie has in truly interrogating the more exploitative aspects of athletic scouting, skittish about needling a professional partner.

It’s disingenuous to say Hustle has a conflict of interest in this way because it’s clear from the jump (no pun intended) what kind of movie it’s trying to be. The script, by Taylor Materne and Will Fetters is a formulaic crowd-pleaser through and through. Director Jeremiah Zagar (his second feature after 2018’s We The Animals) gives the film flashes of style, but he mostly falls back on the usual way of filming basketball sequences – heavy editing, crisp foley on the swish of the net, POV shots that make you feel like part of the action. In this instance, Hustle benefits from having actual basketball players, adding a pop to the game scenes where most basketball films rely on heavy editing to hide the lack of ability by the actors. A particular standout is Minnesota Timberwolves star Anthony Edwards, who plays draft favorite Kermit Wilts, whose ego matches a blistering talent.

Edwards’ Wilts is the main antagonist for Bo Cruz. Wilts’ swagger can turn quickly into a vicious trash talk that is both lethal and personal. Bo proves to be susceptible to mental lapses when prodded by his opponent, and his draft status plummets when news of an aggravated assault in his past pops up. This is enough for Vince to shutdown Stanley’s pipe dream of bringing Bo into the Sixers organization. With Stanley taking on the front office and Bo fighting against his inner demons, the duo embark on a brutal, weeks-long boot camp filled with Rocky-style training montages to prepare the unsuspecting Bo for a lengthy pro career.

Juancho Hernangomez does a serviceable job as Bo. Amongst the annals of pro basketball players acting, he miles above that subterranean standard. Bo’s story – a child athlete whose journey is stunted when he has a daughter as a teenager – is familiar but poignant, and Zagar gives Hustle enough of a rugged tone to make the story feel lived-in. Still, this is mostly a Sandler vehicle, and he does a surprisingly good job in a role that seems to have required legitimate preparation. Stanley is a common Sandler archetype – a skilled but fatigued man whose persistent decency occasionally clashes with his volcanic temper. He’s made some memorable performances with this formula; Hustle isn’t quite one of them, but he is still particularly good.

There are times when this film is flatly silly in what it imagines basketball culture to be (team owners going on television to trash draft prospects; Kenny Smith playing a fictional character in a universe where the TNT Inside the NBA studio show still exists), but it has a sincere premise and solid understanding of what a basketball fan would want out of a movie like this. The feel-good sports movie is one of those genres we bemoan not existing anymore, and if we get one that isn’t terrible, I’ll admit that makes me grateful.