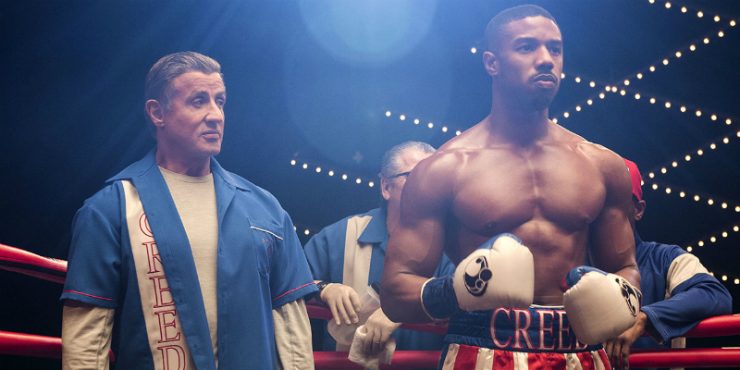 Creed II retreads on familiar Rocky mythology in ways that Creed rewrote it. This sequel is an act of simple reconstruction, as opposed to the first film’s deconstruction. Not only do Michael B. Jordan’s Adonis Creed and Sylvester Stallone’s Rocky Balboa return, but we also get the return of Ivan Drago (Dolph Lundgren), the villain of Rocky IV. The Russian boxer never recovered from his loss to Rocky, and has now spent decades training his son Victor (Florian Munteanu) to be a svelte, towering machine of violence who seems to be twice Creed’s size. The film’s script (by Stallone and Juel Taylor) not only includes frequent allusions to previous Rocky films, but also many direct references to specific events, over and over, as if to catch up those who are late to the party. Anyone familiar with events will find a great amount of redundancy.

The lack of trust in its audience is one of many things that separate Creed II from its predecessor. The 2015 Creed had much less credence for Rocky‘s lionization, and an important part of the first film’s accomplishment is how economically it addressed the franchise’s complicated racial dynamics.  Even Stallone’s performance in that first film shuffles hesitantly toward reinvention – and it may the best performance of his career. The sequel is too preoccupied with nostalgia, sentimentality and is plagued too often by a hackneyed collection of inevitabilities. Even Jordan, a certified movie star, feels uninspired here. The Adonis Creed in this film is entangled in a torment that, frankly, feels contrived. The cause of Creed II‘s downslide may come down to the absence of Ryan Coogler – already one of America’s best filmmakers at age 32 – who stepped aside for Creed II, to allow Steven Caple, Jr. the opportunity to direct. The result is a disappointing follow-up, a film with little value outside Rocky diehards.