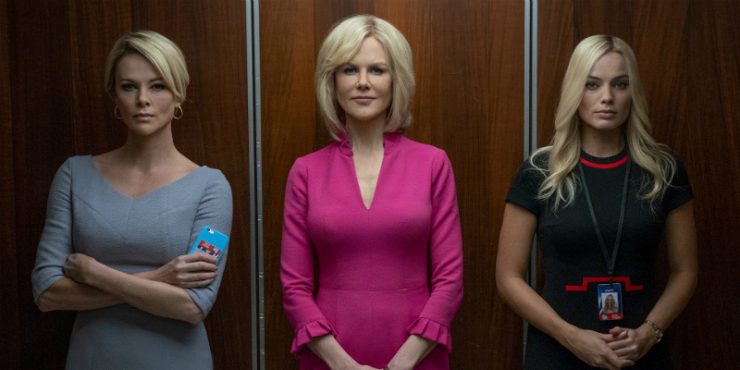 If nothing else, Bombshell is a feat of movie make-up. The amount of work in transforming this cast into a selection of contemporary media figures feels quite impressive. The film’s performances, led by Charlize Theron, are a precise arrangement of mimicry, meant to astound with the level of detail that has gone into turning these public figures into movie characters. The degree to which Theron resembles Megyn Kelly here is uncanny, slightly disturbing. She alters the tenor of her voice, her features seem shrunken. Nicole Kidman’s transformation into Gretchen Carlson is a bit less pinpoint, though that can be forgiven, since Kidman shares a lot less physical similarities than Theron does with Kelly. But even there, you can see the level of care and attention being paid to make sure this portrayal feels real. Why this attention? Why this care?

The story here is a fascinating one. Fox News, the titanic conservative news empire, was for decades led by Roger Ailes (John Lithgow), a notoriously ruthless executive who framed the controversial tenets of contemporary right-wing talking points. Ailes is a beloved figure throughout Fox, but that reputation is much more complicated among the female staff, who have often been victims of his incessant sexual advances. Carlson, the former Fox & Friends host, hires outside counsel to file a lawsuit for the toxic misogyny throughout the network. Kelly, one of the network’s biggest stars, also faces fierce backlash when she decides to criticize (then just presidential candidate) Donald Trump’s derogatory language toward women. Below them, it’s an open secret that lower level employees are taught to satisfy Roger’s urges, and perhaps some of his friends’ as well.

Director Jay Roach is fascinated by the self-destructive elements of political institutions. His biggest commercial success came from directing all three Austin Powers films, but his main interest seems to be flawed figures who are both victims and perpetrators of white collar prejudice and injustice. His approach is softer than, say, Adam McKay, who can’t seem to hide his disdain for audiences in the wake of our current American dystopia. He’s not as cynical, nor is he as creative of a filmmaker. Bombshell is directed with a sort of fly-on-wall style, where zooms and camera movement are meant to suggest the kind of provocative journalism that Fox News is famous for. It’s yet another detail meant to tie us deeper into this horrid world.

Perhaps the most interesting person in Bombshell is its fictional creation, Kayla Pospisil (Margot Robbie). Kayla is a platinum blonde beauty, who also happens to be the evangelical daughter of parents who – to quote her – treat the Fox News network the way some families treat church. Her zeal is matched by her ambition. Working for Carlson’s show, she makes a jump upward to The O’Reilly Factor, starring the network’s biggest star, Bill O’Reilly (Kevin Dorff). She wants to become on-air talent, and is willing to do anything to get there. Kayla’s arc (her character is meant to be a composite of several different real-life women) takes her devout Fox fanaticism and breaks it with a reality check of what “do anything” actually means. “Anything” is often simply one thing: exchanging sexual behavior for opportunity.

Robbie is phenomenal in the part – as is Theron and Kidman. So is, for that matter, Lithgow. These are all professional actors who know that the only way to properly play a character is to get to the heart of their humanity. Roach and his make-up artist Vivian Baker help them get there, bringing the cast as close to looking like these people as seems humanly possible. It’s difficult for me to watch Bombshell and its depiction of Fox News as a stable of frightened soldiers fearing professional mortality. Would Megyn Kelly, notorious for her lack of empathy and her propulsion of racist rhetoric, ever be as delicate as Bombshell is with her? The film briefly mentions the hypocrisy of her martyrdom when she joins Gretchen Carlson’s cause, but it can never commit to it, or else the foundation of what Roach is building will fall apart.

McKay’s Vice from last year made great hay out of Dick Cheney’s misdeeds, then turned the mirror on the audience for theoretically doing nothing while this man destroyed the country (or world). Bombshell is not as severe, and its sincerity when it comes to the plight of Ailes’ victims is real; you can feel it. The victory of Kelly and Carlson is an important one. After all, Ailes was removed from Fox News, and dropped dead soon after. But why are we so often asked to identify with those who do so little to identify with others? Many will watch for the great drama of Fox News’ embarrassment. I must confess that I have no interest in that despicable network, even if Bombshell is a story that comes at their expense. Ailes was a man who knew that conflict and controversy, no matter what, attracted viewers. Bombshell seems to mirror that philosophy a bit too closely.