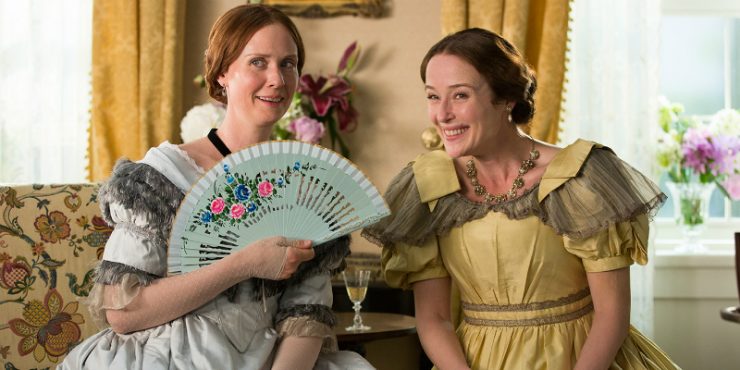 What can I say about A Quiet Passion except that when I wasn’t bored into distraction, I was asleep. Star ratings aside, I don’t feel like any review I write about this film would be fair since I didn’t appear to have the capacity to retain much of it. On the surface, the performances all seemed very manneristic and Terence Davies’ direction was shockingly dull. The film stars the great Cynthia Nixon as famed poet Emily Dickinson, from her late childhood to her death at 53. The movie traces her early spiritual rebellion through her career as a poet and her constant battle against sexism, loneliness and religious indignation. Nixon and Jennifer Ehle, as Emily’s sister Vinnie, are doing strong work here, but the whole thing felt all too under-performed to me, and surprisingly amateurish at times. There are heated discussions involving gender and religion in the film’s second half that may have been interesting to me if I hadn’t already checked out by that point. Perhaps A Quiet Passion requires more of a reverence for Dickinson as an artist than I currently possess. This film certainly didn’t motivate me to go out and search for it.

Written and Directed by Terrence Davies