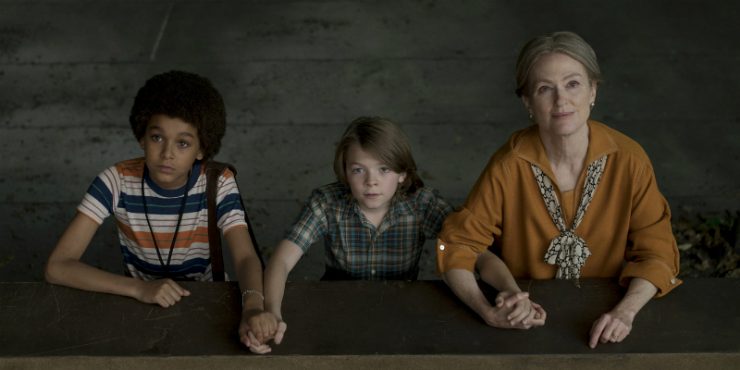 To make a film as atypical as Wonderstruck just two years after making a film as masterful as Carol is, for director Todd Haynes, quite the cinematic stunt that isn’t getting that much attention. Haynes is a filmmaker who adores passion and sensuality, his films are adult in more ways than one. Wonderstruck is a piece of young adult fiction, adapted from a novel by novelist/illustrator Brian Selznick (Selznick wrote the adaptation), filled with wonderful allusions to New York City and silent Hollywood. It has the kind of minor feel that some movies about children can have. The stakes seem way low.

Two stories run parallel throughout the film. The main one takes place in 1977 and is about an orphaned boy, Ben (Oakes Fegly), who runs away from his home in Gunflint Lake, Minnesota, after a lightning strike leaves him deaf. His mother, Elaine (Michelle Williams, in a charming, one-scene performance), died in a car accident before telling him who his father was, so he takes a bus to New York City to solve the mystery himself. All he has with him is his backpack, a wallet filled with cash and his new affliction. He quickly manages to make friends with Jamie (Jaden Michael), the son of a worker at the Natural History Museum.

The second story takes place in Hoboken, New Jersey in the 1920’s. A young deaf girl, Rose (Millicent Simmonds), lives with her domineering father (James Urbaniak) in a cold, loveless home. When she learns that her favorite film actress, Lillian Mayhew (Julianne Moore), is acting in a Broadway show, she too runs away to the city. Both Ben and Rose see the sights and smells of past time New York, both traveling as soundless vessels, unable to hear the ornery residents or the honking cars. Both also end up taking residence at the Natural History Museum. As the film goes back and forth between their stories, the connecting lines between them become clearer.

There are moments when Haynes seems to be kicking around the idea of making a silent film, and later in the film there is a sequence that is crafted completely out of diaramas. These moments are the most striking within Wonderstruck, the parts where Haynes precision in masking and cutting show the most. The overall story holds little weight, no matter how beautiful cinematographer Ed Lachmann makes them look, and how wondrously composer Carter Burwell makes them sound. The movie is about as interesting as any movie by an artist as talented as Haynes can be.

Selznick is responsible for the book that eventually became Martin Scorsese’s Hugo. Both movies look at film and place (with Hugo, it was Paris) in a fine nostalgia from childrens’ eyes. Hugo had the support of a much bigger budget, as Scorsese was experimenting with Spielberg-ian indulgence in visual effects and 3-D technology. Haynes seems to have a more personal connection to the material than Scorsese did, but he is also with working with a quarter of the resources. Wonderstruck is a very handsome movie with strong filmmaking that struggles with trying to recreate the wonder of childhood that is at the heart of its story.