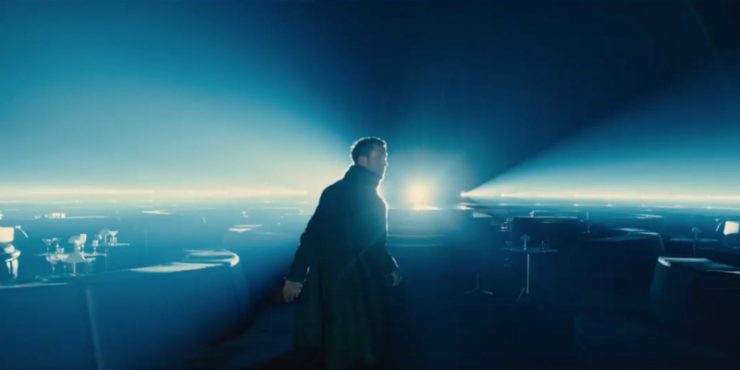 Let’s start with the obvious: we’ve never actually needed a sequel to Blade Runner. Ridley Scott’s 1982 film is a moody noir that found its audience over time and after several different cuts. That movie has a quaintness to it. Its star, Harrison Ford, seems to be almost slumming it throughout. At the peak of his movie stardom, he chose this morally complicated Philip K. Dick adaptation. By now, Blade Runner is a Hollywood classic, often ranked amongst the top of any Best Science Fiction Movie list. I’ve never loved the film. It’s a wondrous style piece, a brilliant orchestration of mood, and its melding of science fiction and film noir is unmatched; but the high-mindedness of its themes never did anything for me, because the film itself doesn’t really do anything with them. Thirty-five years later, the film’s sequel Blade Runner 2049 feels the same, except this new film is more self-conscious, less willing to accept its standing as a genre piece, and led by a much less charming performance.

Ryan Gosling is K, 2049‘s blade runner. K is a late generation replicant. Gone is the Tyrell Corporation, replaced by the Wallace Corporation, which is led by a new blind architect/engineer/all-around-megalomaniac Niander Wallace (Jared Leto). Wallace’s replicants don’t rebel like the old ones. They’re made to obey, which is why K travels Earth finding old models in exile, hunting them down to extinguish them once and for all, and keep the line of replicants pure and obediant. K accepts his replicant heritage, acknowledges his memories as false creations. He seems to float and mumble through his life, unexcited and ponderous. His only friend is Joi (Ana de Armas), an AI companion manufactured by the Wallace Corporation for a realistic domestic partner. After K retires one of his many targets, a shocking revelation is discovered by him and his boss, Lt. Joshi (Robin Wright), which could lead to all-out chaos throughout the world. This discovery could also redefine K’s own relationship with his own heritage. As K investigates further, the more danger awaits, as the house of cards surrounding replicant servility begins to wobble.

In his journeys, K digs up Deckard (Harrison Ford, reprising his role), in hopes of solving his case. Ford’s appearance doesn’t occur till well past the halfway point, his arrival a welcome surprise to any audience member who enjoys actors who emote. Much like his role reprisal in The Force Awakens, Ford is both playing upon our nostalgia while also giving a fully realized performance. 2049‘s themes of the dependability of memory only really begin to function once Ford arrives, because it is our memories of him that really bring those ideas into fruition. In both Force Awakens and 2049, Ford shows that he is still the best part of these franchises, and more so, film studios don’t seem to even trust making another one without his presence. That neither film has a substantial moment without him in it further proves that neither movie needed to be made to begin with. At least Force Awakens was fun.

That’s not to say that Gosling isn’t a capable movie star, but quite simply, he’s not Harrison Ford. In 2049, Gosling is recalling his performances in Nicolas Winding Refn’s films Drive and Only God Forgives; he is a complete blank slate with occasional oases of dialogue. Like Jake Gyllenhaal, I like that Gosling is always tinkering without how to be a contemporary movie star, but Gyllenhaal is more talented and Gosling gets too dug into the mechanics here. His entire performance is in his temples and his jowls. He wants to see how much he can convey without moving his eyes or his mouth and the answer is not much. Of course his performance is a result of director Denis Villeneuve’s intentional choice to draw out each second of 2049, testing the perseverance of the audience. Gosling as an actor plays out in his character what Villeneuve is accomplishing as a director: a mood of stale lifelessness meant to represent the soullessness of AI. The staleness occasionally rubs off on the film itself.

Much has been made already about 2049‘s disappointing box office performance, though watching the film it seems incredibly silly that anyone would guess this would be a commercially successful film. It’s burdensome and complicated by design. Villeneuve isn’t a director who enjoys producing things with broad appeal, and 2049 seems like a fumble in his attempt to try. His best films, last year’s Arrival and 2013’s Enemy, also played with the patience of audiences, but those films have better pay-offs, and are more comfortable with their own strangeness. Those films also had more dynamic lead performances from Amy Adams and (you guessed it) Jake Gyllenhaal, respectively. Villeneuve’s short but prolific career is impressive, even if most of his films don’t really work as narratives. With legendary cinematographer Roger Deakins, Villeneuve paints 2049 in beautiful sepia tones and harsh lighting. Villeneuve appreciates the impact of a good cut, and understands how to borrow from Ridley Scott’s 1982 vision and update it for today, but he does not have Scott’s ability to make a truly commercial film, which I actually like about him but it leaves 2049 in a strange limbo between commercial feasibility and artistic vision. Sound familiar?

My main issue with the 1982 film, as I mentioned before, is that it brings up a lot of hard-hitting questions about what it means to be human and the thin line between servility and slavery, but it never seems interested in even trying to address them, let alone answer them. 2049 has the exact same issue, but doubly so. Consider its two main female characters: Ana de Armas’ Joi, a sex slave hologram who will follow K to the end of the Earth to help him find his destiny; and Luv (played well by Dutch actress Sylvia Hoeks) Wallace’s head assistant and occasional Luca Brasi. 2049‘s script (by Hampton Fancher and Michael Green) wants to suggest an inner agency for these characters, but their actions and behaviors imply nothing but absolute servitude. That the script has Joi be the sexual aggressor in 2049 is both a make-up for the 1982 film’s most uncomfortable scene, and an irresponsible attempt to try and prove a character’s sexual independence – this is, in the end, what she is made to do. Luv, on the other end, is introduced as tormented, but never actually questions Wallace’s severe, murderous demands. By the end, the film flips and makes her the main antagonist, our sympathies apparently erased.

Villeneuve doesn’t strike me as a filmmaker who cares too much about his themes. His films Prisoners and Sicario are two slick, beautifully shot films that fall apart pretty easily under minor scrutiny. Narrative isn’t his strength, and he’ll probably spend his whole career searching for the perfect script. With good writing and strong acting, his films can be superb, but he seldom seems to have both. Arrival is the closest he’s come a complete film. There are elements of 2049 that I did enjoy, but mostly having to do with Deakins’ cinematography and Harrison Ford’s performance, but it does little to earn a running time that’s nearly three hours long (and feels it). It’s too bad this film doesn’t live up to the original, but then again what does?