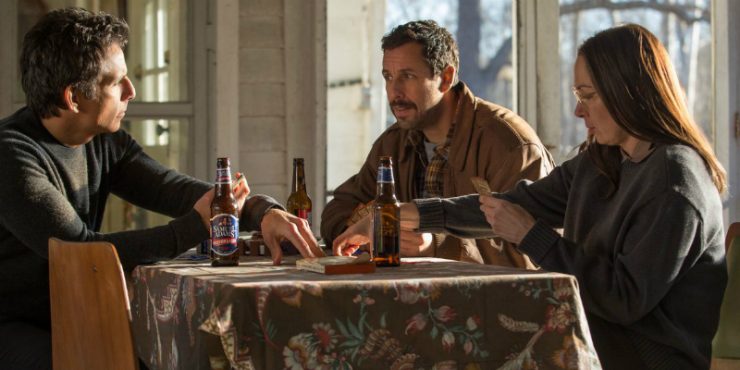 There’s always been a bit of amalgamation in Noah Baumbach’s work. At any point, his films can mimic the style Woody Allen or Francois Truffaut, his scripts could have the wry sense of humor of his former collaborator Wes Anderson or the harsh directness of Kenneth Lonergan. His new film, The Meyerowitz Stories (New and Selected), has a bit of Anderson’s The Royal Tenenbaums, occasionally recalls Jonathan Franzen’s masterful novel The Corrections, and quite often employs dynamic dialogue akin to David Mamet. All that said, this still feels like Baumbach’s most complete, self-assured film, and the one in which knowledge (or ignorance) of the influences throughout his films doesn’t matter. It’s a film aged in life’s choices and mistakes, soaked in regret and anguish. It’s remarkably funny and touchingly poignant. It’s much less angry than his other films, but there’s still a dormant damage hiding beneath everything. This will probably be the film that ends up defining his career.

The Meyerowitz family at the center of Stories is led by Harold (Dustin Hoffman) a noted sculptor and former professor at Bard University. Notoriety didn’t follow him into advanced age, and as he nears the end of a moderately accomplished but ultimately average life, he sees the commercial value of his work has vanished while his contemporaries are getting heralded retrospectives at the Museum of Modern Art. His oldest son, Danny (Adam Sandler) was a talented piano player who gave up pursuing a professional career to be a stay-at-home dad for his daughter Eliza (Grace Van Patten). With Eliza going off to college (at Bard, no less), Danny’s troubled marriage crumbles completely and he finds himself living with Harold and Harold’s third wife, Maureen (Emma Thompson), a crippling alcoholic. Jean (Elizabeth Marvel), Harold’s daughter, is the product of emotional and physical abandonment – mostly Harold’s. The result is complete resolve and servility. She’s wiped clean, ready to help the very man that was never there for her.

Harold’s younger son, Matthew (Ben Stiller), lives in Los Angeles. The product of a second marriage, Matthew was not damaged by Harold’s absence like Danny and Jean, but instead damaged by Harold’s constant presence and encouragement. Matthew has a young son, Tony, and a wife whom he only has because of the son. With Tony not even in grade school, Matthew fears his marriage is already on the outs, and chooses instead to focus his efforts on his successful accounting career. Matthew is the only one of Harold’s three children who was able to make a solid, responsible living, a fact that Harold cannot stop bringing up to Danny and Jean. The three children battle their incorrigible father, who himself still behaves childishly, lashing out at friends and strangers alike for small, occasionally imagined infractions. The consequences of his emotional abuse show themselves in all three children in different ways. Danny is a gentle soul but one who’s stricken with violent shouting tantrums; Jean is completely defeated, unable to show the slightest bit of self-confidence; and Matthew’s sense of self-aggrandizement is often at odds with his feelings of frustration in the face of his father’s clinical narcissism.

This is not Baumbach’s first pretentious, manipulative patriarch. His great 2005 film, The Squid and the Whale, had Jeff Daniels give an often hilarious, often dastardly performance as Bernard Berkman, a pompous academic trying to curry favor with his sons after a divorce. There’s a little bit of Berkman in Hoffman’s Harold Meyerowitz, but Baumbach is not making as much of a joke about it. Squid and the Whale showed the effects of this personality on children, while Meyerowitz shows how this proceeds into adulthood as well. At 80, Hoffman gives a strong, fully realized performance. Harold is completely deluded about his own talent and status, so angry at possible slights he may be receiving from his colleagues and the art industry. Hoffman’s Harold is slight, made fragile with age, but the legendary actor knows how to imbue this character with a lingering authority. In his sight, Danny, Matthew and Jean become helpless children again, and he’s only more than happy to exploit that effect for his own benefit.

As the Meyerowitz children, Sandler, Marvel and Stiller carry a good deal more of the film’s dramatic burden. The casting is spot-on. I’m not sure anyone else would have considered pairing Sandler and Stiller as brothers (though they are half brothers), but the choice works perfectly as the film examines their character. Sandler’s best characters have always been harmed products of arrested development, while Stiller especially excels at almost aggressive straight-ness; he’s unafraid of playing a Middle Class White Man with Problems. Stiller is strong as someone who must choose the monetary value of his professional success versus the resentment it creates amongst his family and others. As Danny, Sandler shows – as he has done a few times before – that he seems to have the preternatural tools to be a great dramatic actor. Not since 2002’s Punch-Drunk Love have I seen Sandler this invested in the utter human qualities of a character, and like that film, Meyerowitz is a display of  the comedian’s true acting chops. Danny’s sweetness hardly hides his disappointment in himself, and Sandler beautifully conveys that constant struggle. Marvel’s Jean is adroit but funny, a solid performance undermined by the film’s most disappointing aspect: it seems to be just as uninterested in Jean as Harold is.

Baumbach’s career has had an interesting evolution from the precociousness of Kicking and Screaming to the blinding rage of films like Margot at the Wedding and Greenberg. His films with Greta Gerwig hinted at a lighter mood and showed a capacity with the gymnastics of hightened comedic dialogue that he employs here in Meyerowitz to great effect. His latest film has neither the seething anger of his earlier films nor the blinding tweeness of his Gerwig films. It suggests a contentedness, a basic understanding that perpetual exasperation is a fundamental part of life without lashing out at the audience as he is sometimes prone to do. The film explores the choices we make as fathers, mothers, sisters and brothers; behaviors we choose to ignore, indignities we choose to tolerate no longer. It’s about the problems we inherit whether we like it or not, and our lifelong struggle to either overcome it or resolve ourselves as a final product. This is at the heart of a lot of Baumbach’s work – the eternal battle to find love for one’s self – but Meyerowitz is his best, clearest vision. Like the best films about family, it perfectly shows how they can often be the best and worst parts of your life, often all at the same time.

Written and Directed by Noah Baumbach