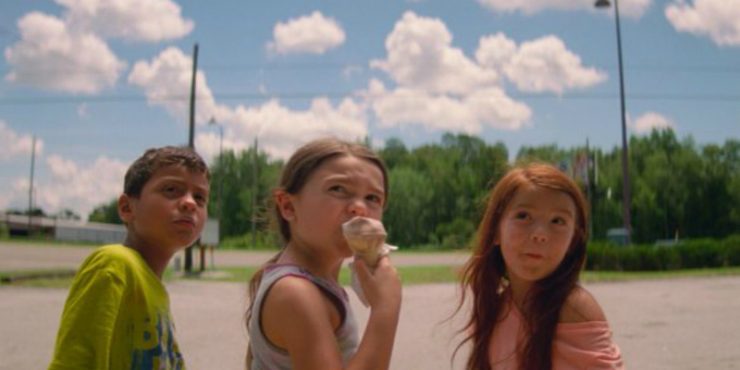 Many artists claim to want to speak toward the common people, to display the struggle of our lower classes, to make a case against our rigged socioeconomic structure. Few filmmakers walk the walk the same way that Sean Baker does, with an innate understanding that poverty does not equal purity, and destitution does not equal innocence. Victims of the system are often compelled into self-destructive decisions, a legislated mechanism of poor choices and broken homes. His latest film, The Florida Project, takes place at a motel in Kissimmee, Florida, a tourist haven right next to Walt Disney World. Just outside of the wondrous gates of the Magic Kingdom, garishly painted, off-Disney-themed buildings stand meant for those not planning for an extended stay. The Florida Project‘s main setting, a purple-and-yellow motel named The Magic Castle, isn’t meant for long-term residence, but that’s what our main characters are there for, and they’re getting their money’s worth.

The brilliance of this script (by Baker and Chris Bergoch) is its vantage point: 6-year old Moonee (Brooklynn Kimberly Prince), a precocious girl with a sharp tongue and a skill at finding trouble and alluding punishment. Moonee lives at The Magic Castle with her mother Halley (Bria Vinaite). Halley is an unemployed stripper whose dangerously hedonistic lifestyle keeps her and Moonee on the edge of homelessness, always a few days and dollars away from being kicked out by the motel’s manager Bobby (a fantastic Willem Defoe). Moonee doesn’t realize this though, as her life is a perpetual adventure. Along with her friends Scooty (Christopher Rivera) and Jancey (Valeria Cotto), Moonee runs, unsupervised, up and down the sidewalks of Kissimmee, pestering tourists, begging for free ice cream and entering abandoned condos. Moonee’s relationship with her mother is happy because Halley is little more mature than Scooty and Jancey. Halley’s sole contribution as a parent is irresponsibly shielding Moonee from the reality of their situation.

This film is such a unique portrayal of the wonder of childhood. Moonee’s existence is almost a defense mechanism. She’s trained herself to ignore the warning signs of her mother’s behavior by playing by the same rules (that there are no rules). Prince, in a performance that mirrors the powerful effectiveness of the young Quvenzhané Wallis in 2012’s Beasts of the Southern Wild, brings a sweetness to this rebellious part. At 6, Prince’s non-acterly performance works on different levels, first as an accurate portrayal of child rascalism, and also as a silent suppression of her perilous situation. There’s a very loud collection of people who say that children this young are incapable of capturing emotions this complex. I’d argue that even if this performance is the result of excellent directing and editing from Baker, it’d be remiss to not give an actor credit for the result, no matter how young they are.

Like his last film, Tangerine, Baker finds a way to connect with those living outside of mainstream American society. His humanism in the face of social norms seems limitless. Halley is a non-stop hurricane of poor decisions piled atop errors in judgment that usually erode her closest relationships. When she can’t find work, she turns to buying perfume wholesale and trying to sell it in hotel parking lots to unwitting tourists. When that doesn’t bring in the money she needs, she turns to prostitution. Halley’s desperation is a situation of her own making, but this does not mean she is not desperate. Her own debasement and violent temper comes from a sense of self-preservation: she must protect her relationship with Moonee, the only true human relationship that she has left. When Bobby gets hints of the things Halley is doing to keep her head above water, he shows concern, but there’s only so much he feels he can do from his position. He, too, doesn’t want Moonee’s unblemished innocence shattered.

Bobby, The Magic Castle’s functioning manager, superintendent and apparent protector, struggles with all his tenants. He knows they’re not supposed to treat his place as a home, but also accepts their rent money. He sees the rambunctiousness of the children and recognizes it as harmless even if their behavior costs him time and money, focusing on repairs and general guest maintenance. It’s hard to imagine a motel manager working this hard and still finding a way to empathize with the people who cause him so much grief, but Defoe’s performance truly brings that to life. His interactions with everyone from Moonee to his embittered son Jack (Caleb Landry Jones), showcase him as a patient but ultimately lonely man. His job is essentially 24 hours, but he soldiers on as if a penance for past sins that are not revealed. Defoe, one of our very best, most expressive actors, gives one of the best performances of his career.

The Florida Project doesn’t have the same sense of abandon as Tangerine. That film was an unapologetic freight train through the underbelly of transgender prostitution in the greater Los Angeles area. This time around, Baker’s portrayal is more somber. He never asks for forgiveness for his wayward characters, but understanding. Specifically, he wants an understanding of the isolation that comes with living outside of what society deems normal. With Tangerine, it was non-binary gender and sexuality. With The Florida Project, it’s the vicious cycle of poverty, and society’s unsympathetic role in perpetuating this system. Moonee doesn’t need privilege or money to enjoy herself; she’s able to rise above Halley’s tragedy, which is the soul of what The Florida Project is all about. The film’s third act, however suggests a rude awakening that the 6-year-old Moonee is not prepared for, where her skill at imagining life in an actual magic castle will be needed more than ever.