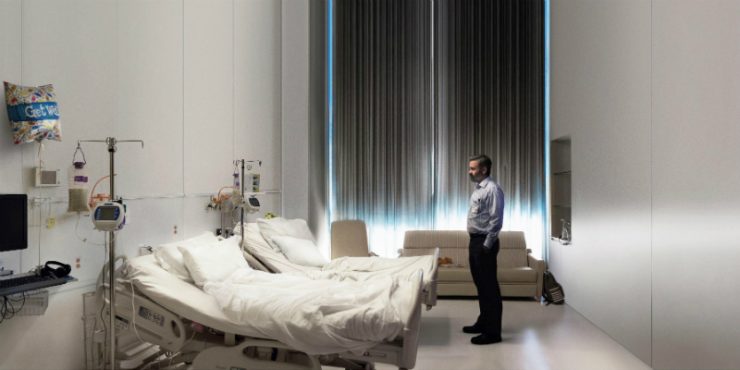 Against my better judgment, I seem to always think Yorgos Lanthimos’ films are excellent. He’s incredibly meticulous in his dissections of human behavior. He seems completely infatuated with the seemingly casual cruelties that human beings are willing to inflict on each other. Just in time for Halloween, he releases The Killing of a Sacred Deer, a film that seems to be the very definition of a Scary Movie. The film is disturbing and haunting, it doesn’t need graphic imagery to provoke audience shock, but also isn’t above using it when the time comes. It’s a stark exhibition of despair, and a truly precise piece of filmmaking, a film that perhaps sits outside of the parameters of a typical horror movie, but might be the most frightening film of the year.

Lanthimos penned the script with his usual writing partner, Efthymis Filippou, and they fill the story with the kind of blood-curdling dread we’ve come to expect from them. Unlike Dogtooth and The Lobster, their two most successful writing collaborations, Sacred Deer does not dwell within an alt-reality, satirical setting. It might be Sacred Deer‘s idyllic Midwest American setting that makes this film sink deeper than their other screenplays. In the heart of Cincinnati, a seemingly perfect domestic unit stands as a beacon of excellence and achievement. The father, Steven (Colin Farrell) is a cardiologist; the mother, Anna (Nicole Kidman), is a ophthalmologist who still manages to be a full and loving parent; the daughter, Kim (Raffey Cassidy), sings in the choir; and the son, Bob (Sunny Suljic) is learning the piano. They are the definition of American accomplishment, with no evidence of disappointment or blemish.

Of course, these kinds of families are hardly without secrets. Steven’s is a relationship with a teenaged boy named Martin (Barry Keoghan). Martin is an obviously troubled young man who visits Steven constantly at the hospital, as well as scheduled visits at diners and near the bridge. Steven gets the boy gifts like watches, Martin brings Anna flowers when he is invited over for dinner. When Steven comes to Martin’s house for dinner, he meets Martin’s mother (Alicia Silverstone), and begins to comprehend the emotional dysfunction in their home. When trying to distance himself from his young friend, Steven unwittingly sets off a horrifying reaction of vengeance performed by Martin in the slowest, most excruciating way possible.

Sacred Deer‘s descent into terror is relentless and extensive, and it takes its toll on the audience. Dogtooth and The Lobster were nauseatingly offbeat satires. They looked at parentage and romantic love, respectively, and examined through a prism of extreme mistrust and terror. Sacred Deer is taking down domestication, the kind of Midwest suburban home life that can be a Earthly stand-in for paradise. Of course, this family isn’t as perfect as they may look. Steven is a recovering alcoholic, and occasionally Kidman’s Anna shoots him a look with decades worth of disappointment. Martin’s sick obsession with balancing the scales is psychologically exhaustive, violent and even darkly funny at times. In most of Lanthimos’ films, the absurdity gets ratcheted up so high, your crippling tension gives way to wide swaths of laughter.

Farrell and Kidman’s performance are perhaps what pulls this film out of complete hopelessness and nihilism. There was something almost sweet about the desperation in the Hotel-dwellers in The Lobster, or the naive children of Dogtooth. The Killing of a Sacred Deer gives us nothing like this. Instead, Lanthimos seems more interested in high-angle cinematography (DP:Thimios Bakatakis). The film is shot and scored very similarly to Kubrick’s The Shining, though Sacred Deer is much less expressive. Like any great horror film, Lanthimos sticks the horror within you well before it appears on the screen. This movie is so incredibly unpleasant, that I can hardly recommend it as anything other than a flawless piece of filmmaking with incredible ensemble of performances. If you’re able to stomach everything else on the screen (and I was, barely), then you’re in for quite a treat.