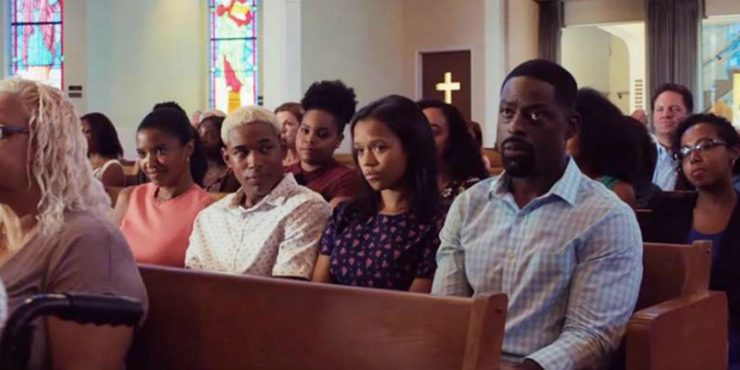 Throughout the three feature films by Trey Edward Shults, families face tragedy and trauma, in both past and present tense. They seek survival, and sometimes they find it. Sometimes, uncovered truths only bring further pain, and revelation only makes previous wounds more severe. His latest film, Waves, is his widest in scope and ambition. It explores similar themes as his two previous films (the incredible Thanksgiving horror show, Krisha, and the dystopian suspense story, It Comes At Night), but eschews metaphor for direct, visceral emotion. The characters here are pulsing with grief, anxiety, anger. Spilling out like an open vein, Waves is a sweeping, passionate film that only appears to brutalize its audience before revealing a remarkably tender center.

From the very beginning, Shults has proven himself to be not only a fierce examiner of troubled people, but also an incredibly exciting filmmaker. Krisha, his debut which is shot exclusively in one house, showed his talent for odd, unsettling camera composition and kinetic editing techniques. Shults and his cinematographer, Drew Daniels, have a way of crafting attractive, Terrence Mallick-type imagery while always presenting them in an unnerving way, masterly keeping his audience in a tense imbalance. For him, there is little separating the euphoric and the devastating, and that contrast, both in narrative and in the film-making, is what makes his films so compelling. Waves may be his most complete tale yet.

Shults reunites with one of his It Came By Night stars, Kelvin Harrison Jr. (who was also strong earlier this year in Luce), who plays Tyler Williams, a high school senior from a middle-class family in South Florida (in an interesting quirk, their home is the same house used in Krisha). Tyler is a star on his high school wrestling team ready for another stellar season before college. Shoulder soreness presents some pause, but Tyler’s father, Ronald (a riveting Sterling K. Brown), pushes his son toward perfection, obsessed with his son staying in tip-top physical shape to prevent nagging injuries form derailing his scholarship potential. Tyler respects his father, but resents his overbearing nature. His one respite from the pressures of his senior year, is his girlfriend Alexis (Alexa Demie), with whom he shares a sweet, but passionate relationship.

Tyler’s sister, Emily (Taylor Russell), is a few years younger. She is shy, seemingly fine being in the shadows of his limelight. Ronald is flagrantly less interested in her future, much to the chagrin of her mother, Catharine (Renée Elise Goldsberry). When Tyler’s shoulder injury becomes more serious than initially thought, his wrestling season and college athletic career is put into jeopardy, causing the already anxious teenager to become more stressed about his life and his future. When his relationship with Alexa becomes further complicated by a possible pregnancy, Tyler is sent on a downward spiral not aided by high school drinking parties and stealing Ronald’s prescription pain medication.

At the risk of saying too much, I will mention that Shults’ widely inventive script turns on a shocking event about halfway through the film, in which the story’s focus transfers from Tyler’s chaotic insecurities to Emily’s somber grief. Only slightly less than ignored, her feelings towards her parents and brothers are perhaps not apparent, but that’s only because no one has ever asked her. Things change when she meets Luke (a delightfully goofy Lucas Hedges), another member of the high school wrestling team who is attracted to the star athlete’s sister. He sheepishly asks her out and is the first person in a while (certainly the first person in the film) to truly pay attention to her.

Waves‘ second half is brooding and melancholy, unsure of its recovery from the tumultuous first half, but its staying power is much more persistent. It’s lucidity contextualizes what we’ve watched before and puts the film’s themes in front of us with a clarity that manages to avoid being didactic. Shults is doing something incredibly tricky here, which is to earn the harshness of the film’s first hour after you’ve already been assaulted by it. After all its gross misconduct, it spends its second hour asking for forgiveness. If anything, Waves is a statement for forgiveness and empathy in a time when it feels like those things are impossible to find. It implores understanding over demonization, love over anger.

It is also about survival, and the many forms it can take. Sometimes survival is simply choosing to live or refusing to die – and understanding the difference. Shults (aided by a loud, but sobering score from Trent Reznor and Atticus Ross) crafts a story of self-made tragedy, but only to show that a human spirit is very difficult to break. He stresses the relative normalness of the Williams family (their blackness is both not a major plot point of the film while still being a major element of the film’s themes), to prove the capabilities of good and evil in every one of us. Waves presents surviving trauma not as a course toward wellness, but a fact of life.

The ensemble here is superb, fully on board for Shults’ ferocious, soulful excavation. Harrison Jr. and Russell, as the two-headed lead are heartbreaking as both sides of the film’s cataclysmic event. Brown and Goldsberry are more modestly powerful as responsible adults whose stable parenting is no match for the pressures that overcome their two children. The performances are audacious and unfiltered, unafraid to embrace high-octane emotion or even spill into melodrama. Shults’ stories, so braced with past pain and present devastation, are wearying. Not even the audience is able to escape unscathed. But he has evolved into one of our premiere cinematic voices. A filmmaker and storyteller who stresses connection and healing unlike many of his peers.