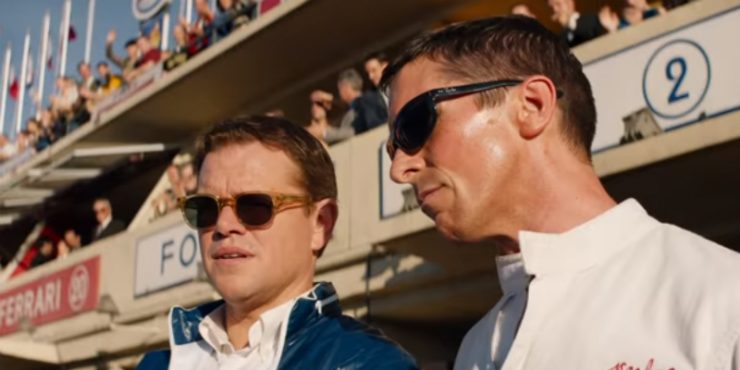 Despite its title, Ford v Ferrari is less a tale about a storied Twentieth Century battle between two titanic auto manufacturers – it is partially about that – but more a showdown between strident male egos, all looking for personal glory under the veil of corporate success. The Ford Motor Company in this film is struggling with a market of Baby Boomers who are looking to buy their first car and are turning toward sexier options. How winning a marathon race in France is meant to solve this issue is explained in one of those early scenes in a movie that relies more on the bravura of the dialogue than any actual logic. Regardless, Ford Motors decides that defeating Ferrari at the Le Mans race in France will give them the reputation boost they need.

This is where are stars come into the picture. Matt Damon plays Carroll Shelby, one of the few American drivers who has won the 24-hour race at Le Mans. Shelby is forced to retire from driving after being diagnosed with a heart condition, and turns his focus toward manufacturing custom sports cars. On the side, he manages a lower-circuit racing crew. They perform well, despite a lack of sponsorship, and that’s mostly due to his driver, Ken Miles (Christian Bale). A British ex-pat, Miles is a savant behind the wheel whose instincts, while occasionally dangerous, often prove fruitful on the track. Miles has a reputation for being difficult, though he only appears to get upset when people disagree with his methods – which is often.

Despite his British heritage, Miles comes from a long line of American male movie characters whose two main personality traits consist of not playing well with others and a disregard for the rules. For good measure, these films often provide this character with a wife (and this film does, played well by Catriona Balfe) equipped with a bottomless reservoir of patience, support, and knowledge of what this man does for a living. In Ford v Ferrari, Miles’ penchant for raising others blood pressure is assuaged by his natural talent and unmatched know-how. His hot temper is the price one pays for excellence. That price becomes a bit too high for some.

That mostly comes in the form of Leo Beebe (Josh Lucas), a Ford executive who reports only to company head, Henry Ford II (Tracy Letts), the grandson of the Henry Ford. Ford decides to spare no expense in his quest to beat Ferrari at Le Mans – no doubt motivated by Ferrari turning down a merger with some vitriolic rhetoric – and with advice from Lee Iacocca (Jon Bernthal), hires Shelby and Miles to make the dream a reality. But Ford makes Beebe the head of Ford Racing, and Beebe has less interest in racing glory. Beebe doesn’t want the volatile Miles being one of the faces that Ford Motor Company must present to the public, and fights Shelby tooth-and-nail to get a “Ford Man” behind the wheel.

This infighting is Ford v Ferrari‘s main source of suspense, which leads to the question of why the film isn’t more accurately called “Ford v other people in Ford” (admittedly, not as good of a title). The truth is that racing movies need these hooks of conflict to distract that beyond the adrenaline of high speed car racing, we are mostly just watching men drive around in circles. The film’s script (by playwright Jez Butterworth, with his brother John-Henry and Jason Keller) finds itself manufacturing these little dramas often, and when they’re not between Beebe and Shelby, they are between Shelby and Miles, who both are possessed by a tunnel-visioned competitiveness that can lead to little skirmishes, like an unkempt, impromptu wrestling match midway through the film that ends with both bloodied while sharing soda bottles.

This film is directed by James Mangold, who I’d call a superlative for-hire studio director and a talented writer (he received an Oscar nomination for his writing work for the Wolverine movie, Logan, which he also directed). Mangold’s competence as a director insures that Ford v Ferrari is a stylish piece of filmmaking that knows how to both entertain and connect emotionally with the audience. Pulling these two things off in equal measure is no easy feat, and Mangold appears to do so without much effort (which is usually evidence that there was plenty of effort, indeed). This is a solid mainstream film, the kind of adult drama with broad appeal that many (including me) complain are no longer being made.

That said, I don’t think it’s asking a lot to want more. Ford v Ferrari gives us more of the same difficult men, some propped up by sensible women, that we’ve seen time and again. Bale has always been charismatic enough to make characters like this really pop, while Damon further cements his reputation as a dependable, generous actor, whose lack of vanity often makes his films better, even if his individual work gets overshadowed. But I think we deserve better than two tremendous actors delivering solid work. Something more substantial than another story about a group of men winning intangible victories of spirit. After all the handwringing over films like The Irishman, Once Upon a Time… in Hollywood, and even Avengers: Endgame, 2019 finally does have a film that’s too long. It’s also probably too familiar.