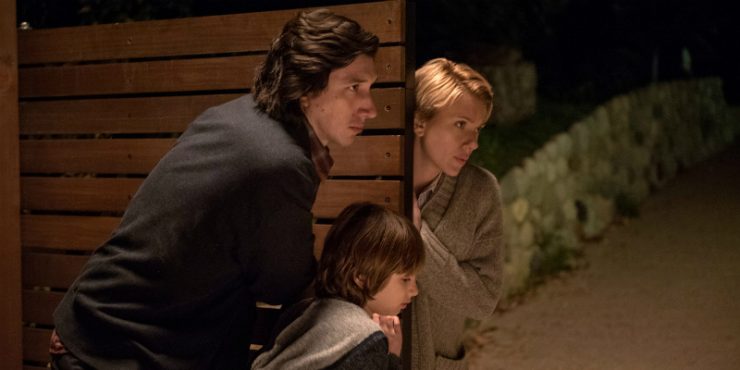 Marriage Story is the most violent movie that I’ve seen this year. Its characters are measured, intelligent, nice people turned ruthless by the anxiety of a divorce lawsuit. This is the latest release from Noah Baumbach, the 21st century master of familial melancholy and cringe comedy. His films, always somber if in different ways, speak to his fixation on the seeming unfairness of human existence. His characters, usually neurotic but prideful New York people (perhaps this goes without saying, but his characters are always white), are often beaten by the breaks of life, and situations outside of their control usually spiral down, often helped by their mismanagement of the few things they can control.

Baumbach’s films can be needlessly angry, and loose in a way that feels aimless, though there are several very good ones (The Squid and the Whale, The Meyerowitz Stories (New and Selected), Greenberg). The anger pulsing throughout Marriage Story works perhaps because it stems from a hatred that can only be bred from love. Two people (played perfectly by Adam Driver and Scarlett Johansson) decide to end their marriage, which will also end their creative and professional partnership. They have a young son named Henry (Azhy Robertson), who is both oblivious to their tensions while totally aware of their uncoupling. Their commitment to ending things amicably flips when the reality of their separation becomes clear, and they’re forced to admit many truths about themselves and their relationship.

Driver plays Charlie Barber, a New York City theater director whose bold, avant-garde productions are a word-of-mouth sensation throughout the city. Equally beloved are his plays’ star, his wife Nicole (Johansson), whose acting talent and creative input turns Charlie’s modest company into an artistic enterprise with a spotless reputation. Their oncoming divorce is treated more like a bummer than a tragedy amongst the company (perhaps they’re more familiar with Charlie and Nicole than we will eventually become), and it seems a forgone conclusion that their end will be met quietly and without fanfare. They’ve agreed to keep lawyers out of it, to settle everything amongst themselves, especially to ease the transition for Henry.

When Nicole goes to Los Angeles to shoot a pilot, she’s introduced to Nora Fanshaw (Laura Dern) a divorce attorney with show business clout and a reputation for getting over on her opponents. She’s quick to explain to Nora how much she has sacrificed for Charlie’s vanity, and her right to ask for more than an “amicable divorce”. Hiring Nora shocks Charlie, who never anticipated having to do more than sign divorce papers, especially as his experimental play makes its debut on Broadway. When Nora advises Nicole to name Los Angeles as the family’s official home, Charlie’s situation becomes clear: he will have to choose between his decade-plus position within the New York theater community and seeing Henry in California.

At the root of their separation is Charlie’s creative ego, which often relegated Nicole to simply an actress as opposed to a full-on collaborator. Her own film career (she was in a hit teenage sex comedy) stopped in its tracks when she chose New York theater with Charlie instead, but life within his realm proved she would never be considered his equal, even if they did portray an equal amount of talent. As for Charlie, his experience with love and marriage showed a naiveté – and an ignorance. So engrossed in his writing and directing, he always took it for granted that he and Nicole’s interests were the same, and never considered that she would eventually want something more than he can give.

Hiring Nora puts Charlie on his heels. At first, he hires Bert Spitz (Alan Alda), whose realistic but optimistic advice about how to proceed matches Charlie’s own hopes for things to be done civilly. When Bert’s small potatoes operation proves weak against Nora’s voracious tactics, Charlie switches to Jay (Ray Liotta), another tough-as-nails L.A. divorce attorney who can match the kind of offensive that Nora specializes in. Soon, what was meant to be “amicable” turns into (as Nora calls it) a “street fight”, with insults mercilessly being slung and characters being smeared. Trying to be a father to Henry in Los Angeles and directing a play in New York City, while managing a testy divorce trial, proves to be more of a juggle than Charlie can handle, and finally, with their resentments equal, it turns into a bloodbath.

There’s a lot of self-professed autofiction throughout Baumbach’s work, and his own marriage to actress Jennifer Jason Leigh flamed out earlier in the decade before he began his own romantic/creative partnership with Greta Gerwig. That said, Marriage Story is perhaps the most free of any of his films of the kind of sardonic, cynical tone that often lingers over each of his features. It still maintains his sharp, anxious form of humor, and even contains elements of screwball comedy that he’d experimented with in his Gerwig collaborations Frances Ha and Mistress America. The film is perhaps funny enough to be called a comedy at the Golden Globes, but this film is tragic, even if the proportions are not quite Shakespearean.

Driver and Johansson, two young actors trying to outrun commercial movie commitments before they overtake their creative soul, are superb in this film. Driver has spent the last few years playing roles with great sensitivity and compassion, almost as if to combat the brash, uncaring roles he’d been typecasted into as a young actor. His Charlie is plagued with pride despite his strong effort to be a good husband and father, and Driver’s portrayal of his downfall – his final epiphany of his own role in his divorce – is crushing, even it is a proper comeuppance. Johansson, so infrequently allowed to play a part this emotionally complex, is shattering as Nicole, a woman appreciating the emotional and spiritual freedom that comes with leaving Charlie, even if she has to break a part of him in order to do it.

This feels like the best film that Noah Baumbach will ever make, a perfect synopsis of his somber worldview while still supplying a sturdy antidote of wisdom. The movie has the emotional brutality of something like Blue Valentine, though spiritually and stylistically, it is much closer to Kramer vs. Kramer, which understands the physical toll of a divorce without needless histrionics. Melodrama is not needed because the deception and betrayal of divorce is dramatic enough. While life does indeed go on in both Marriage Story and Kramer, the scars still lay deep. What doesn’t kill you doesn’t necessarily make you stronger, but perhaps it makes you weary. By the end of Marriage Story, you may be weary as well.

Written and Directed by Noah Baumbach