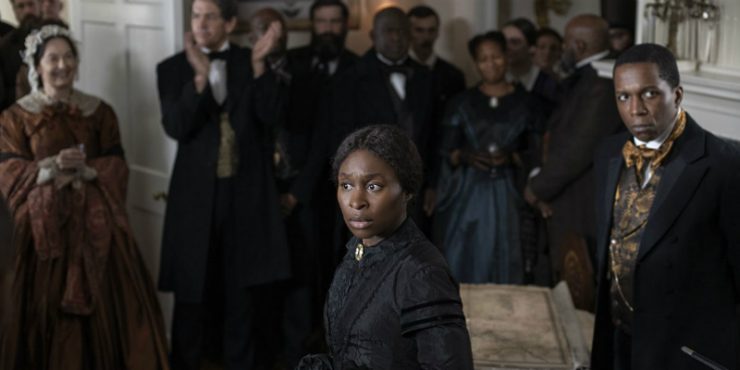 Is there a more courageous story in American history than Harriet Tubman’s? You’d be hard pressed to find one. Her struggle and sacrifice speak to the best and worst of this country’s history, and yet, her story still feels undertold; treated mostly as an obligatory piece of Black History month exhibitions. Tubman’s work and life are foundational to the spirit and mythology that many Americans believe makes them so special, though the evil she fought against is much more indicative of what America was, and in some ways, still is. Harriet is a rather typical film biography, structured more as a superhero origin story than a historical document, but the film still stings with this nation’s greatest sin, and champions one of our greatest warriors against it.

The prospect of making a film about Tubman is daunting. How can a movie portray the bravery and sacrifice this woman performed? It makes sense that the film passed through several hands in development, before ending up at Focus Features with director Kasi Lemmons. Lemmons, whose films have been uneven since her powerful debut, Eve’s Bayou, in 1997, commits to the deification of Tubman, portraying her as a savior literally touched by God. It shouldn’t really work, but Lemmons is remarkably sincere, and while the film spills into melodrama, it’s hard not to be moved by Harriet‘s story which, it goes without saying, is a truly powerful one.

Cynthia Erivo (she made her film debut only last year in the incredible Widows) plays Tubman, a slave from Maryland who escapes after her master refuses to make good on a promise to free her and her family. She leaves everyone behind, including her parents, her siblings, and her husband, John (Zackary Momoh), and travels by herself to freedom in Philadelphia. She meets the negro abolitionist William Still (Leslie Odom Jr.) and finds a home with Marie Buchanon (Janelle Monáe), a free woman and proprietor who provides housing and assistance to runaways. Despite these new comforts, Harriet is not in Philadelphia long before she vows to go back South, unable to enjoy freedom while her family stays in chains.

Against the advice of Still, she returns to Maryland and her former plantation, where Gideon (Joe Alwyn), the son of her former master is still in a heated search to find her. Intending only to bring back her husband, Harriet instead returns with over half a dozen people, some of which she has met for the first time. Her return with this group shocks Still, who did not believe she could accomplish it. This is a familiar plot point throughout Harriet, men underestimating her, and Lemmons is sure to make you know the degree to which Tubman’s force of will drove her to complete such dangerous escape missions. Harriet is also helped by visions, ones she believes come from God himself, which allows her to sense danger and help lead runaway slaves to freedom.

This pious detail may be, for many, the hardest part to accept – at times, it was for me. What’s important to remember is that Harriet does not claim that Tubman received messages from God, but it claims that Tubman believed she did, and it was that faith that fueled her need to break down the horrors of slavery. The moral clarity with which Lemmons chooses to tell this story is a natural enemy to the complexities that make characters interesting, not to mention that in order to tell this story within three hours, the script (by Lemmons and Gregory Allen Howard) has to perform a shorthand with historical events. Certain details – like Gideon’s obvious love of Harriet, or the consequences of Harriet’s heroics on those left behind – are underplayed in the face of the plot’s forward momentum.

Harriet, as a film, is not particularly well-made. Its structure and composition is much closer to prestige television than cinema, and its narrative tensions feel very produced and unnatural within the characters. Lemmons’ film relies almost entirely on the performance of Erivo, who feels very much in step with the film’s sentimental core without letting the performance spill into that sentimentality. Her Harriet Tubman is motivated by clear truths about humanity, and is unfazed by the warnings of those who are less brave than she is. The performance is spirited and brings life to a woman who’s existed to most only in sepia-tinted photographs. Erivo lifts an otherwise tepid film, and makes it a stirring, inspirational tale.