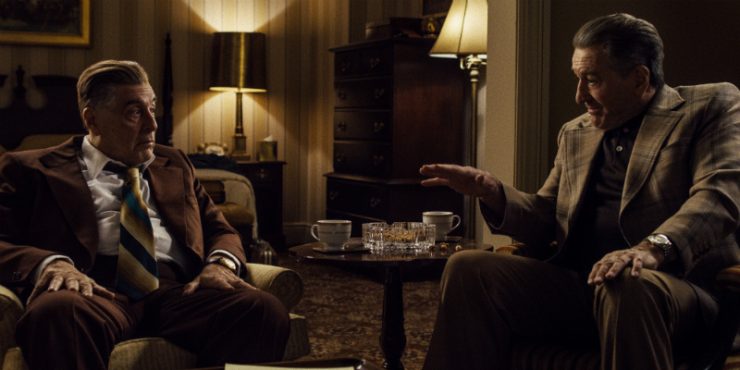 I admire the fact that there isn’t any version of “Based on Real Events” in or around Martin Scorsese’s latest feature, The Irishman. The robust new film is filled with the recollections of a man named Frank Sheeran, who did in fact exist, and he discusses his close relationships with notorious Teamsters leader Jimmy Hoffa, as well as the ruthless Bufalino crime family. Those are real people too, though you probably already knew who they were. Steven Zailian’s script is framed around Sheeran sitting helplessly inside an assisted care center, old and frail, finally willing to spill the beans on his life story. All still, this is not a film interested in history, but one instead obsessed with those who live to tell it. The Irishman is a film about the inescapable fury of time.

Sheeran is played by Robert De Niro and Hoffa is played by Al Pacino. That in and of itself feels incredibly exciting. De Niro has long lived inside Scorsese’s universe, while this is Pacino’s first visit. The two legends – often unfairly compared, too often derided for late-career missteps – are given much more familiarity with one another than you’d expect. This is not the diner scene in Michael Mann’s Heat, where the tension and respect between the two of them gets thrown right up on the screen. There is no competition between the them, perhaps because they’re playing passionate friends. But much like Pacino’s Michael Corleone in The Godfather Part II, De Niro’s Frank is forced to make a tragic decision that ruins his closest friendship.

The film is based on the Charles Brandt book, “I Heard You Paint Houses” (in a strange quirk, this is the phrase that comes up on the title card at the film’s open, NOT The Irishman), in which Sheeran confesses his role in Hoffa’s murder. Sheeran’s account has been “discredited” by two publications, one in Slate and the other in the New York Review of Books. Scorsese and Zailian decide early on that Sheeran’s story will not be heavily dependent on facts, but instead a document of a much older man taking stock on the scope of his life. In the annals of history, Hoffa’s disappearance is still one of our greatest unsolved mysteries. What The Irishman posits is this: if a man is willing to cop to such a crime, what other stories is he willing to tell?

What is clear throughout is that Sheeran is not shy about his involvement in many, many murders. Ever since his days fighting Germans in World War II, the sight of death has left him undisturbed. So when he becomes a truck driver after the war, he has no problem doing favors for Russell Bufalino (Joe Pesci, another Scorsese veteran) who may ask Frank to straighten guys out who may not jibe with how Russell and his crime family like to conduct business. Russell appreciates the competence and straight-forwardness with which Frank does his job, and in turn, Frank wins Russell’s loyalty which is ironclad if handled correctly. It’s Russell who introduces Frank to Jimmy Hoffa, as Jimmy needs a little extra muscle to fight against those who try to challenge his monolithic union empire.

As head of the Teamsters, Hoffa is (as Sheeran describes him) second only to the president in terms of political power in America. The sheer size of his labor force and wealth of funds makes him untouchable. Unfortunately, there are many who want to topple him down, and Hoffa is not above using men like Frank to intimidate his competition. The two men become quick friends. Jimmy is even able to entertain Frank’s daughters, who show little affection toward their father. After leaving their mother, and no doubt scaring them with his shockingly violent tendencies, the Sheeran girls flock to Jimmy’s good-humored childishness, while Frank can only watch them have a good time.

Crime families, like the Bufalinos, depend on Jimmy and the Teamsters for funding for their Las Vegas enterprises. With no hope for bank loans, only Jimmy can give them the money they want, but in-fighting and back-stabbing quickly gives way to power struggles and Jimmy resents those who try to threaten his throne. More often than not, Frank is the middle man between the mafia and Jimmy, delivering messages between two crooked enterprises who both think they run the show. In Frank’s eyes, Jimmy Hoffa and the mob controlled everything, putting actions into place that led to everything from the Bay of Pigs Invasion to the assassination of John F. Kennedy. Sheeran manages to stay safe, as both sides vouch for his integrity, but the same can’t be said for those on either side of him.

Scorsese has always been fascinated by the way violence and crime runs concurrent to the everyday nature of American life. In Frank Sheeran, he gets a like-mind, someone who views wiseguys and their disciples as the true knights of the kingdom. Throughout The Irishman Frank casually looks on as more powerful men make decisions, and often these decisions dictate his actions. He doesn’t seem to question this, because this is the America of Frank’s reality: a might-makes-right approach in which strength and loyalty are the two most valuable traits a person or institution can have. Scorsese, always a man to play devil’s advocate with misbehaved men, does not editorialize, he leaves that for Frank to do himself.

Which is why the final half-hour of The Irishman is the film’s most important. By the film’s final act, Scorsese and his stellar filmmaking crew (Rodrigo Prieto as cinematographer and Thelma Schoonmaker as editor are, as you’d guess, divine) turn away from the blood and guts of politics and organized crime. Sitting in assisted living, Frank is utterly alone, facing death and facing a reality he didn’t figure much as he worked with Russell and Jimmy. His daughters estranged, his friends dead, The Irishman directly looks mortality in the face unlike any other gangster picture I’ve ever seen. As Frank avoids getting whacked throughout his life, he misses the fact that his loyalties have left him without support and without love.

The Irishman is not a perfect film. The film dodders at times throughout it’s 3.5 hour running time, and frankly, it’s quite shocking to see a film that is this long pay so little credence to any of its female characters. But its soft, melancholy approach has an incredible staying power. Pacino and De Niro – two actors whose careers are filled with invisible intersections – are amazing here, as is Pesci who discards his usual strongman persona for a calmer, more serene form of menace. These three men and Scorsese are delivering work here about themselves, and the scope of their careers. Most artists don’t get a chance to be this reflective on such a massive stage. Scorsese doesn’t take that chance for granted.