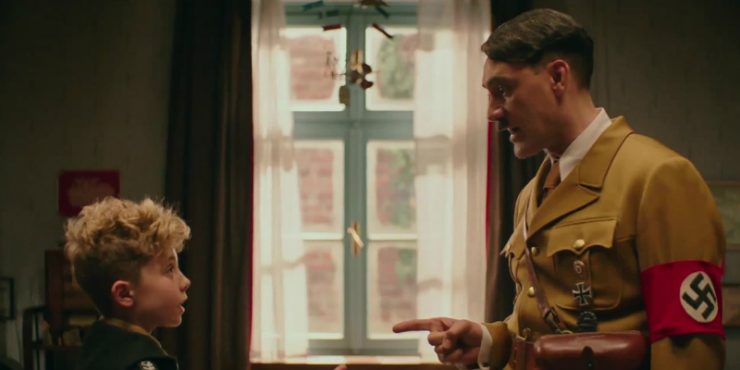 Nazi comedies are a bit of a third rail as far as mainstream comedies are concerned. To the extent that a few of them have been successful (The Great Dictator, The Producers, to a certain degree Inglourious Basterds), it’s usually because Nazis are played as sniveling imbeciles, set to be mocked (to put it mildly) at every stage. What Taika Waititi is attempting in Jojo Rabbit – to make a coming-of-age comedy from the point-of-view of a Nazi Youth – feels like something I’ve never seen. Only someone as popular as Waititi could ever be given a chance to make this kind of film, one that dares to make you laugh with swastikas all over the screen. Jojo Rabbit‘s anti-hate message is clear, but its methods are certainly unorthodox.

The film is based on a novel called Caging Skies by Christine Leunens, and is told exclusively through the perspective of an enthusiastic child Nazi named Johannes Beltzer (Roman Griffin Davis). ‘Jojo’ – as he’s called – is a Hitler superfan and a member of the Hitler Jungen, where he aspires to be an elite German soldier like his father, who is off fighting in World War II. But he is an outcast amongst the gung-ho German boys, who tease him as a wimp and challenge his father’s war record. When he’s dared to kill a rabbit to prove his ruthlessness, he’s unable to and is given the nickname “Jojo Rabbit”. Jojo’s closest friend is an imaginary version of Hitler (played in childish fashion by Waititi himself), who is quick to arise when Jojo is most down, always ready with encouragement.

Jojo lives alone with his mother, Rosie (a light, wonderful Scarlett Johansson), who is not afraid to state her displeasure with the war, even if her son is a model German fascist. Rosie misses her husband, and resents the war for taking him away. That said, she still raises Jojo with compassion and good humor, hoping to sow seeds of tolerance in her son for a peaceful time when the war finally ends. Things change drastically for Jojo when he discovers that Rosie is hiding a young Jewish girl named Elsa (Thomasin McKenzie) in the walls of their home. Terrified, but projecting an image of authority, Jojo tries to take control of the situation, but Elsa quickly takes charge, intimidating Jojo and proving him to be the scared little boy he’s always teased to be.

This is the third of Waititi’s five films that deals with alienated youth. Boy and Hunt for the Wilderpeople both dealt with frustrated young boys living in his native New Zealand, and while Nazi Germany is about as different a setting he could have chose, it’s obvious that Waititi finds this period ripe for comedy. Making his protagonist a Nazi really challenges his M.O. of pulling laughs out of the false bravado of pre-teen masculinity. There’s obviously a soft spot for those who do not fit into patriarchal, heteronormative versions of what boys should be, and placing this scenario into the Hitler Jungen really proves how committed Waititi is to these stories. (This seems a good time to point out a hilarious performance from Archie Yates, who plays Jojo’s only real friend, Yorki. Bates, a perfect example of Waititi’s talent for getting comedy from children, has only a few scenes but generates the film’s best and biggest laughs.)

The main arc of Jojo Rabbit is Jojo’s relationship with Elsa, how it shapes his perception of Jewish people, and how it conflicts with his relationship with make-believe Hitler. The film follows a standard plotline that suggests that oppressors can learn to love those they demonize by simply spending a reasonable amount of time with them. That said, this film is not Green Book. While it’s hopes and dreams may seem pie-in-the-sky optimistic, the realities of its characters are quite harsh, despite the film’s jovial mood, and certain realities are not discarded. This of course leads to awkward shifts in tone when Waititi has no choice to showcase the bleak horrors of Nazi Germany, especially the desperation near the war’s end.

I enjoyed this film. It seems to understand the daunting task of humanizing a Nazi youth without shying away from the responsibility that entails. That said, I’m not quite sure that Waititi and Jojo Rabbit actually pull it off. Characters like Jojo, or Captain Klenzendorf (a perfect Sam Rockwell) – Jojo’s indifferent Hitler Jungen captain – are meant to show that there is a small semblance of a noble spirit even within the most despicable of institutions. Their transitions from historically evil to individually graceful is sometimes mired in narrative short cuts that Waititi has little choice to resort to. Davis and Rockwell are so impossibly good in their work here, but I’m not sure any actor could be expected to pull off the kind of tricks that Waititi is asking from them.

Time will be Jojo Rabbit‘s best judge and it might be twenty years before we know if Waititi truly succeeded in what he wanted to do. It’s hard for me not to admire the film’s basic ethos – that humanity and compassion can topple hate and intolerance – even if it does feel unrealistic in our current climate. If nothing else, this further proves Waititi’s mastery of comedic ensembles, and his ability to get all his actors to work perfectly within the same wavelength of his funhouse style of comedy. The film’s general sweetness will likely be dampened for some who have no cause to laugh at Nazis (and I don’t blame them), but I do think that this is a legitimately audacious film from Waititi, who is willing to take a narrative gamble to promote love over hate.

Written for the Screen and Directed by Taika Waititi