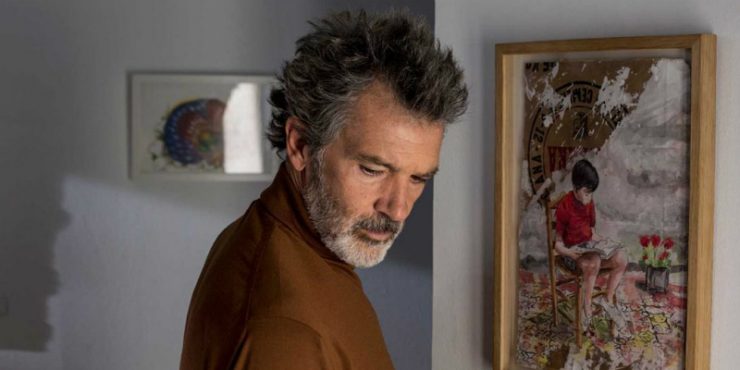 It’s tradition for storied filmmakers to look back later in life, and craft something “autobiographical”, though Pedro Almodóvar has seldom been described as traditional. Pain & Glory catches the Spanish filmmaker at his most reflective, following an aging film director (played beautifully by Antonio Banderas) fighting against melancholy and failing health, while his creative career flounders. He’s often requested for retrospectives and Q&A’s around the world but his chronic pain and somber mood keeps him at home, away from the rest of the world. His name is Salvador Mallo, an artist suddenly preoccupied by the seminal moments of his past. To his surprise, few of them have to do with the filmmaking career that made him so famous.

The events of Pain & Glory begin after Salvador revisits one of his most popular films, “Sabor”. Seeing it for the first time in decades, he is motivated to reach out to one of the film’s actors, Alberto Crespo (Asier Etxeandia). Salvador and Alberto had a falling out around the premiere of “Sabor”, but now that the film is being remastered by a local cinematheque, the older filmmaker wants to make amends with his former actor. The reunion is both pleasant and tense, neither seems willing to fully give up their grudge, though both seem committed to burying the hatchet. When Salvador decides to sample Alberto’s black tar heroin, he not only likes the way it eases his back pain and headaches, but develops a dependence that comes quick and hard.

Welcoming back an element of his cinematic life, Salvador becomes awash in memory. He begins to recall his childhood in a small Spanish village, where his mother (Penélope Cruz) pulled strings to get him an education despite their poverty. He details his childhood job as a teacher, tutoring a young, illiterate laborer (César Vincente) on how to read and write. He remembers a passionate affair with a man named Federico (Leonardo Sbaraglia), whose own heroin addiction caused a rift that ended their relationship and plunged Salvador into a prolific career to distract from heartache. Through all this, Salvador is left helpless, alone, and trapped in a body that appears to be failing him.

As Salvador explores his past, his present is filled with more reunions, more visits to the doctor, and more dabbles in heroin use. His assistant, Mercedes (Nora Navas), tries to fill the void of his dead mother, but Salvador is still enthralled by grief, along with everything else. This has caused a creative stasis he seems too lethargic to break out of. When Alberto discovers a word document on Salvador’s computer, he reads it without asking, and pleads to use it for a dramatic performance, but Salvador can hardly be bothered. Artistic ventures now wither quickly in his mind, as he becomes too preoccupied with his memories and pain.

To the degree that Salvador’s story is meant to be an “autobiography” of Almodóvar, Pain & Glory shows several parallels throughout a number of the Spanish director’s films, mostly Bad Education, All About My Mother, and even to a degree, Julieta. This is the thing about cinema as memoir: it usually reveals that their films have been autobiographical all along. But it still reveals how reflective Almodóvar himself has become with his last two films. Julieta and Pain & Glory are free from the sexuality and melodrama of most of his filmography. He explored the desires and fears of so many fictional characters, but in his latest film, he is directly exploring himself, which makes it quite the departure.

The films work best as a showcase for Antonio Banderas, whose performance of Salvador is so tremendously moving that it sublimates any attempt by Almodóvar to cheapen his confessional tale. Banderas forces Almodóvar to stay sincere, in earnest with his aching character. The veteran Spanish actor, whose film career originally flourished in Almodóvar’s scandalous sex comedies of the 80’s and 90’s, comes back to the auteur who gave him his start. To see them both here, much more tender and much more sentimental, is enough to make any cinephile yearn in nostalgic delight. But Banderas delivers something truly astonishing here, perhaps the best performance of his career.

Hollywood is filled with Hispanic actors that have languished because studios are never sure what to do with them. Banderas was a legitimate movie star in America, but he was never taken seriously as an actor, and he was certainly never allowed to be a Spanish Man. To play this part later in his career finally feels like the kind of creative opportunity that Banderas should have always had these past 30 years, but hardly ever got. Pain & Glory is the kind of quiet, modest film doomed to get misplaced amongst splashier options, even within Almodóvar’s canon, but this cannot be looked over. This is one of the most beautiful, effecting films of the year.

Written and Directed by Pedro Almodóvar