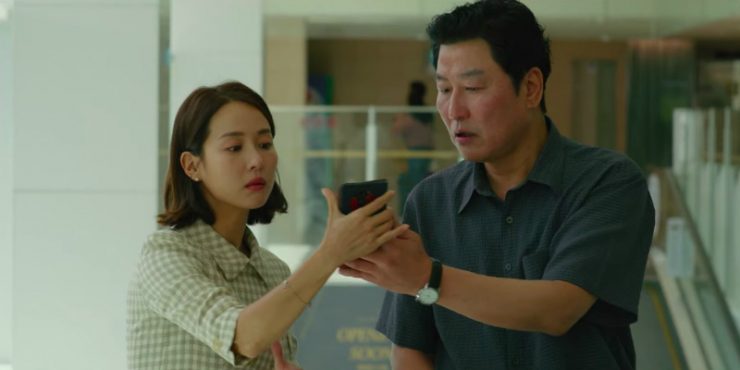 The satire at the heart of Parasite is not a difficult one to parse. Its ideas are shouted pretty clearly, even bluntly. In a way, the film is almost about the limits of satire, its inability to enact physical results. “How metaphorical!” several characters claim early in the film, and they’re right. It’s a film that tweaks the impenetrable, invisible borders between rich and poor, when it truly wants to demolish them and everyone who helped in their construction. The Palme d’Or winner from this year’s Cannes Film Festival lulls you in with its clever manipulations of class warfare narratives, before a brutalization occurs that leaves you with no doubt of the director’s motives. The director is Bong Joon-ho and Parasite may be the greatest vessel for his quirky, off-kilter style.

Bong is also the director of Snowpiercer, another metaphor for class disparity that replaced subtlety with certitude. His overtly political narratives (his Netflix film, Okja, is perhaps the most strident anti-meat industry movie I’ve ever seen come out of a major American distributor) are often spliced with dark humor and striking visuals, though Parasite is much more character based than those other two films. It centers on two families. The Kims are a good-humored clan who live in a semi-basement in a Korean slum. They get by snagging whatever employment they can find, and are not above the everyday con to get some cash. The Parks are a remarkably wealthy family, aided by success in American industry. Without great effort, one family learns to make great use of the other.

That the Parks are saddled with neurosis and paranoia about their status and livelihood plays to the Kims’ advantage, when Ki-woo (Choi Woo-shik), the Kim son, becomes an English tutor to Da-hye (Jung Ji-so), the daughter of the Parks. Da-hye’s mother, Mrs. Park (Cho Yeo-jeong) presents a house of parental order, though that facade is quickly proven a sham. Mr. Park (Lee Sun-kyun) is an important, successful business man who hopes his wife will settle all domestic matters, leaving Mrs. Park racked with nerves to make sure that their large, modernist home is as tranquil as it looks. Playing upon her insecurity, Ki-woo convinces Mrs. Park to hire a woman to be an art teacher for her young, undisciplined son, Da-song (Jung Hyun-joon). Unbeknownst to the Parks, that art teacher is actually Ki-wook’s sister, Ki-jeong (Park So-dam).

The Kims continue their infiltration, the children getting their father, Ki-taek (Song Kang-ho) to replace the family’s driver, and even more impressively, they get their mother, Chung-sook (Jang Hye-jin), to replace the Park’s dedicated housekeeper (Lee Jung-eun). Without realizing it, the Parks find themselves funding the entire Kim family. Despite their good fortune, the Kims’ deceptions begin to add up, as the peculiarities of the Parks give way to stunning realizations, and their clever tricks lead them into a dangerous place. In their attempt to fool the richest of the rich, the Kims end up getting sucked into their demented world of status, where truth and illusion begin to blur more than they ever imagined.

Like other Bong films, Parasite shifts rather rapidly between tones and moods without warning. The behavior of the Kims and the Parks can easily go from charming to despicable, sometimes within the same scene. In a moment, humor can turn to violence and then right back again. The constant fluctuation works perfectly within Bong’s amorphous world, where the rich are cluelessly feeding off the poor and the poor are consciously trying to steal from the rich. The whole system, as persistent as it is, proves unstable when the Kims get a taste of a wealthier life and their previous existence turns untenable. It’s a point blank target at capitalism, and its measurement of human value through material wealth.

Parasite can be didactic in its execution, forgetting the dexterity and originality of its screenplay (written by Bong and Han Jin-won) when it chooses to deliver its message. That said, the scope and vision of Parasite is striking and audacious. Its unflinching scorn is fierce, fire-breathing, leaving its audience with uncomfortable questions. It’s ensemble performance (I’d single out Song Kang-ho and Cho Yeo-jeong as particularly great) is strong, and totally in step with Bong’s concept and tonal alacrity. The film works both as a comedy and a truly political film, though I’m not sure Bong finds any of this actually funny.