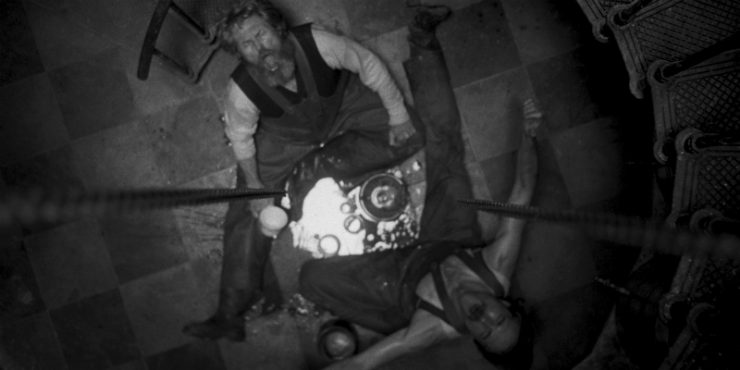 It feels odd to call a film like The Lighthouse beautiful. After all, it takes such refuge in its unseemliness. Its imagery is bleak, soiled and occasionally violent. But director Robert Eggers (The Witch) knows exactly how to frame them, and he makes something so stunning, built upon the contrasts that sit on the surface. Beautiful and ugly, real and surreal, black and white. The film is shot in black and white, in a tight, boxy aspect ratio that delves this dastardly tale further into claustrophobia. You can guess the setting from the title, and perhaps you can imagine the characters. There’s very little else one could predict about The Lighthouse before seeing it. It’s an exhilarating, truly unique film experience.

When two men take on four weeks at a lighthouse upon a stranded strip of rocks in the middle of the sea, they don’t even exchange their names. The older man (Willem Dafoe) has plenty of experience as a “wickie”, but his new, younger partner (Robert Pattinson) is a brand new recruit. It’s well within the film that we learn that the older man is named Tom and the younger one is named Ephraim, but names are not needed in the language of lighthouse-keeping. Tom is quick to berate Ephraim, demanding that his less-experienced companion stick to the dirtier, more menial work. Tom, himself, gets to handle the glamour of the light, and it’s a responsibility he is unwilling to share.

The Lighthouse‘s narrative is one-note – one punishing, unrelenting note. As the men’s stay on the island (“this rock” as Dafoe’s Tom calls it), their relationship become more and more volatile. Contention gives way to jovial camaraderie as the two men drink themselves into a stupor nearly every night. It’s as these moments that their relationship becomes more intimate, and they divulge feelings and secrets that they almost always regret the next day. Tom warns the young Ephraim about the possibility of going mad, but the warning feels flat coming from him since he doesn’t display the most sound mental capacity himself. As their temporary home is hammered by violent storms, their lives are scathing portraits of decay, their lodgings filling up with tension and bodily fluids.

Director Robert Eggers (he wrote the script with Max Eggers), shows a further dedication to period detail and cadence that showed in his previous film, The Witch. That film was much more beholden to a particularly stringent form of horror movie storytelling. The Lighthouse is much more unhinged, completely unbeholden to any argument for logic or reason. As our wickies descend deeper into their madness, the film is touched by Lynch-ian absurdities, including seductive mermaids and tentacle-laden creatures. Eggers crafts these images so spectacularly, with help from cinematographer Jarin Blaschke who drowns the film in ink-black shadows, and composer Mark Korven who fills the space with a droning, cacophonous film score.

Pattinson and Dafoe, so separate from each other in reputation and style, play ferociously off each other throughout, performing their violent swings in mood and decorum as a monstrous dance between two unstable individuals. Tom is perfect for Dafoe’s career-long mastery of intensity and vulnerability, authority and insecurity. Pattinson, playing the film’s more central character, is much more complicated. His gruff demeanor and plaintive work ethic quickly gives way to resentment and paranoia. Ephraim, we learn, is running from a past, and it’s when he chooses to bring that past onto the island with him and Tom that things really begin to go South.

The Lighthouse asks for a lot from its audience. Its imagery is grotesque and upsetting, its characters are harsh individuals who speak in such heavy dialect (accents are non-specific and can suggest several Western lands, but it was filmed in Nova Scotia) that one struggles to understand what they’re even saying. By the end of this whirring, maddening film, one should not expect many answers, and none arrive. Eggers interests are in how the elements of the image combine within the elements of the performance. The synergy of this equation creates one of  the most singular films I’ve seen this year. I never thought that something this ugly could be so enchanting.