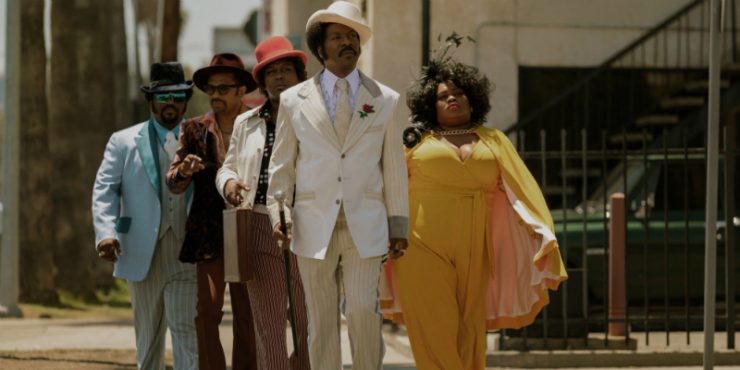 The arrival of Eddie Murphy in Dolemite is My Name has an exciting ring to it. It is both a return for Murphy toward more dangerous, R-rated comedy as well as a platform to showcase the true power of his talent as an actor and a comedian. But anyone who sees it would agree that Dolemite is spiritually closer to his friendlier, PG-13 films form the 90s. It shares those films’ sincerity and sentimentality. And frankly, I feel like Dolemite is all the better for it. Murphy’s affection for Rudy Ray Moore – the man who’s life he presents here – is obvious and overflowing, which translates well into the film’s modest production. The film feels as scrappy as Moore himself.

Moore moved to Hollywood from the South to abandon the scars of his past and become a celebrity. He tried everything: singing, dancing, stand-up comedy. Approaching middle age in the 1970’s, Moore’s only paycheck comes from a clerk job at a record store and occasional emcee gigs for local music acts. Never one to quit, he gets an idea for a character after listening to nearby homeless men spit rhyming yarns that lead to absurd but funny punchlines. From that, he creates Dolemite, a pimp with a dirty mouth and an oversized ego who waxes poetic about his sexual proclivity and general badass-edness. His general slogan: “Dolemite is my name, and fucking up motherfuckers is my game.”

Despite the vulgarity of his material, Moore develops a strong, dedicated fanbase that responds strongly to his anything-for-a-laugh sensibility. Always thinking bigger, Moore adds Lady Reed (Da’Vine Joy Randolph) to perform as Queen Bee, a sharp, equally dirty dose of femininity to his act. He includes all his friends as colleagues, including Toney (Tituss Burgess), Jimmy (Mike Epps) and Ben (Craig Robinson), working collaboratively to strengthen the full level of entertainment he’s interested in providing. When he decides to turn Dolemite into a movie, he runs into the usual roadblocks with the more formal channels, so he decides, once again, to do it on his own and make the picture with the people who know him, and Dolemite, the best.

As a biopic, Dolemite is My Name checks most boxes. It’s much stronger as a film about show business perseverance, and a performer who has a preternatural understanding of his audience. It’s also a document of the nature of independent cinema, particularly black independent cinema. Even the smaller studios that specialized in the era’s blacksploitation films, found Moore’s particular take crude and unworthy. Moore, Lady Reed and company truly scraped together the pieces to put together their film, running mostly on will and instinct to put it together. When they need some industry know-how they recruit a minor actor named D’Urville Martin (a wonderfully eccentric Wesley Snipes) to direct.

Directed by Craig Brewer (Hustle & Flow, Black Snake Moan), Dolemite is My Name is a modest but gaudy production, with hilarious, flaring costumes and unkempt make-up and hair. Homaging the films of Moore, it partly recreates them. But Brewer seems to understand well that this is Murphy’s film, a pet project that speaks not only to Murphy’s talent but also professes an ideal about comedy that Murphy holds dear. Moore’s humor is foul, occasionally shocking, and even though Murphy has acknowledged his own comedic misdeeds from the 80’s, he is still someone who appreciates the bombastic nature of a comedian like Moore, who always pushed the limit, because he knew that’s what his audience wanted.

This is not a great film, even though its ensemble is strong and shares Murphy’s enthusiasm for the subject matter. But I would argue that this is a great performance from Murphy, who allows his own persona to weave itself through the contours of Moore. Throughout the Dolemite performances, we see a lot of the things that Murphy himself has utilized – character creation, costuming, profanity – to shape his legendary career. Black success has always been a cornerstone to the stories that Murphy likes to tell and it’s probably why Dolemite feels completely smoothed out, a bit too free of any sharper edges. The film is closer to The Disaster Artist than Mario van Peebles’ Baadassss!, more interested in entertainment than truly explaining cinematic history. I’m sure that’s the way Moore would have preferred it.