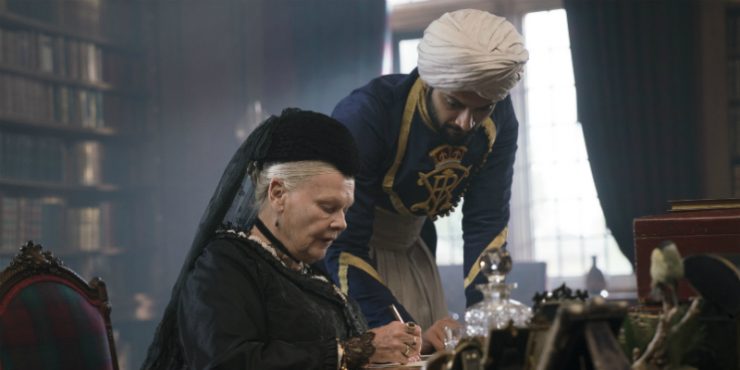 English film director Stephen Frears is one of the most dependable filmmakers in the world. In the 80’s and 90’s he made slick, provocative films like My Beautiful Laundrette, Dangerous Liasons and The Grifters. In the early 2000’s, he made High Fidelity and Dirty Pretty Things. This decade he has taken his place as a maker of officially light-hearted films whose sole purpose is to perpetuate an infantilizing obsession with English charm and nobility. He’s pretty good at these movies too, as The Queen and Philomena have shown. Victoria & Abdul is not like those films. The movie stars Judi Dench as Queen Victoria, fighting off her mortality and her boredom, burdened by loneliness and a litany of health issues. She suddenly finds solace in an Indian servant named Abdul Karim (Ali Fazal), who’s original purpose was to present the monarch with a honorary gift from India. Instead, their relationship blooms into something much more unique.

Victoria’s infatuation with Abdul is met with equal kindness from her new friend. Abdul is eternally grateful for the attention he is getting from the colonial Empress of his homeland, and she in turn is grateful for the company and expanded perspective he brings to her everyday life. She asks him to teach her his language, and gives him an official position as her instructor, fighting off protests from her head-of-household Sir Henry (Tim Pigott-Smith), and her son Albert, Prince of Wales (Eddie Izzard). The relationship creates a scandal in England, who wish to discourage Abdul and his influence. Abdul’s travel companion, Mohammed (Adeel Akhtar), is one of the most vocal critics of Abdul’s new position within the kingdom. When Abdul is named the Queen’s “Munshi” (Urdu for teacher), Mohammed is made Abdul’s official servant, adding an extra layer of indignation.

Victoria & Abdul‘s entire aesthetic is a bit sickening. The film takes an incredibly soft look at Britain’s colonizing of India, and its roles as oppressors in that country’s history. Abdul’s unwavering servility toward an old woman with a crush is showcased as noble and righteous, especially faced with the unleaded racism of Prince Albert. I found the whole thing very unsavory. It doesn’t help that the film is also incredibly dull and never goes anywhere you wouldn’t already expect. Dench’s performance is committed, but remember she has played this role before in the much-better Mrs. Brown, a more honest and riveting account of Queen Victoria’s storied reign. Screenwriter Lee Hall sticks Dench with the same overstuffed monologues that she’s done before, only now she doesn’t have the narrative heft to back it up. It’s just a greedy sovereign clinging to her kept brown man. This is easily the least impressive Stephen Frears film I’ve ever seen, a movie of such crushing mediocrity and utter ignorance of its complicated political position, it boggles the mind.