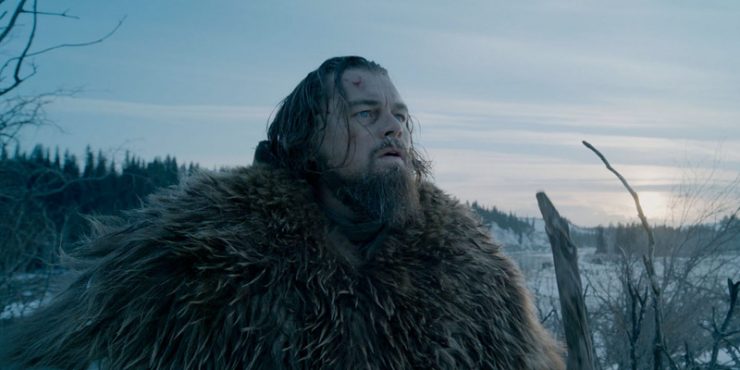 There’s an aspect of The Revenant that is really beautiful. Director Alejandro G. Iñárritu collaborated here with cinematographer Emmanuel Lubezki, who’s already one of the greatest DP’s in history. This is their second time working together after last year’s Birdman. That movie was shocking to anyone familiar with Iñárritu; that he could make anything as irreverent and funny as Birdman after a decade of maudlin melodramas. That film overachieved and won the Oscar for Best Picture (as well as Best Director for Iñárritu and Best Cinematography for Lubezki), and it showed the chemistry between the two Mexican-native film veterans. Their visual work together in The Revenant is probably better, more refined (I never cared much for Birdman‘s gimmicky, make-it-look-like-one-take aesthetic, and found it to be the movie’s most annoying tick), but that’s about all The Revenant has going for it. It’s a beautifully wrapped package with nothing meaningful inside. It’s also Iñárritu’s glorious return to the world of the miserable, to a universe in which the phrase “It can’t get any worse” should never be used. Only he would take the stunningly heroic tale of Hugh Glass and morph it into a brutal parade of carnage, a macabre affair with enough blood to fill Yellowstone river and enough dead horses to fill a circus tent. Add to all this, he gets Leonardo DiCaprio, the thirstiest actor in Hollywood, to play Glass. Between Iñárritu and DiCaprio, it’s almost impossible that The Revenant could have been any less vain, any less desperate in its clawing attempts to court prestige. It’s like they forgot that all they had to do was make a movie.

DiCaprio is one of our best screen actors and that’s due mostly to his hard work. He’s grabbed so many meaty parts since Titanic in 1997, it’s hard to remember the last time he’s ever taken a part just for the fun of making movies. It never seems like DiCaprio is right for any of the roles he plays, but he’s a committed performer, and often makes it work. He looks and sounds nothing like Howard Hughes and yet walks out of The Aviator with one of his greatest performances. When you think of an American slave owner, do you think of someone who looks like DiCaprio? There he is in Django Unchained playing the evil Calvin Candie, the movie’s best, most outlandish performance. Other than Catch Me If You Can andThe Wolf of Wall Street, is there a part that DiCaprio has taken that actually fits his mercurial public persona? It certainly isn’t The Revenant. The Hugh Glass of both history and Michael Punke’s novel (on which this film is very loosely based) is a gruff, well-experienced fur trapper who’s lore as a wilderness man is well known even before his famed incident with a grizzly bear. I’ve read Punke’s book, and the man he described certainly doesn’t look like DiCaprio, in particular the fact that Glass is an Irish-Scotsman. The novel has problems in its own right, mainly its strict rules of historical accuracy which robs you of a proper catharsis and begs you to ask ‘What is the point?’. I’d hoped that Iñárritu (along with scriptwriter Mark L. Smith) would craft a more satisfying, certainly more cinematic narrative, but what we got instead was an even more pointless exercise. At least Punke had the excuse of trying to dramatize history. Iñárritu and Smith are trying to dramatize grief and violence, with little actual story to be told.

The Revenant‘s story of which is being promoted across the world is a revenge tale. Hugh Glass is a famed fur trapper working for a hunting party led by Andrew Henry (Domhnall Gleeson). Over forty men are tracking unsettled American wilderness, collecting pelt for later sale. Glass brings along his son, Hawk (Forrest Goodluck), a half-Pawnee indian whom nearly all the party ignores. The Revenant opens with a scene of the trapping party being savagely attacked by a local Native American tribe. The scene recalls Spielberg’s opening toSaving Private Ryan, with all of the blood & guts and none of the heart. Only about a dozen of the men escape with their lives, boarding a boat and escaping along the river. One of the men is Fitzgerald (Tom Hardy), an ornery veteran hunter with gnarly scars from past indian battles. When Henry asks Glass what their plan should be, Glass recommends abandoning the boat and walking to safety on foot. Fitzgerald vehemently disagrees. Even after Henry orders the men off of the boat, the decision made, Fitzgerald is spitting with anger, turning his focus on Glass and Hawk. After Mad Max and Legend, 2015 was one of the very best years in Hardy’s short but impressive career, but The Revenant allows him none of the charm the English actor is capable of. The Fitzgerald of the script is a pig-headed man, talking much more than he should, and while he never says this specifically, every line of dialogue he speaks can be translated into “I’m the antagonist”. Hardy is nothing if not a dedicated actor, and his complete immersion creates something that is, instead of menacing and threatening, grating and uncouth. It’s the actor’s most mannered, least sophisticated performance.

The film’s true narrative begins on a morning that Hugh spends hunting in the woods. He sees a small collection of bear cubs, only to discover that their mother is standing right behind him. Thus begins one of the most difficult scenes I’ve ever seen in a movie. The bear’s attack of Hugh Glass is measured, meticulous but also ferocious. He bites, chews, scrapes, even stands atop Glass’ trembling body (watching the scene, I can finally understand how the hilarious rumor started that The Revenant included “bear rape”). Even taking a rifle shot to the neck doesn’t stop the bear’s quest to (literally) rip Hugh to shreds. It isn’t until Hugh takes a knife and plunges it into the bear several times that the attack finally come to a merciful end, and by the time he’s found by Hawk, Henry and the rest of the company, he seems as good as dead. But Glass perseveres, staying alive. Henry vows to keep pushing forward, carrying Glass on a makeshift stretcher, but the track is already too treacherous to also carry a soon-to-be dead man. Henry offers an extra salary to anyone willing to stay behind with Glass until he passes and give him a proper burial. Hawk, obviously, volunteers as well as a young man named Bridger (Will Poulter) who’s taken a liking to Hawk and Glass. When the rest of the men shirk away at staying, Fitzgerald opportunistically takes the job, stating he’d like the extra cash. Henry makes him swear that nothing will happen to Glass until he’s properly dead, and Fitzgerald agrees. The film’s first thirty minutes assures us that this will be a bad decision on Henry’s part.

I’d say most of the general movie-going public is aware of the actions in which Fitzgerald takes against Hawk and Glass when Bridger is out of sight (and if you don’t, I’ll lead you to discover this in the theater), but what is even more obvious to the audience is that a majority of the film is Glass’ harrowing journey across the wilderness to find Fitzgerald and collect his pound of flesh. He encounters different Native Americans – some of them nice but many of them not – as well as rival fur trapping troupes, but the most dangerous element turns out to be the elements themselves and the circumstances of his condition. An unmerciful snow, his throat stitches coming apart as he drinks water. He has to eat several raw animals (and the press has made it very known: he really ate raw animals ACTING), he crawls around on his hands and knees before crafting a cane out of a tree branch. There’s nothing about Hugh Glass’ journey that is easy, and there is nothing about The Revenant that is easy to watch. The film is a testament to how exhausted Iñárritu and DiCaprio want you to feel throughout.Perhaps Peter Travers will call me names, but the trials that The Revenant puts its audience through feels superfluous, and even more damning, feels uninteresting. The film is purely physical, every plot point is led by action, nothing is directed by dialogue. A lot of talk has been made of DiCaprio finally winning the Oscar he’s been so lecherously aiming for, but this is the least amount of actual acting I’ve ever seen Leo do. What’s there to play in a scene where you fall asleep inside the carcass of a dead dalmatian horse?

I don’t want to sound glib. The Revenant does have a lot of moments of tremendous filmmaking, and Iñárritu is a very good director who I actually enjoy more than even his most tepid critics, but this film feels like a confirmation of all those critics’ most based accusations. Iñárritu’s view of humanity can sometimes be so skewered toward suffering that you wonder how he expects us to join him in his spiritual optimism. I, for one, was almost offended that he asked here. The film’s script, it must be said, is on par with a bad episode ofGame of Thrones, which at its worst uses human lives (or more specifically, gruesome human deaths) as a currency to gain audience interest. Its attempts to wax existential about the human condition are transparently shallow. You cannot watch this film, and see all of the pointless killing and maiming, then walk away feeling like this was a film about the best of us. Nor can you reasonably state that this is a nihilistic portrayal, because its too busy grandstanding with angels floating down from heaven and meme-ready platitudes being repeated throughout. Again, I find myself asking what the point of all this is, and it keeps coming back to the same thing: the vanity of its director and star. More than anything, both of these artists (and they are artists, and good ones at that) want nothing more than to be considered important. The Revenant is an example of the danger of how that kind of thinking can affect filmmaking, and I think it’d be best if perhaps this actor/director tandem avoid working with each other in the future. There should be at least one person in a production worried about looking important, but there should also be one person worrying about the art.