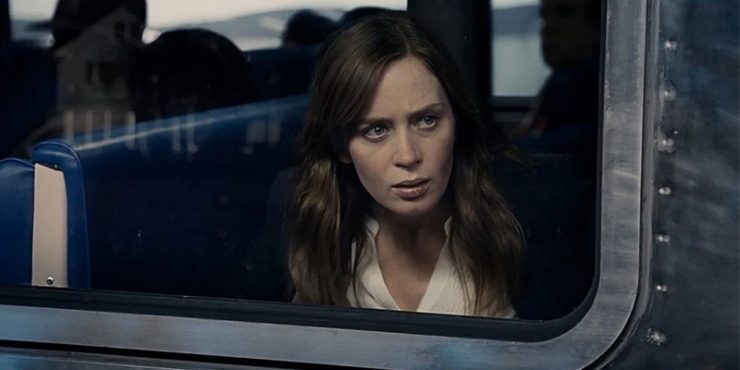 Paula Hawkins’ novel The Girl on the Train is the kind of not-very-good pulp fiction that is capable of making a very good movie. The book was packaged as a sort of further reading suggestion for fans of Gillian Flynn’s Gone Girl, but it’s not nearly as sarcastic or cruel. Any irony for the absurdity that is Hawkins’ book would have to be inferred; I rolled my eyes quite a bit working through it. Director Tate Taylor treats Girl on the Train like its the work of John le Carré, and he directs the film adaptation as if he’s homaging Hitchcock. The Girl on the Train didn’t need the David Fincher treatment, it needed the Douglas Sirk treatment. It needed a filmmaker that noticed that a sincere portrayal of this narrative could be nothing less than totally bonkers. It certainly didn’t need the Tate Taylor treatment. The Hollywood director can’t seem to decide if he’s making a bone-chilling thriller or a psychosexual melodrama. It manages to achieve both a removed chilliness and a ridiculous over-the-top-ness, and neither effect is executed properly. Taylor can handle the moral certitude of a film like The Help, but he’s coming to pieces here trying to arrange the complicated mess of sex, ethics and gender trouble being thrown around in this film. Girl on the Train is striving desperately for that tricky balance of sensuality and terror, but it doesn’t have the guts to be as crazy as, say, Fatal Attraction, and it doesn’t even have the decency to be legitimately shocking.

The film stars Emily Blunt as Rachel, the titular girl on the train. Every day, Rachel rides the Metro North into Manhattan (the book took place in England – the change is made all the more curious considering Blunt is keeping her English accent here), and every day she sees the home of Megan Hipwell (Haley Bennett), a beautiful young wife whom Rachel watches and imagines having an idyllic home life with her husband Scott (Luke Evans). The Hipwells live only a few houses down from Rachel’s ex-husband Tom (Justin Theroux), who is remarried to Anna (Rebecca Ferguson), whom Tom met when he was still married to Rachel. The newlyweds are raising a baby in the home Rachel used to live in. Rachel’s broken marriage has led to a devastating bout of alcoholism, and she spends her train rides and city-walking hours sipping straight vodka out of a plastic sippy cup. Her life is a horror show, and her one joy is watching the Hipwells, projecting the perfect marriage and the perfect life unto them. She loves to imagine them having the life that she wanted to have with Tom. Perhaps if they can have that life, not everything is hopeless. But after a particularly bad night of drinking, Rachel blacks out and wakes up in her bed with blood on her clothes and a gash on her head. She learns the next day that Megan has gone missing, and she was spotted drunkenly walking down the street where the Hipwells – and her ex-husband – live.

Rachel is shocked and unsure. How much of this blood is actually hers? She remembers seeing Megan on her terrace in the arms of another man, a therapist named Kamal Abdic (played by Venezuelan actor Édgar Ramirez – the script does next to nothing to explain why they’d cast the South American actor for a character with a name with obvious Arab origin). She tries to tell the lead officer on the missing persons case, Riley (Alison Janney), about Abdic, she even visits Megan’s home and talks to the irritable Scott, but her actions are always undermined by her drinking, her paranoia and the presence of Tom and Anna a few houses down. It’s not long before she becomes a suspect. The screenplay was written by Erin Cressida Wilson (noted for one good script, Secretary, and then a handful of bad ones), who was obviously instructed to try to stay as close to the best-selling book as possible. This is the trap of adapting popular novels. Too often, filmmakers are bound to placate book lovers while trying too hard to emulate a medium that entertains in a completely different way. Aside from that, Wilson’s screenplay is bad. Filled with shortcuts and obvious imagery, and a few changes from the book that not only make the story worse but don’t even seem to make sense. This is Rachel’s story, but Wilson’s attempt at an egalitarian split between the three main female characters fills the film with unnecessary, uninteresting backstory. Add to that, the film’s redundancies contribute to an interminability. The movie is boring, offensively so.

Emily Blunt is a criminally under-appreciated actress, who has the tools to be a movie star, but has never gotten the exact balance in terms of the right part in the right movie. She’s been great in films where she’s overshadowed by male co-stars (Edge of Tomorrow, The Five-Year Engagement), she’s been misused in otherwise terrific movies (Sicario) and she’s shined in definitively bad films (The Adjustment Bureau, Looper). The Girl on the Trainfelt like a kind of stars-aligning moment, and it probably will be her most successful film as the starring actress, but this is simply mediocre work she’s doing here. There are times when I question whether Blunt has ever been drunk let alone identified as an alcoholic, and while Rachel is meant to be a blubbering, pathetic character, Blunt rarely plays more than that one note. Blunt is trying here, but Taylor’s direction and Wilson’s script box the English actress into such a rote roll. That said, Blunt is all but complimented by the supporting performances from Bennett, Ferguson and Evans, who are all struggle to make anything out of such one-dimensional characters. Bennett is basically pared down into a guiltless sex object throughout the film and Evans is given two scenes of nonsense and performs accordingly. Ferguson’s Anna is such an infuriatingly misogynistic portrayal of “the other woman”, it’s hard to even see how any actress could do it well.