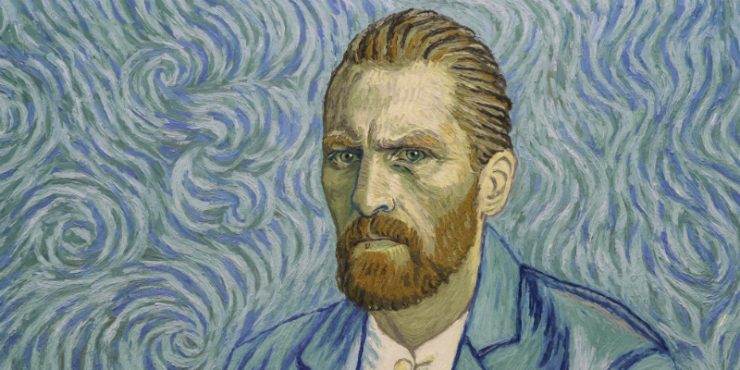 Loving Vincent announces itself as the first fully-painted feature film, no doubt an exhaustively labor-intensive enterprise which included shooting the entire script with actors in front of a green screen, editing it together, and then painting each individual frame. Animation is always difficult, but the effect within Loving Vincent is truly unique and often moving, using the function of the filmmaking itself to homage its hero: Vincent van Gogh. The entire movie is painted in his famous post-Impressionist style, with short, defined brush strokes, often recreating his most famous works.

The film’s plot is a noir-ish murder mystery surrounding the details of van Gogh’s suicide in 1890. Armand Roulin (Douglas Booth) is sent by his father, Joseph (Chris O’Dowd), to deliver a letter that the late van Gogh had sent to his brother Theo. Joseph, a postman who had a friendship with the painter, wants to see Vincent’s final writing get delivered, but needs Armand to hand deliver it. Upon arriving at the scene of van Gogh’s death, Armand meets an arrangement of characters, including his doctor, Dr. Gachet (Jerome Flynn), the doctor’s young daughter, Marguerite (Saoirse Ronan), a gossipy innkeeper (Eleanor Tomlinson), a boatman (Aidan Turner), and the doctor’s severe housekeeper (Helen McCrory), among others. All of these real people were subjects within van Gogh’s work, and often those works are reverse-engineered into the film’s story as the characters arise.

I couldn’t say how much of Loving Vincent‘s plot is whole cloth fiction. It’s circular biographical structure seems to mirror Citizen Kane almost exactly, but with more suspenseful intrigue. The film’s twists and turns do pay off in a beautiful third act that reveals a lot of the plot to be a red herring, and expresses all of the melancholy and human complication that was so essential to Vincent van Gogh’s incredible art. The film’s script is probably too plot-y at times, but that can be disregarded if you remember that Loving Vincent‘s main objective is its style of animation, which is delicate, precise and filled with great feeling about the subject. It’s a remarkable argument that the best way to tell an artist’s story is through that artist’s own work.