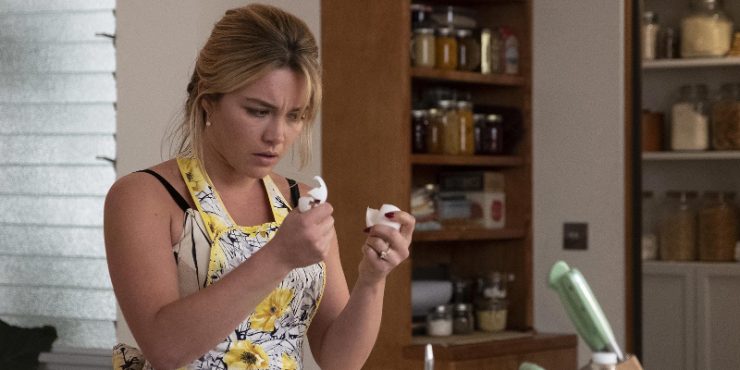 Too many words have already been written about the troubled production of Don’t Worry Darling. On-set feuds between director and star, certain ne’er-do-well actors releasing compromising voicemails, even a possible spitting controversy at the film’s tempestuous premiere at the Venice Film Festival. Too much, really, to review in detail here. Why the behind-the-scenes pyrotechnics with this film became so captivating to the public at large is something I still don’t understand. This isn’t the first time a movie was made under less-than-civil circumstances. It perhaps proves how much we still crave a peel into the lives of our movie stars, and with our movie stars dwindling by the second, those peeks are becoming fewer and far between. But if you’re hoping that the tension and drama has somehow enhanced the movie, you’ll be sorely disappointed.

The movie stars Florence Pugh, the English phenom whose meteoric rise in 2019 has led to this, her first lead in a major Hollywood movie. Pugh, a tremendous talent who in just a few years has been great across several genres, gives Don’t Worry Darling some legitimacy and tact. Even at age 26 she’s developed a reputation for being discerning with her choice of roles, and while she already proved she could lead a movie in Midsommar, this is the first time that a mainstream movie is opening on the basis of her starpower. Pugh plays Alice, a young housewife married to Jack (megawatt pop star Harry Styles). They live in a small but opulent 1950’s town run by the company Victory, which Jack works for. Alice is devoted, cooks their meals and cleans their stylish home, and when Jack comes home their sexual appetite for one another shows no sign of waning. The only rule? Alice, nor any of the other house-bound women can ever attempt to leave.

Alice can’t quite put her finger on it, but something doesn’t feel right. Sudden visions and detached voices disorient her in the middle of the day. On the surface, all seems grand. Her and Jack are happy, they have friends over for frequent drunken house parties. Their neighbor, Bunny (Olivia Wilde, who also directs), is Alice’s closest friend, and is quick to espouse the virtues of Victory. The company (and the town) was founded by the debonair Frank (Chris Pine), whose charismatic persona thinly veils a piercing intensity. All the men of the town hang on his every word, desperate for his approval, terrified of his reproach. Frank speaks often about how their existence is “changing the world”, but any evidence would be hard to find within Victory. Another of Alice’s friends, Margaret (KiKi Layne), begins to ask questions about what they’re all doing. What work do the men do? Where does all their food come from? Why can’t they ever leave?

Alice originally thinks Margaret is becoming hysterical, but she also can’t deny her own suspicions, a small voice nagging her to admit that there may be some substance to what Margaret is saying. But what is she saying? Unfortunately, I’m not sure the movie knows. There are times early and throughout Don’t Worry Darling that you may think you foresee where this story is headed, and you’ll probably be right to some extent, but it’s hard to predict just how thick-headed this movie’s final act is. Based on a spec script by brothers Cary and Shane Van Dyke, Wilde and screenwriter Katie Silberman remade the story in an effort to translate this Stepford-esque tale into a twenty-first century parable. I can’t speak for the Van Dyke script, but the current version is both a failure in world building and execution. Darling has much more conviction in its ideas than its actual story, and that proves to be the movie’s greatest downfall.

Perhaps the greatest irony is that the two figures said to have had the most animus on set, Pugh and Wilde, are also the two who have the best on-screen chemistry in the film. The two actors, portraying both sides of the faith and skepticism coin, come the closest to giving the movie an actual idea – namely, the degree to which women are willing to be complicit in their own captive domesticity – but they’re both pushing against a script that is much less nuanced than their performances. Only when they share scenes does the movie ever seem to approach the pastiche melodrama/sci-fi satire balance that the movie seems to be striving for. This isn’t particularly shocking for Pugh who’s sterling reputation precedes her, but it’s particularly puzzling how Wilde the actress can be so many steps ahead of Wilde the director.

This is her second feature after 2019’s Booksmart, which was a charming teen comedy and a surprise hit. The level up in budget and scope from Booksmart to Don’t Worry Darling is noticeable, and Wilde hires prestige cinematographer Matthew Libatique to craft her evocative imagery. This is a movie that, at times, can stun you with its visual flair, but it’s much harder to parse what any of it means or if it means anything at all. Several plot points and set pieces aren’t even red herrings as much as they are bang and flash signifying nothing. Wilde’s showy direction does nothing to buoy the floundering story or its aimless cast. Pine and Kate Berlant – as a needy, perpetually pregnant neighbor – escape with their dignity, but they are visably lost at sea. Much has been made of Styles’ stunted acting ability, but Layne, as well as Nick Kroll and Gemma Chan are equally as befuddling, never able to rise above the preposterous narrative.

Even the bad performances seem to be trying but Wilde and Silberling set them up for failure, forcing them to commit to scenes that even the best actors would struggle to make believable. It’s hard to see where the better version of this movie is, though it’s always tempting to see what the original script was meant to be. As it stands, Don’t Worry Darling corners itself by trying to be so haphazard with its targets. **SPOILER ALERT** It’s a wonky attack on incels, trolls and other heinous, male-dominated internet spaces, but its process is so confounding that it manages to make itself the more tiresome party. This film is fated to be one of those that’s more famous for it’s behind-the-scenes drama than anything that actually happens within it, and that may be for the best, if it means less people will be made to suffer through it.