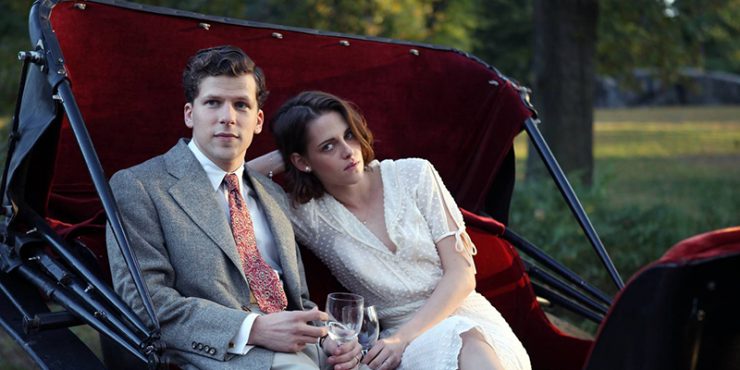 Woody Allen has finally achieved a complete separation between his films and reality, and his films now only exist in that ulterior universe. To the degree that Woody Allen movies are bad, they’re usually bad in relation to his other films. And even his few critical and commercial hits this century, like Midnight in Paris and Blue Jasmine, only work in that same relative way. His entire catalogue is a mirror onto itself. The New Yorker’s elite prolific filmmaking style (essentially a movie every year since 1969) has left many of his fans weary since his last great films from the 90’s. Themes are long past being reused, the stories he’s telling have been chewed and digested by him so many times, what’s left is a bland paste, too familiar and too lifeless to spell any entertainment. It’s possible that Woody has made a worse film than Cafe Society. There are so many of them, and it’s easy to forget the more pointless ones. But I can’t recall a Woody Allen film that gave me more scene-by-scene aggravation. Not a single scene in this film goes anywhere exciting, and even when it tries to, it gets bogged down in the same conversation pieces all his films get bogged down in. The actors are so locked into Woody-esque performance art, the cadence of the dialogue dictating their movements and emotions. Everything was too staged, too comfortably moving where the screenplay’s themes wanted it to go. Woody’s films used to have these kinds of performances and the characters still managed to feel like real people. At the very least, they used to feel like people we wanted to be. Today’s Woody Allen is still sidelined by the ideas of romance, the tempestuous nature of human relationships, but he has no new avenues with which to explore these ideas.

The film is narrated by Woody himself, who speaks omnisciently about the story as we watch it. It’s a device that Woody has relied on greatly in the last decade or so, which speaks to his weakening as a screenwriter. Third person narration can work in kitschy ways, but Woody is always one to use it directly, perhaps a little sincerely. His films didn’t used to need this kind of thing. The presence of Woody himself and the pointedness of his dialogue used to point us in the right way. Why does he insist on telling us where to go? The story being narrated is the story of Bobby (Jesse Eisenberg), a New Yorker who has abandoned his father’s business to live in sunny Los Angeles, where his uncle Phil (Steve Carrell) is a titan of an agent who supplies him with a job. To show Bobby around town, Phil asks Vonnie (Kristen Stewart), his beautiful assistant whom Bobby is immediately smitten with. One problem, Vonnie has a boyfriend. Back in New York, Bobby’s brother Benny (Corey Stoll) runs a night club which he’s acquired through a string of moves linked to his position in the mafia. Where Bobby is nebbish and squirrel-y, Benny is a broad-shouldered man who wears his shirt open at the dinner table and speaks with a cigarette hanging out of his mouth. How these two men are part of the same family is one of the more preposterous aspects of Woody’s script. As Benny climbs the ladder in the New York night club scene, Bobby begins to familiarize himself with the film industry. He meets a couple named Rad (Parker Posey) and Steve (Paul Schneider), who encourage him to pursue his interests in women, specifically Vonnie. She has a boyfriend? Who cares, follow your heart. This is a common theme in a lot of Woody’s films. The basic concept of the heart being a wily, unpredictable thing that can lead you into lustful trouble is seen so often in his films, but its almost always explored in the male characters. So often, women are abandoned in his films, collateral damage to a man’s unchained nature.The casting of Eisenberg is probably the film’s steepest hurdle. Eisenberg is an excellent actor, but his prickliness is too much to overcome here. Directors like David Fincher, Noah Baumbach and Joachim Trier in this year’s Louder Than Bombs, know how to reign in that neurotic exterior and push it into something human. In Cafe Society, he’s brash, obnoxious and makes the entire film such a tiresome exercise. Eisenberg can’t replicate Woody Allen’s comedic timing, but probably more importantly, he can’t replicate the sensuality. The magic trick that Woody could pull off in his 70’s films – that we believe that he could win women that look like Diane Keaton or Mia Farrow – is completely unapparent in Cafe Society. It’s even more frustrating when you consider that the cast has an actor who probably could pull this role off, in Corey Stoll, but Woody instead sticks Stoll in the violent role of Benny. While he’s never shied from parading beautiful women throughout his films, Woody still stands wholly against attractive men as his protagonists. When the film isn’t dwelling on Bobby’s aggressively uninteresting love life, it tries to make philosophical points about morality and mortality. This mostly comes through the form of the character of Leonard (Stephen Kunken), Benny and Bobby’s brother-in-law who espouses often about the meaning of life and human interaction, much like Sam Waterston’s blind rabbi in Woody Allen’s masterpiece Crimes and Misdemeanors. This film is NOT Crimes and Misdemeanors. That film had fascinating things to say about Judaism, the integrity of art and life, and the human condition. All these points are regurgitated here, but they’re hollow arguments. It doesn’t help that there simply isn’t enough material here to fill out a ninety-minute movie, and this often feels like a bad Raymond Carver story stretched out awkwardly over feature length. There are a lot allusions to the great Billy Wilder film The Apartment throughout this film, it even ends with a dramatic New Year’s Eve scene. Here’s some advice, save your money and just watch the brilliant Apartment at home. Life’s too short to watch mediocre movies.

Written and Directed by Woody Allen