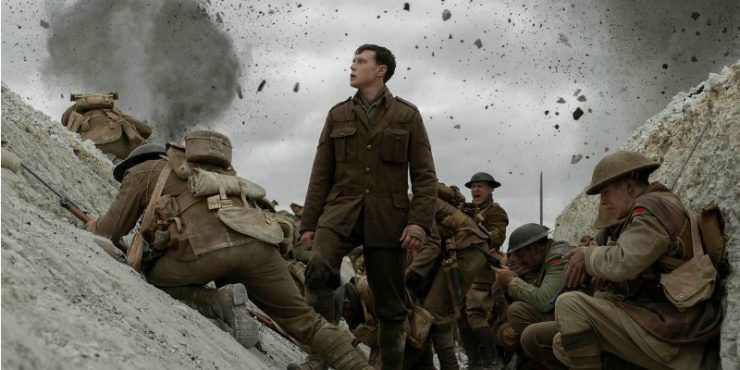 World War I – humanity’s greatest foible, a complete failure of dignity and reason, a brutal testament to the fatal power of ego and pride – is often judged too complicated for the movies to tackle. Its dividing lines are too murky, its violence too senseless, its politics too byzantine. Sam Mendes’ 1917 takes on this challenge with flagrant confidence, hoping to create a real-time sequence of events, where two men are tasked with saving the lives of thousands. It appears to be a suicide mission. They’ll be required to cross the German frontline to deliver news to their English brothers that they are being drawn into a deadly trap. Why send just two men for something so important? Like a lot of things in The Great War, the decisions seem reactionary at best and arbitrary at worst.

One of the two men, Lance Corporal Tom Blake (Dean-Charles Chapman) has an older brother in the ranks within the group heading into the ambush. Without knowing the mission, he enlists the help of fellow Lance Corporal Will Schofield (George MacKay). It seems clear that Blake is chosen because of his brother’s precarious position. Who else would accept such a foolhardy mission other than one hoping to save his family? Schofield is simply unlucky. He just happens to be sitting next to Blake when he is asked to bring along a partner. After being met with much skepticism from their peers, Blake and Schofield emerge from the English trenches and into enemy territory, hoping to pass on the message in time.

Time is a very important construct within 1917. Mendes and legendary cinematographer Roger Deakins have set up the story to appear like a single shot. The obvious skill and craftsmanship aside, the decision is meant to bring the audience into an immersive war experience. This is the first mainstream film to use this tactic since 2014’s Birdman (which won Best Picture), and like that film, the gimmick pulls off some interesting feats. In Birdman, it highlighted the emotional fragility and tense performances of its amazing cast. In 1917, it gives Mendes and Deakins an opportunity to flex their muscles in exciting ways. There are cuts, of course – there’s even a credited editor, Lee Smith – but the illusion is there.

I’ve never been a big fan of this kind of posturing, where the film itself draws attention to some of its more labor-intensive theatrics. Mendes, a director highly prone to visual interpretations, is a fan of experiments. He is often tying them up into visual metaphors that do better in theory than in practice. He won the Oscar twenty years ago for American Beauty, a film which today feels almost embarrassing in its over-direction, and here it’s clear that he doesn’t see the forest from the trees. Lost in the spectacle is the horror of WWI’s realities. Not to mention that Deakins’ camera movement is often deployed in such a monotonous north-south trajectory, that one could argue a cut here or there could add a semblance of excitement.

The film that comes most to mind when watching 1917 is Alfonso Cuarón’s Gravity from 2013. That film also used long takes (and hidden cuts) to prolong the anxiety of a woman’s mission to save her own life in the horror of outer space. That film felt much more immersive, and was a much more stressful sit – in a good way. It also, like 1917, suffered form a weak script that was simply a vessel for its excellent craftsmanship. But Gravity doesn’t have the burden of trying to recreate real atrocities (though it does have the benefit of a tremendous lead performance from Sandra Bullock), and 1917, for all its stunning set pieces, feels a bit hollow. An epigraph at the end suggests a familial connection between Mendes and this war, but the film itself only speaks toward a cinematic ego that can’t help itself.